From Infogalactic: the planetary knowledge core
Jump to: navigation, search
For other uses, see Scheherazade (disambiguation).

Scheherazade /ʃəˌhɛrəˈzɑːdᵊ/, or "Shahrazad" (Persian: شهرازاد - Šahrāzād‎‎), is a legendary queen and the storyteller of One Thousand and One Nights.

The story goes that Shahryar (Persian: شهریار - Šahryār‎‎, "server of the realm" or the king) found out one day that his first wife was unfaithful to him. Therefore, he resolved to marry a new virgin each day as well as behead the previous day's wife, so that she would have no chance to be unfaithful to him. He had killed 1,000 such women by the time he was introduced to Scheherazade, the vizier's daughter. 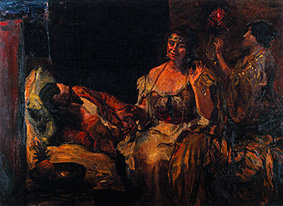 Scheherezade tells her stories by Max Slevogt (before 1897)

In Sir Richard Burton's translation of The Nights, Scheherazade was described in this way:

"[Scheherazade] had perused the books, annals and legends of preceding Kings, and the stories, examples and instances of bygone men and things; indeed it was said that she had collected a thousand books of histories relating to antique races and departed rulers. She had perused the works of the poets and knew them by heart; she had studied philosophy and the sciences, arts and accomplishments; and she was pleasant and polite, wise and witty, well read and well bred."

Against her father's wishes, Scheherazade volunteered to spend one night with the king. Once in the king's chambers, Scheherazade asked if she might bid one last farewell to her beloved sister, Dunyazade (Persian: دنیازاد - Donyāzād‎‎), who had secretly been prepared to ask Scheherazade to tell a story during the long night. The king lay awake and listened with awe as Scheherazade told her first story. The night passed by, and Scheherazade stopped in the middle of the story. The king asked her to finish, but Scheherazade said there was no time, as dawn was breaking. So, the king spared her life for one day to finish the story the next night. The next night, Scheherazade finished the story and then began a second, even more exciting tale, which she again stopped halfway through at dawn. Again, the king spared her life for one more day so she could finish the second story.

And so the King kept Scheherazade alive day by day, as he eagerly anticipated the finishing of the previous night's story. At the end of 1,001 nights, and 1,000 stories, Scheherazade told the king that she had no more tales to tell him. During these 1,001 nights, the king had fallen in love with Scheherazade. He spared her life, and made her his queen.

In explaining his spelling choice for the name, Burton says, "Shahrázád (Persian) = City-freer; in the older version Scheherazade (probably both from Shirzád = lion-born). Dunyázád = World-freer. The Bres[lau] Edit[ion] corrupts the former to Sháhrzád or Sháhrazád; and the Mac[naghten] and Calc[utta] to Shahrzád or Shehrzád. I have ventured to restore the name as it should be."[1] Having introduced the name, Burton does not continue to use the diacritics on the name.