Schlachtgeschwader 2 (SG 2) Immelmann was a Luftwaffe Dive bomber-wing of World War II. It was named after Max Immelmann, the first German pilot to earn the Pour le Mérite.

This close-support Stuka unit fought principally in the southern sector of the Eastern Front in places like Stalingrad and the Caucasus. The early two Schlachtgeschwader 1 and 2 were abbreviated SchlG, the reformed Stukageschwader in 1943 were abbreviated SG. The 4 SchlG Gruppen were integrated into the former Stuka (StG) and Schnellkampfgeschwader (SKG) to form SG 2, 4, 77 and 10.

In 1941, Stukageschwader 2 was transferred to the Eastern Front. On 26 June 1941, Stuka Geschwader 2 attacked 60 Soviet tanks south of Grodno, and later discovered that only one T-34 had been knocked out. During the rest of 1941 and 1942, the inadequacy of dive-bombing tanks became more evident. The most effective way to assault tanks from the air would appear with SG 2 in 1943. 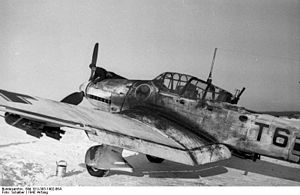 In late 1942, a Panzerjäger Staffel was formed within StG 2, which enjoyed such success that, after October 1943, a similar unit was added to each Stuka Geschwader. During the spring of 1943 SG 2 worked up with modified Ju87 G-1 'tank-busters' armed with two Rheinmetall-Borsig 37mm Flak 18 guns mounted under each wing. Prototypes were first used against Russian landing craft in the Black Sea area. In March 1943 Rudel knocked out the first tank with the new Stuka. The Ju87 G-2, based on the Ju87 D-5 with extended wingtips, replaced the Ju87 G-1 during 1944. This was a dedicated tank-buster, with no secondary dive-bombing role. 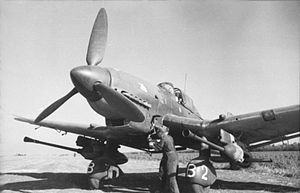 On 14 April 1943, Rudel was awarded the Oakleaves to his Knights Cross. SG 2 developed new tank-assault tactics, having found the best way to destroy tanks was to attack them from the rear or flanks.

Stab, I. and II. Gruppe SchlG 2, which was a completely different Geschwader and should have its own wiki page, all saw service over Tunisia, with all component Gruppen and Stab operating Bf 109E and F Jabo (fighter-bomber) versions. SchlG 2 later mostly formed SG 4.

By early 1944 II./SG 2 was covering the gradual Wehrmacht withdrawal around Kirovograd with II./JG 52.

As one of only two FW-190 equipped ground-attack gruppen on the Eastern Front, II./SG 2 was heavily involved in the 6-month Crimean campaign during 1944, and in addition to its usual ground-attack work flew numerous interception sorties, claiming some 247 Soviet aircraft shot down. Leutnant August Lambert claimed some 70 kills during one 3 week period.

By April 1945 Stab and II./SG 2 were based at Kummer, in northern Bohemia, while I./SG 2 was in Austria, and III./SG 2 near Prague. SG 2 had, despite little fuel and few aircraft, continued to support ground forces retreating in the east but by 8 May 1945, facing capture by the Soviets, Kommodore Oberst Rudel and his unit decided to try to reach the West to surrender to the Western Allies.

While a truck convoy would travel west with the unit's personnel, Rudel led three Ju 87s and four FW 190s westwards and landed safely at the USAAF airfield at Kitzingen. The ground column was later attacked and destroyed with few survivors.