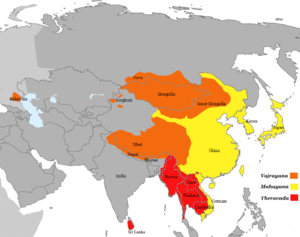 Schools of Buddhism refers to the various institutional and doctrinal divisions of Buddhism that have existed from ancient times up to the present. The classification and nature of various doctrinal, philosophical or cultural facets or schools of Buddhism is vague and has been interpreted in many different ways, often due to the sheer number (perhaps thousands) of different sects, subsects, movements, etc. that have made up or currently make up the whole of Buddhist traditions. The sectarian and conceptual divisions of Buddhist thought are part of the modern framework of Buddhist studies, as well as comparative religion in Asia.

From a largely English language standpoint, and to some extent in most of Western academia, Buddhism is separated into two groups at its foundation: Theravāda literally, "the Teaching of the Elders" or "the Ancient Teaching," and Mahāyāna, literally the "Great Vehicle." The most common classification among scholars is threefold, with Mahāyāna itself split between the traditional Mahāyāna teachings, and the Vajrayāna teachings which emphasize esotericism.

The Macmillan Encyclopedia of Religion distinguishes three types of classification of Buddhism, separated into "Movements", "Nikāyas" and "Doctrinal schools":[clarification needed]

The terminology for the major divisions of Buddhism can be confusing, as Buddhism is variously divided by scholars and practitioners according to geographic, historical, and philosophical criteria, with different terms often being used in different contexts. The following terms may be encountered in descriptions of the major Buddhist divisions:

"Conservative Buddhism"
an alternative name for the early Buddhist schools.
"Early Buddhist schools"
the schools into which Buddhism became divided in its first few centuries; only one of these survives as an independent school, Theravāda
"East Asian Buddhism"
a term used by scholars[1] to cover the Buddhist traditions of Japan, Korea, Singapore and most of China and Vietnam
"Eastern Buddhism"
an alternative name used by some scholars[2][page needed] for East Asian Buddhism; also sometimes used to refer to all traditional forms of Buddhism, as distinct from Western(ized) forms.
"Ekayāna (one yana)
Mahayana texts such as the Lotus Sutra and the Avatamsaka Sutra sought to unite all the different teachings into a single great way. These texts serve as the inspiration for using the term Ekayāna in the sense of "one vehicle". This "one vehicle" became a key aspect of the doctrines and practices of Tiantai and Tendai Buddhist sects, which subsequently influenced Chán and Zen doctrines and practices. In Japan, the one-vehicle teaching of the Lotus Sutra also inspired the formation of the Nichiren sect.
"Esoteric Buddhism"
usually considered synonymous with "Vajrayāna".[3] Some scholars have applied the term to certain practices found within the Theravāda, particularly in Cambodia.[4][page needed]
"Hīnayāna"
literally meaning "lesser vehicle." It is considered a controversial term when applied by the Mahāyāna to mistakenly refer to the Theravāda school, and as such is widely viewed as condescending and pejorative.[5] Moreover, Hīnayāna refers to the now non extant schools with limited set of views, practices and results, prior to the development of the Mahāyāna traditions. The term is currently most often used as a way of describing a stage on the path in Tibetan Buddhism, but is often mistakenly confused with the contemporary Theravāda tradition, which is far more complex, diversified and profound, than the literal and limiting definition attributed to Hīnayāna .[6] Its use in scholarly publications is now also considered controversial.[7] 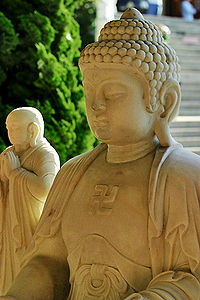 An image of Gautama Buddha with a swastika, a traditional Buddhist symbol of infinity, on his chest. Ananda, the Buddha's disciple, appears in the background. This statue is from Hsi Lai Temple.
Main articles: Nikaya Buddhism and Early Buddhist schools

The following lists the twenty sects described as Hīnayāna, as the classification is understood in some Mahāyāna texts:

Sthaviravāda split into the 11 sects:

The following later schools used the vinaya of the Dharmaguptaka:

The different schools in Theravāda often emphasize different aspects (or parts) of the Pāli canon and the later commentaries, or differ in the focus on and recommended way of practice. There are also significant differences in strictness or interpretation of the vinaya. 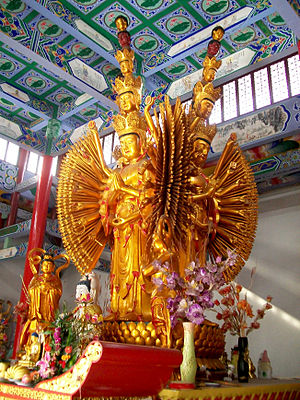