The district is twinned with the Finnish city of Kajaani, the British district of Sedgemoor, the Polish district of Pila and Rayon Rostov (Yaroslavl Oblast) in Russia.

The two rivers, the Schwalm and the Eder, give the district its name. After they merge close to Felsberg, the Eder enters the Fulda to the north at Edermunde. In the southeast of the district are the hills of the Knüll, where the highest elevation is 634 metres (2,080 ft). To the North are the hills of the Homberger Hochland. The center of the district is largely rural, and is surrounded by the mountains of the Knüll, the Stölzinger Gebirge, and the Kellerwald with the 675 metre-high Wüstegarten mountain. 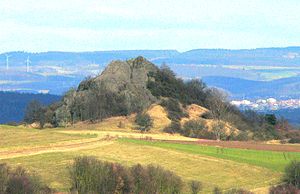 Scharfenstein, the basalt neck of an extinct volcano close to Gudensberg

To the east, the geology of Knüll mountains are dominated by the Triassic clastic formations of the Middle Buntsandstein, as are westly parts of the Gilserberg district.[2]

The soil of weathered Buntsandstein are generally acidic to slightly basic and nutrient-poor. For the most part the land is forested.

In the district of Fritzlar, there are younger outcrops of Upper Buntsandstein, which due to it red colour, is known as the Röt (Engl. Red (beds)). These outcrops consist of clay beds and different kinds of calcareous beds, interbedded with clayey marls.