From Infogalactic: the planetary knowledge core
Jump to: navigation, search
For the district, see Schweinfurt (district).

Schweinfurt (in German literally 'swine ford') is a city in the Lower Franconia region of Bavaria in Germany on the right bank of the navigable Main River, which is spanned by several bridges here, 27 km northeast of Würzburg.

The city was first documented in the year 790,[2] although as early as 740 a settlement called Villa Suinfurde was mentioned. In the 10th century Schweinfurt was the seat of a margraviate.[2] After the defeat of count Henry of Schweinfurt in 1002/1003, in the feud against King Henry II of Germany, his family lost its leading position in the town. In the first half of the 13th century Schweinfurt expanded to become a proper city with city wall, towers and city gates. At that time the Nikolaus hospital was founded, a mint was established and construction work on the Saint Johannis church began.[citation needed]

Around 1250 Schweinfurt was totally destroyed during a feud between the Earl of Henneberg and the Prince-Bishop of Würzburg. In the following years it was reconstructed. A document from 1282 signed by King Rudolf I of Habsburg states that Schweinfurt was a free city within the Holy Roman Empire. At least since then the coat of arms of Schweinfurt has been an imperial white eagle.[citation needed]

In 1309 the city was given to the Count of Henneberg, but in the 1360s the city regained its independence and joined the Swabian–Franconian Confederation. In 1397 King Wenzel entitled the town to utilize the River Main, and in 1436–1437 Schweinfurt acquired the village of Oberndorf, as well as the Teutonic Order Fort on the Peterstirn (the site of a former castle, derived from the monastery name stella Petri[3]) and a small piece of land – including the villages of Zell and Weipoltshausen. Some years later there was the first uprising of Schweinfurt's citizens against the town council, followed by a second in 1513–1514. This time the issuing of a constitution was allowed.[citation needed]

The city joined Martin Luther's Reformation in 1542. Schweinfurt was again destroyed in the course of the Second Margrave War, in 1554. The years up to 1615 were spent by the citizens for its reconstruction.[citation needed]

Schweinfurt joined the Protestant Union in 1609. In the Thirty Years' War it was occupied by Gustavus Adolphus, who erected fortifications, the remains of which are still extant.[2] In 1652 the four doctors Johann Laurentius Bausch, Johann Michael Fehr, Georg Balthasar Wolfahrt and Balthasar Metzger founded the Academia Curiosorum in Schweinfurt, which is known today as the German Academy of Life Scientists, "Leopoldina".

At some point Schweinfurt became a predominantly Roman Catholic city owing to migration from the surrounding Catholic territories, only again to receive a large section of Lutheran refugees/expellees after 1945 from Germany east of the Oder-Neisse line. The latest addition to the Lutheran churches in Schweinfurt arrived during the last years of the Soviet Union.[citation needed]

Schweinfurt remained a free imperial city until 1802, when it passed to the Electorate of Bavaria. Assigned to the grand duke of Würzburg in 1810, it was granted to the Kingdom of Bavaria four years later.[2] The first railway junction was opened in 1852. In the following years Schweinfurt became a world leading centre for the production of ball bearings. This was to lead to grievous consequences for the city during World War II.[citation needed] 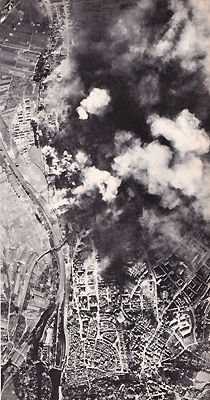 A USAAF raid on ball-bearing works in Schweinfurt in 1943

In 1939 Schweinfurt produced most of Nazi Germany's ball bearings, and factories such as the Schweinfurter Kugellagerwerke became a target of Allied strategic bombing during World War II to cripple tank[citation needed] and aircraft production. Schweinfurt was bombed 22 times during Operation Pointblank by a total of 2285 aircraft.[citation needed]

The Schweinfurt-Regensburg mission caused an immediate 34% loss of production[4] and all plants but the largest were devastated by fire. Efforts to disperse the surviving machinery began immediately and the Luftwaffe deployed large numbers of interceptors along the corridor to Schweinfurt.[5] Bombing also included the Second Raid on Schweinfurt on 14 October 1943 ("called Black Thursday because of the enormous loss of aircraft (60) and lives (600+)")[clarification needed] and Big Week in February 1944.

Although losses of production bearings and machinery were high and much of the industrial and residential areas of the city were destroyed, killing more than a thousand civilians, the factories were restored to production and the industry dispersed. Although German planners initially thought it essential to purchase the entire output of the Swedish ball-bearing industry, losses in the production of bearings were actually made up from surpluses found within Germany in the aftermath of the first raid. The decentralized industry was able to restore output to 85% of its pre-bombing level.[citation needed] Hitler made restoration of ball bearing production a high priority and massive efforts were undertaken to repair and rebuild the factories,[specify] partly in bomb-proof underground facilities.[citation needed]

After the war Schweinfurt became a stronghold of the US military and their dependants. Thus Schweinfurt recovered relatively quickly from its third period of destruction. Schweinfurt formerly hosted the U.S. Army Garrison Schweinfurt, which the U.S. Army closed on 19 September 2014 due to an ongoing effort to concentrate the U.S. military's footprint in Germany to fewer communities.[7]

Also in post-war years, the new suburbs of Bergl, Hochfeld and Steinberg were developed to settle a growing population. In 1954 the city laid the foundation stone for the new town hall and commemorated the 700th and 500th anniversaries of the two earlier periods of destruction as well as the ongoing reconstruction following World War II. In 1998 German and American veterans and survivors of the bombing raids came together to erect a war memorial to the fallen. 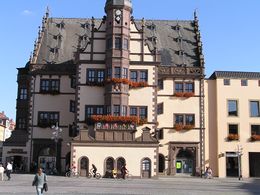 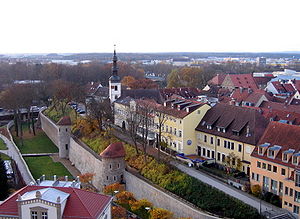 The Museum Georg Schäfer specializes in 19th-century paintings by artists from German-speaking countries.

The Schweinfurter Rathaus (town hall) square has a large Friedrich Rückert monument in the centre, around which weekly markets and many city festivals are held. A large number of people, including immigrants from many other countries, add to the crowded inner-city traffic-free Markthalle shopping area.

Motherwell Park connects the surrounding medieval buildings to the inner-city market square. To avoid car-filled streets, walking through the park with part of the original city walls offers paths and shortcuts, bringing one on foot from one end of town to another, reminiscent of medieval town life.

With GDP per capita of €78,382, Schweinfurt ranks third richest city in Germany after Wolfsburg and Frankfurt am Main.[8]

According to a recent study by the Swiss Institute of Economic Research forecasters Schweinfurt is one of the fastest growing cities in Germany. The study confirmed the city, among other things, the highest concentration of jobs in Germany with particularly high Beschäftiungsanteil (employment share) in the German high-tech sector. The Contor-2010 study, which was commissioned by the Manager magazine, ranked Schweinfurt as one of the most dynamic cities in Europe in terms of development opportunities. From rank 63 in 2007, the city significantly improved to rank 16 in 2010.[9]