Science On a Sphere 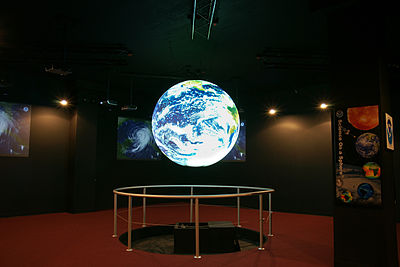 SOS in the Planet Theater at the NOAA Earth System Research Laboratory in Boulder, CO 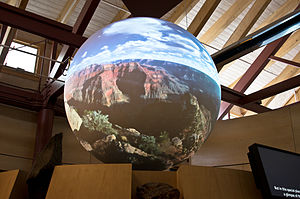 The Canyon World in the Science On a Sphere Theater at Grand Canyon Visitor Center.

Science On a Sphere (SOS) is a spherical projection system created by NOAA. It presents high-resolution video on a suspended globe rather than a flat screen, with the aim of better representing global phenomena.[1] Animated images of atmospheric storms, climate change, and ocean temperature can be shown on the sphere to explain these complex environmental processes. SOS systems are most frequently installed in science museums, universities, zoos, and research institutions, although new and novel uses for these systems in a variety of presentation spaces and contexts are starting to emerge.

The system is installed in more than 100 locations worldwide.[2]

SOS uses many off-the-shelf hardware and software components combined into an innovative format.[3] A spherical screen covered in ordinary latex paint hangs suspended in the center of a projection space. The screen is inert; it neither moves nor has any electronic parts. Surrounding the screen are four video projectors, positioned at ninety degree increments around the screen. Each projector is responsible for one quadrant of screen space. One CPU with three graphics cards (two for the projector output and one for the user interface) is used to control the system. The custom written SOS software runs on Linux.[4]

SOS was invented by Alexander E. MacDonald, the director of the National Oceanographic and Atmospheric Administration (NOAA) Earth System Research Laboratory in Boulder, CO, and OAR Deputy Assistant Administrator for the NOAA Research Laboratories and Cooperative Institutes.[5] MacDonald devised the original idea for Science On a Sphere in 1995 as part of other data visualization work he oversaw in what was the former NOAA Forecast Systems Laboratory. A small but highly motivated and inventive team of NOAA staff led by chief designer David Himes wrote the SOS software and developed the SOS hardware and system architecture. This work enabled MacDonald's invention to move out from the laboratory and into performance spaces. A patent was awarded to NOAA for Science On a Sphere in August 2005, with MacDonald credited as the inventor.[6] General system architecture and configuration specifications are as follows. http://sos.noaa.gov/Docs/SOSFloorplan.pdf

The carbon fiber sphere is 68 inches (1.7 m) in diameter. Other sphere sizes are possible, but would require custom engineering (at additional cost to the SOS recipient). The 68" sphere with a single seam at the equator weighs under 50 pounds (23 kg).[7] The sphere is attached to the ceiling or suspension structure with a three-point suspension system to hold the sphere in place and reduce lateral movement.[8] If the sphere moves, the images become un-focused. The cables are designed for strength yet small enough to blend into the background.

The system requires high quality, bright, long duty cycle projectors generally permanently installed in board rooms and high end home theaters rather than smaller portable and consumer models to endure the requirements of 8–10 hours per day, 7 days per week of most public displays. System designers also recommend a minimum of 3500 lumens.[9] The projectors used in the NC Aquarium installation use 4 Sony VPL-FE40 projectors rated at 4000 ANSI lumens costing over $4000 each.[10]

The computer hardware used for SOS is constantly evolving based on what is available on the market. The newest configuration uses one Ubuntu linux computer with NVIDIA GeForce graphics cards, a Wii Remote, and an iPad app to control the Science On a Sphere.[11] Previous versions used five Red Hat Linux computers.

The majority of SOS assets are so-called "datasets". Originally conceived as a video system for showing space based collections of Earth data, SOS has grown in its utility. The majority of data that traditionally appears on the SOS screens concerns the Earth, either from near-real-time data acquisition systems, or from processed remote sensing platforms. But recent interest and growth in different kinds of media have started to broaden that library.[12] There are currently over 250 datasets that can be shown on the sphere, including real-time infrared satellite images, Mars, real-time Earthquakes, an ocean acidification model, and many more. The entire catalog can be found online here: http://sos.noaa.gov/Datasets/. 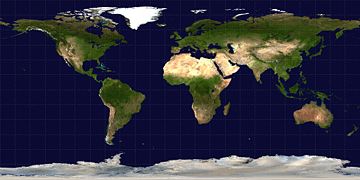 An equirectangular projection of the Earth; the standard parallel is the equator.

The data format for SOS datasets is the equidistant cylindrical equatorial projection, also referred to as equirectangular projection, as shown by the map to the right. Textures, or single images, such as Mars or the Moon, are jpeg or png files that have a minimum resolution of 2048x1024 and a preferred resolution of 4096x2048. Animations, such as a 24-hour air traffic loop or real-time weather over the course of a week, are mp4 files that have a preferred resolution of 2048x1024.[13]

All of the datasets for Science On a Sphere are available online in the SOS Dataset Catalog.[14] The datasets are divided into six main categories: Land, Ocean, Atmosphere, Astronomy, Models and Simulations, and Extras. The Extras category contains all the narrated movies highlighted below. The datasets come from many different organizations, including NOAA, NASA, NREL, universities, and science museums. Many of the sites that have SOS are creating new custom content for their site.

The National Oceanic and Atmospheric Administration NOAA supports the use of spherical display systems, such as SOS, in public exhibits as part of a focused effort to increase environmental literacy. The institutions that currently have NOAA's Science On a Sphere, as well as other partners who are creating content and educational programming for these systems, have formed a collaborative network . The SOS Users Collaborative Network is supported by NOAA’s Office of Education (OEd) and the NOAA Earth System Research Laboratory (ESRL) to provide a mechanism for these institutions to work together to maximize the effectiveness of the SOS system as an Earth system science education platform.[15]

NOAA’s Office of Education (OEd) hosts workshops of the SOS Users Collaborative Network in order to allow Network to inform NOAA on investment and development decisions related to the SOS system and to provide a mechanism for member institutions to work together to maximize the effectiveness of SOS as an Earth system science education platform. These workshops, which are typically 2.5 days in duration, provide a valuable opportunity for members of the Network to meet in person to focus on key issues. Past meetings have included:

The User's Collaborative Network is currently involved in a program-wide evaluation of the effectiveness of exhibits featuring spherical display systems. Many of the SOS sites have conducted their own evaluation reports as well to better understand the educational impacts of Science On a Sphere.[23]

Science On a Sphere is installed in science museums, zoos and aquariums, and visitors centers around the world.[24] New sites are continually being added:

In the Fall of 2005 the NASA Goddard Space Flight Center ordered what would become the eighth SOS to be permanently installed. Michael Starobin, Goddard's senior media producer at the time, began the process of developing a presentation that would showcase NASA data. Through the autumn of 2005 and into the winter of 2006, Starobin worked on collecting source material to craft this presentation. Faced with the challenge of producing a seamless product akin to traditional video programs, Starobin came up with the idea for presenting video content from source material that did not originate as inherently spherical data. The goal would be to blend one edge of a video or still photographic frame with the opposite edge in order to create a fully spherical image. In the beginning of 2006, a small but powerful team of NASA Goddard staff joined the project, including data visualizers from the Scientific Visualization Studio and master editor and digital artist Victoria Weeks. On May 4, 2006 the team unveiled Footprints, the world's first fully realized spherical film. The project demonstrated a number of dramatic new techniques for visual conceptualization, including the idea of a seamless visual wrap.[25][26]

Since the release of Footprints, several other movies have been made or are currently in production for SOS, including:

SOS Explorer, the desktop version of SOS for Windows and Mac computers, was released in September 2015 and is free for classroom or personal use.