From Infogalactic: the planetary knowledge core
Jump to: navigation, search
Not to be confused with Science publishing, Scientific communication, or Scholarly communication.
For the academic journal, see Science Communication.
File:Newtons cradle animation book 2.gif
An illustration of Newton's cradle in motion.

Science communication generally refers to public communication presenting science-related topics to non-experts. This often involves professional scientists (called "outreach" or "popularization"), but has also evolved into a professional field in its own right. It includes science exhibitions, journalism, policy or media production.

Science communication can aim to generate support for scientific research or study, or to inform decision making, including political and ethical thinking. There is increasing emphasis on explaining methods rather than simply findings of science. This may be especially critical in addressing scientific misinformation, which spreads easily because it is not subject to the constraints of scientific method.[1][2][3][4]

Science communicators can use entertainment and persuasion including humour, storytelling and metaphors.[3][4] Scientists can be trained in some of the techniques used by actors to improve their communication.[5] 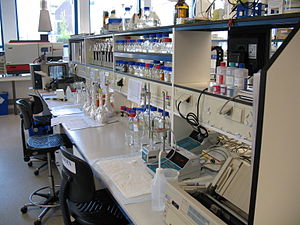 Science can benefit individuals with directly applicable skills and knowledge, by informing social policy, or simply by empowering the field of science itself. 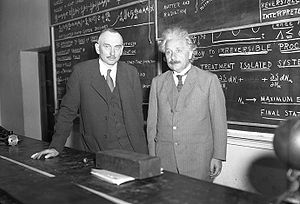 Critics worry that science education needs to be about more than facts, and must avoid ever becoming too authoritarian.

Writing in 1987, Geoffery Thomas and John Durant advocated various reasons to increase public understanding of science, or scientific literacy. If the public enjoyed science more, they suggested there would presumably be more funding, progressive regulation, and trained scientists. More trained engineers and scientists could allow a nation to be more competitive economically.[1]

Science can also benefit individuals. Science can simply have aesthetic appeal (e.g. popular science or science fiction). Living in an increasingly technological society, background scientific knowledge can help to negotiate it. The science of happiness is an example of a field whose research can have direct and obvious implications for individuals.[1]

Governments and societies might also benefit from more scientific literacy, since an informed electorate promotes a more democratic society.[1] Moreover, science can inform moral decision making (e.g. answering questions about whether animals can feel pain, how human activity influences climate, or even a science of morality).

Bernard Cohen points out potential pitfalls in improving scientific literacy. He explains first that we must avoid 'scientific idolatry'. In other words, science education must allow the public to respect science without worshiping it, or expecting infallibility. Ultimately scientists are humans, and neither perfectly altruistic, nor competent. Science communicators must also appreciate the distinction between understanding science, and possessing a transferable skill of scientific thinking. Indeed, even trained scientists do not always manage to transfer the skill to other areas of their life.

Cohen is critical of what has been called 'Scientism' – the claim that science is the best or only way to solve all problems. He also criticizes the teaching of 'miscellaneous information' and doubts that much of will ever be of any use, (e.g. the distance in light years from the earth to various stars, or the names of minerals). Much of scientific knowledge, particularly if it is not the subject public debate and policy revision, may never really translate to practical changes for the lives of the learners.[1]

Many criticisms of academic research in public understanding of science come from scholars in Science and Technology Studies. For example, Steven Hilgartner (1990)[2] argues that what he calls 'the dominant view' of science popularization tends to imply a tight boundary around those who can articulate true, reliable knowledge. By defining a deficient public as recipients of knowledge, the scientists get to contrast their own identity as experts. The process of popularisation is a form of boundary work. Understood in this way, science communication may explicitly exist to connect scientists with the rest of society, but its very existence only acts to emphasise it: as if the scientific community only invited the public to play in order to reinforce its most powerful boundary (according to work by Massimiano Bucchi or Brian Wynne).[6][7]

Biologist Randy Olson adds that anti-science groups can often be so motivated, and so well funded, that the impartiality of science organizations in politics can lead to crises of public understanding of science. He cites examples of denialism (for intsance of global warming) to support this worry.[3] Journalist Robert Krulwich likewise argues that the stories scientists tell are invariably competing with the efforts of people like Adnan Oktar. Krulwich explains that attractive, easy to read, and cheap creationist textbooks were sold by the thousands to schools in Turkey (despite their strong secular tradition) due to the efforts of Oktar.[4]

Walter Lewin demonstrates conservation of potential energy. It can be difficult to captivatingly share good scientific thinking as well as scientifically accurate information. Krulwich and Olson believe scientists must rise to that challenge using metaphor and story telling.[3][4]

Marine biologist and film-maker Randy Olson published Don't Be Such a Scientist: Talking Substance in an Age of Style. In the book he describes how there has been this unproductive negligence when it comes to teaching scientists to communicate. Don't be Such a Scientist is written to his fellow scientists, and he says they need to "lighten up". He adds that scientists are ultimately the most responsible for promoting and explaining science to the public and media. This, Olson says, should be done according to a good grasp of social science; scientists must use persuasive and effective means like story telling. Olson acknowledges that the stories told by scientists need not only be compelling, but also accurate to modern science - and says this added challenge must simply be confronted. He points to figures like Carl Sagan as effective popularizers, partly because such figures actively cultivate a likeable image.[3]

As his commencement address to Caltech students, journalist Robert Krulwich delivered a speech entitled "Tell me a story". Krulwich says that scientists are actually given many opportunities to explain something interesting about science or their work, and that they must seize such opportunities. He says scientists must resist shunning the public, as Sir Isaac Newton did in his writing, and instead embrace metaphors the way Galileo did; Krulwich suggests that metaphors only become more important as the science gets more difficult to understand. He adds that telling stories of science in practice, of scientists' success stories and struggles, helps convey that scientists are real people. Finally, Krulwich advocates for the importance of scientific values in general, and helping the public to understand that scientific views are not mere opinions - but hard won knowledge.[4]

Actor Alan Alda helps scientists and PhD students get more comfortable with communication with the help of drama coaches (they use the acting techniques of Viola Spolin).[5]

File:The Selfish Gene3.jpg
In the preface of The Selfish Gene, Richard Dawkins wrote: "Three imaginary readers looked over my shoulder while I was writing, and I now dedicate the book to them. [...] First the general reader, the layman [...] second the expert [and] third the student". 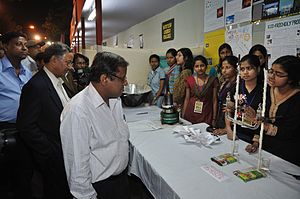 Students explain science projects to visitors. Susanna Hornig promotes the message that anyone can meaningfully engage with science, even without going as deeply into it as the researchers themselves do.[8]

Many criticisms of the public understanding of science movement have emphasised that this thing they were calling the public was somewhat of a (unhelpful) black box. Approaches to the public changed with the move away from the public understanding of science. Science communication researchers and practitioners now often showcase their desire to listen to non-scientists as well as acknowledging an awareness of the fluid and complex nature of (post/late) modern social identities.[9] At the very least, people will use plurals: publics or audiences. As the editor of Public Understanding of Science put it in a special issue on publics:

We have clearly moved from the old days of the deficit frame and thinking of publics as monolithic to viewing publics as active, knowledgeable, playing multiple roles, receiving as well as shaping science. (Einsiedel, 2007: 5)[10]

However, Einsiedel goes on to suggest both views of the public are ‘monolithic’ in their own way; they both choose to declare what something called the public is. Public understanding of science might have ridiculed publics for their ignorance, but an alternative "public engagement with science and technology" romanticises its publics for their participatory instincts, intrinsic morality or simple collective wisdom. As Susanna Hornig Priest (2009)[8] concludes in her recent introduction essay on science’s contemporary audiences, the job of science communication might be to help non-scientists feel they are not excluded as opposed to always included; that they can join in if they want, rather than that there is a necessity to spend their lives engaging.

The process of quantifiably surveying public opinion of science is now largely associated with the public understanding of science movement (some would say unfairly[11]). In the US, Jon Miller is the name most associated with such work and well known for differentiating between identifiable ‘attentive’ or ‘interested’ publics (that is to say science fans) and those who do not care much about science and technology. Miller’s work questioned whether American publics had the following four attributes of scientific literacy:

In some respects, John Durant’s work surveying British public[13] applied similar ideas to Miller. However, they were slightly more concerned with attitudes to science and technology, rather than just how much knowledge people had. They also looked at public confidence in their knowledge, considering issues such as the gender of those ticking don’t know boxes. We can see aspects of this approach, as well as a more "public engagement with science and technology" influenced one, reflected within the Eurobarometer studies of public opinion. These have been running since 1973 to monitor public opinion in the member states, with the aim of helping the preparation of policy (and evaluation of policy). They look at a host of topics, not just science and technology but also defence, the euro, enlargement of the European Union and culture. Eurobarometer’s recent study of Europeans’ Attitudes to Climate Change[14] is a good example. It focuses on respondents’ ‘subjective level of information’; asking ‘personally, do you think that you are well informed or not about…? rather than checking what people knew.

Science communication can be analysed through frame analysis, a research method used to analyse how people understand situations and activities.

Some features of this analysis include: