Science studies is an interdisciplinary research area that seeks to situate scientific expertise in broad social, historical, and philosophical contexts. It uses various methods to analyze the production, representation and reception of scientific knowledge and its epistemic and semiotic role.

Similar as in cultural studies, science studies are defined by the subject of their research and encompass a large range of different theoretical and methodological perspectives and practices. The interdisciplinary approach may include and borrow methods from the humanities, natural and formal sciences, from scientometrics till ethnomethodology or cognitive science. Science studies have a certain importance for evaluation and science policy. The field added technology in the last decade, and using science, technology and society, started to involve the interaction of expert and lay knowledge in the public realm.[1]

The field started with a tendency toward navel-gazing: it was extremely self-conscious in its genesis and applications.[1] Beyond a mere study of scientific discourse, it soon started to deal with all of its participants, relation of science expertise to politics and lay people.[1] Practical examples include bioethics, Bovine Spongiform Encephalopathy (BSE), pollution, global warming,[2][3] biomedical sciences, physical sciences, natural hazard predictions, the (alleged) impact of the Chernobyl disaster in the UK, generation and review of science policy and risk governance and its historical and geographic contexts.[1] While staying a discipline with multiple metanarratives, the fundamental concern is about the role of the perceived ̳expert‘ in providing governments and local authorities with information from which they can make decisions.[1] The approach poses various important questions about what makes an expert and how experts and their authority is to be distinguished from the lay population and interacts with the values and policy making process in liberal democratic societies.[1]

Science is not democratic per se, neither is sound science restricted to democracies. Science has become a major force in Western democratic societies, which depend on innovation and technology but need as well (compare Risk society) to address its risks.[10] Beliefs about science can be very different from those of the scientists themselves, for reasons of e.g. moral values, epistemology or political motivations.[1] The designation of expertise as authoritative in the interaction with lay people and decision makers of all kind is not a given.[11] It is rather difficult for scientists themselves to develop and communicate (in) interdisciplinarity contexts, as this sort of "Interactional expertise" is a separate kind of knowledge.[12]

History of the field

Maria Ossowska and Stanislaw Ossowski started to introduce the concept in the 1930s.[13] Thomas Kuhn's Structure of Scientific Revolutions (1962) led to an increased interest in not only the history of science, but also its philosophical underpinnings. Kuhn's work established that the history of science was less a linear succession of discoveries, but rather the concept of paradigms to the philosophy of science. Paradigms are broader, socio-intellectual constructs that determine which types of truth claims are permissible. Science studies try to identify crucial dichotomies as in science and technology, nature and culture, theories and experiments; science and fine art leading to the separation of various science fields and practices. Sociology of scientific knowledge developed at the University of Edinburgh, where David Bloor and his colleagues developed what has been termed the 'strong programme'. The strong programme proposed that both 'true' and 'false' scientific theories should be treated the same way.[14] Both are caused by social factors or conditions, such as cultural context and self-interest.[15] All human knowledge, as something that exists in the human cognition, must contain some social components in its formation process.[16]

It proved however difficult to address natural science topics with sociologist methods, as proven by the US science wars.[17] The use of a deconstructive approach (as for works on arts or religion) on natural sciences risked to endanger not only the "hard facts" of natural sciences, but as well the objectivity and positivist tradition of sociology itself.[17] The view on scientific knowledge production as a (at least partial) social construct was not easily accepted.[1] Latour and others identified a dichotomy crucial for modernity, the division between nature (things, objects) as being transcendent, allowing to detect them, and society (the subject, the state) as immanent as being artificial, constructed. The dichotomy allowed for a mass production of things (technical-natural hybrids) and large scale global issues that in the meanwhile threaten endangered the distinction as such. E.g. We Have Never Been Modern asks to reconnect the social and natural worlds returning to the premodern use of "thing" [18] - addressing objects as hybrids made and scrutinized by the public interaction of people, things and concepts.[19]

More recently, a novel approach known as mapping controversies has been gaining momentum among science studies practitioners, and was introduced as a course for students in engineering,[21][22] and architecture schools.[23] in 2002 Harry Collins and Robert Evans asked for a third wave of science studies (a pun on The Third Wave), namely studies of expertise and experience answering to recent tendencies to dissolve the boundary between experts and the public.[24]

Application on natural and man made hazards 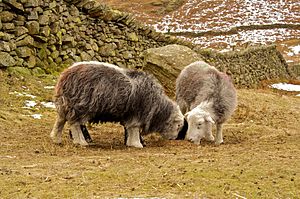 A showcase of the rather complex problems of scientific information and its interaction with lay persons is Brian Wynne's study of Sheepfarming in Cumbria after the Chernobyl disaster.[1][25] He elaborated on the responses of sheep farmers in Cumbria, who had been subjected to administrative restrictions because of radioactive contamination, allegedly caused by the nuclear accident at Chernobyl in 1986.[25] The sheep farmers suffered economic losses and their resistance against the regulation imposed was being deemed irrational and not adequate.[25] It turned out that the source of radioactivity was actually the Sellafield nuclear reprocessing complex; thus, the experts who were responsible for the duration of the restrictions were completely mistaken.[25] The example lead to various attempts to better involve local knowledge and experience of lay people and to assess its often highly geographically and historically defined background.[26] 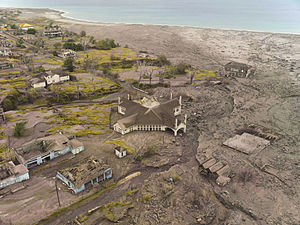 The aftermath of the 2007 Soufrière Hills eruption in Montserrat

Donovan et al. (2012) used and described the STS respectively science studies for social studies of volcanology and the generation of knowledge and expert advice on various active volcanoes.[1] It contains a survey of volcanologists carried out during 2008 and 2009 and interviews with scientists in the UK, Montserrat, Italy and Iceland during fieldwork seasons. Donovan et al. (2012) asked the experts about the felt purpose of volcanology and what they considered the most important eruptions in historical time. The survey tries to identify eruptions that had an influence on volcanology as a science and to assess the role of scientists in policymaking.[1] A main focus was on the impact of the Montserrat eruption 1997. The eruption, a classical example of the Black Swan Theory [27] directly killed (only) 19 persons. However the outbreak had major impacts on the local society and destroyed important infractructure, as the island's airport.[28] About 7,000 people, or two-thirds of the population, left Montserrat; 4,000 to the United Kingdom.[29] The Montserrat case put immense pressure on volcanologists, as their expertise suddenly became the primary driver of various public policy approaches.[1] The STS approach provided valuable insights in that situation.[1] There were various miscommunications among scientists. Matching scientific uncertainty (typical of volcanic unrest) and the request for a single unified voice for political advice was a challenge.[1] The Montserrat Volcanologists began to use statistical elicitation models to estimate the probabilities of particular events, a rather subjective method, but allowing to synthesizing consensus and experience-based expertise step by step.[1] It involved as well local knowledge and experience.[1]

Volcanology as a science currently faces an shift of its epistemological foundations of volcanology. The science started to involve more research into risk assessment and risk management. It requires new, integrated methodologies for knowledge collection that transcend scientific disciplinary boundaries but combine qualitative and quantitative outcomes in a structured whole.[30]