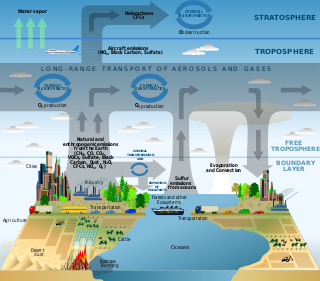 Example of scientific modelling. A schematic of chemical and transport processes related to atmospheric composition.

Scientific modelling is a scientific activity, the aim of which is to make a particular part or feature of the world easier to understand, define, quantify, visualize, or simulate by referencing it to existing and usually commonly accepted knowledge. It requires selecting and identifying relevant aspects of a situation in the real world and then using different types of models for different aims, such as conceptual models to better understand, operational models to operationalize, mathematical models to quantify, and graphical models to visualize the subject. Modelling is an essential and inseparable part of scientific activity, and many scientific disciplines have their own ideas about specific types of modelling.[1][2]

There is also an increasing attention to scientific modelling[3] in fields such as science education, philosophy of science, systems theory, and knowledge visualization. There is growing collection of methods, techniques and meta-theory about all kinds of specialized scientific modelling.

A scientific model seeks to represent empirical objects, phenomena, and physical processes in a logical and objective way. All models are in simulacra, that is, simplified reflections of reality that, despite being approximations, can be extremely useful.[4] Building and disputing models is fundamental to the scientific enterprise. Complete and true representation may be impossible, but scientific debate often concerns which is the better model for a given task, e.g., which is the more accurate climate model for seasonal forecasting.[5]

Attempts to formalize the principles of the empirical sciences use an interpretation to model reality, in the same way logicians axiomatize the principles of logic. The aim of these attempts is to construct a formal system that will not produce theoretical consequences that are contrary to what is found in reality. Predictions or other statements drawn from such a formal system mirror or map the real world only insofar as these scientific models are true.[6] [7]

For the scientist, a model is also a way in which the human thought processes can be amplified.[8] For instance, models that are rendered in software allow scientists to leverage computational power to simulate, visualize, manipulate and gain intuition about the entity, phenomenon, or process being represented. Such computer models are in silico. Other types of scientific model are in vivo (living models, such as laboratory rats) and in vitro (in glassware, such as tissue culture).[9]

Modelling as a substitute for direct measurement and experimentation

Models are typically used when it is either impossible or impractical to create experimental conditions in which scientists can directly measure outcomes. Direct measurement of outcomes under controlled conditions (see Scientific method) will always be more reliable than modelled estimates of outcomes.

Structure is a fundamental and sometimes intangible notion covering the recognition, observation, nature, and stability of patterns and relationships of entities. From a child's verbal description of a snowflake, to the detailed scientific analysis of the properties of magnetic fields, the concept of structure is an essential foundation of nearly every mode of inquiry and discovery in science, philosophy, and art.[11]

A system is a set of interacting or interdependent entities, real or abstract, forming an integrated whole. In general, a system is a construct or collection of different elements that together can produce results not obtainable by the elements alone.[12] The concept of an 'integrated whole' can also be stated in terms of a system embodying a set of relationships which are differentiated from relationships of the set to other elements, and from relationships between an element of the set and elements not a part of the relational regime. There are two types of system models: 1) discrete in which the variables change instantaneously at separate points in time and, 2) continuous where the state variables change continuously with respect to time.[13]

Modelling refers to the process of generating a model as a conceptual representation of some phenomenon. Typically a model will refer only to some aspects of the phenomenon in question, and two models of the same phenomenon may be essentially different, that is to say that the differences between them comprise more than just a simple renaming of components.

Such differences may be due to differing requirements of the model's end users, or to conceptual or aesthetic differences among the modellers and to contingent decisions made during the modelling process. Considerations that may influence the structure of a model might be the modeller's preference for a reduced ontology, preferences regarding statistical models versus deterministic models, discrete versus continuous time, etc. In any case, users of a model need to understand the assumptions made that are pertinent to its validity for a given use.

The term "assumption" is actually broader than its standard use, etymologically speaking. The Oxford English Dictionary (OED) and online Wiktionary indicate its Latin source as assumere ("accept, to take to oneself, adopt, usurp"), which is a conjunction of ad- ("to, towards, at") and sumere (to take). The root survives, with shifted meanings, in the Italian sumere and Spanish sumir. In the OED, "assume" has the senses of (i) “investing oneself with (an attribute), ” (ii) “to undertake” (especially in Law), (iii) “to take to oneself in appearance only, to pretend to possess,” and (iv) “to suppose a thing to be.” Thus, "assumption" connotes other associations than the contemporary standard sense of “that which is assumed or taken for granted; a supposition, postulate,” and deserves a broader analysis in the philosophy of science.[citation needed]

See also: Models of scientific inquiry § Choice of a theory

A model is evaluated first and foremost by its consistency to empirical data; any model inconsistent with reproducible observations must be modified or rejected. One way to modify the model is by restricting the domain over which it is credited with having high validity. A case in point is Newtonian physics, which is highly useful except for the very small, the very fast, and the very massive phenomena of the universe. However, a fit to empirical data alone is not sufficient for a model to be accepted as valid. Other factors important in evaluating a model include:[citation needed]

People may attempt to quantify the evaluation of a model using a utility function.

Visualization is any technique for creating images, diagrams, or animations to communicate a message. Visualization through visual imagery has been an effective way to communicate both abstract and concrete ideas since the dawn of man. Examples from history include cave paintings, Egyptian hieroglyphs, Greek geometry, and Leonardo da Vinci's revolutionary methods of technical drawing for engineering and scientific purposes.

One application of scientific modelling is the field of "Modelling and Simulation", generally referred to as "M&S". M&S has a spectrum of applications which range from concept development and analysis, through experimentation, measurement and verification, to disposal analysis. Projects and programs may use hundreds of different simulations, simulators and model analysis tools. 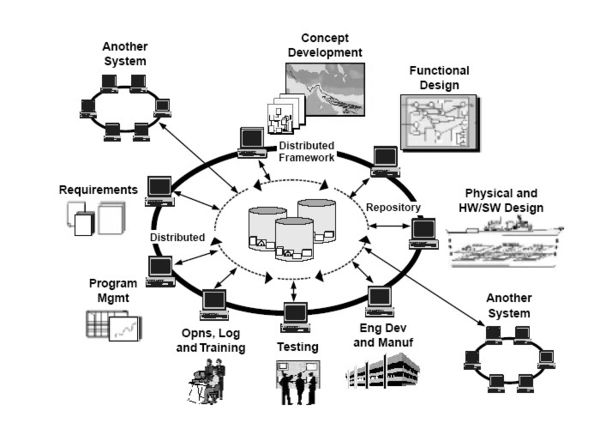 Example of the integrated use of Modelling and Simulation in Defence life cycle management. The modelling and simulation in this image is represented in the center of the image with the three containers.[10]

The figure shows how Modelling and Simulation is used as a central part of an integrated program in a Defence capability development process.[10]

Model Based Learning in Education 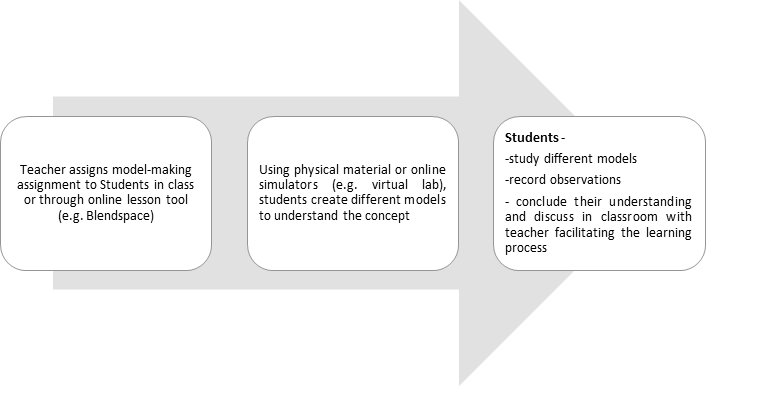 Model Based learning in education, particularly in relation to learning science involves students creating models for scientific concepts in order to [14] -

Different types of model based learning techniques include [14] -

Model making in education, is an iterative exercise with students refining, developing and evaluating their models over time. This shifts learning from the rigidity and monotony of traditional curriculum to an exercise of students' creativity and curiosity. This approach utilizes the constructive strategy of social collaboration and learning scaffold theory. Model based learning includes cognitive reasoning skills where existing models can be improved upon by construction of newer models using the old models as a basis.[15]

"A well-designed simulation simplifies a real world system while heightening awareness of the complexity of the system. Students can participate in the simplified system and learn how the real system operates without spending days, weeks or years it would take to undergo this experience in the real world." [17]

The teacher's role in the overall teaching and learning process is primarily that of a facilitator and arranger of the learning experience. He or she would assign the students, a model making activity for a particular concept and provide relevant information or support for the activity. For virtual model making activities, the teacher can also provide information on the usage of the digital tool and render troubleshooting support in case of glitches while using the same. The teacher can also arrange the group discussion activity between the students and provide the platform necessary for students to share their observations and knowledge extracted from the model making activity.

Model based learning evaluation could include the use of rubrics that assess the ingenuity and creativity of the student in the model construction and also the overall classroom participation of the student vis-a-vis the knowledge constructed through the activity.