From Infogalactic: the planetary knowledge core
(Redirected from Scientific skepticism)
Jump to: navigation, search
For a general discussion of skepticism, see skepticism.

The skeptical movement (also spelled sceptical) is a recent social movement and subculture that devotes itself to questioning whether claims are supported by empirical research and have reproducibility, as part of a methodological norm pursuing "the extension of certified knowledge".[1] For example, Robert K. Merton asserts that all ideas must be tested and are subject to rigorous, structured community scrutiny (see Mertonian norms).[2] Critics of the movement have often described it as being pseudoskeptical.

About the term and its scope

Scientific skepticism is also called rational skepticism, and it is sometimes referred to as skeptical inquiry.

Scientific skepticism is different from philosophical skepticism, which questions our ability to claim any knowledge about the nature of the world and how we perceive it. Methodological skepticism, a systematic process of being skeptical about (or doubting) the truth of one's beliefs, is similar but distinct. The New Skepticism, described by Paul Kurtz, a leading figure in the skeptical movement until his death in 2012, is scientific skepticism as espoused by the movement.[3]

Scientific skepticism has been defined as:

"A skeptic is one who prefers beliefs and conclusions that are reliable and valid to ones that are comforting or convenient, and therefore rigorously and openly applies the methods of science and reason to all empirical claims, especially their own. A skeptic provisionally proportions acceptance of any claim to valid logic and a fair and thorough assessment of available evidence, and studies the pitfalls of human reason and the mechanisms of deception so as to avoid being deceived by others or themselves. Skepticism values method over any particular conclusion."

"Skepticism is a provisional approach to claims. It is the application of reason to any and all ideas — no sacred cows allowed. In other words, skepticism is a method, not a position."

"Skepticism is a method of examining claims about the world. The skeptical 'toolbox' includes a reliance upon reason, critical thinking, and a desire for verifiable, testable evidence about particular claims (especially extraordinary ones). Usually, the 'skeptical way of thinking' is embodied in the scientific method."

The skeptical movement believes that empirical investigation of reality leads to the truth, and that the scientific method is best suited to this purpose.

The movement attempts to evaluate claims based on verifiability and falsifiability and discourage accepting claims on faith or anecdotal evidence. Self-described skeptics often focus their criticism on claims they consider to be implausible, dubious or clearly contradictory to mainstream science. The skeptical movement does not assert that unusual claims should be automatically rejected out of hand on a priori grounds - rather it argues that claims of paranormal or anomalous phenomena should be critically examined and that extraordinary claims would require extraordinary evidence in their favor before they could be accepted as having validity.

From a mainstream scientific point of view, theories are judged on many criteria, such as falsifiability, Occam's Razor, and explanatory power, as well as the degree to which their predictions match experimental results. Skepticism is part of the mainstream scientific method; for instance an experimental result is not regarded as established until it can be shown to be repeatable independently.[8] The skeptical movement traditionally is focused on 'what' people believe and not 'why' they believe, there might be psychological, cognitive or instinctive reasons for belief when there is little evidence.[9]

The skeptical movement conducts rather large-scale and openly admitted organized team editing of Wikipedia articles.[10] It is also the basis of its own wiki, RationalWiki.[11]

History of the skeptical movement

According to skeptic historian Daniel Loxton, "skepticism is a story without a beginning or an end", arguing that doubting and investigating extraordinary claims is as old as humanity itself.[12] Throughout history, there are examples of individuals practising critical inquiry and writing books or performing publicly against particular frauds and popular superstitions, including people like Lucian of Samosata (2nd century), Michel de Montaigne (16th century), Thomas Ady and Thomas Browne (17th century), Antoine Lavoisier and Benjamin Franklin (18th century), many different philosophers, scientists and magicians throughout the 19th and early 20th century up until and after Harry Houdini. However, skeptics banding together in societies that research the paranormal and fringe science is a modern phenomenon.[12]

Loxton mentions the Belgian Comité Para (1949) as the oldest "broad mandate" skeptical organisation.[12] Although it was preceded by the Dutch Vereniging tegen de Kwakzalverij (1881), which is therefore considered the oldest skeptical organisation by others,[13][14] the VtdK only focuses on fighting quackery, and thus has a 'narrow mandate'. The Comité Para was partly formed as a response to a predatory industry of bogus psychics who were exploiting the grieving relatives of people who had gone missing during the Second World War.[12] In contrast, Michael Shermer traces the origins of the modern scientific skeptical movement to Martin Gardner's 1952 book Fads and Fallacies in the Name of Science.[15] In 1968 the AFIS was founded in France.[16] 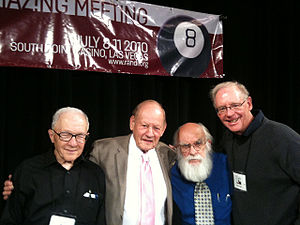 Although most skeptics in the English-speaking world see the 1976 formation of CSICOP in the United States as the "birth of modern skepticism",[17] founder Paul Kurtz actually modelled it after the Comité Para, including its name.[12] Kurtz' motive was being 'dismayed (...) by the rising tide of belief in the paranormal and the lack of adequate scientiﬁc examinations of these claims.'[18] Despite not being the oldest, CSICOP was 'the ﬁrst successful, broad-mandate North American skeptical organization of the contemporary period',[19] popularised the usage of the terms 'skeptic', 'skeptical' and 'skepticism' by its magazine, Skeptical Inquirer,[20] and directly inspired the foundation of many other skeptical organisations throughout the world, especially in Europe.[21] These included Australian Skeptics (1980), Vetenskap och Folkbildning (Sweden, 1982), New Zealand Skeptics (1986), GWUP (Austria, Germany and Switzerland, 1987), Skepsis r.y. (Finland, 1987), Stichting Skepsis (Netherlands, 1987), CICAP (Italy, 1989) and SKEPP (Dutch-speaking Belgium, 1990). Astronomers often stood at the cradle of skeptical organisations,[22] but also magicians like James Randi, who formed his own James Randi Educational Foundation (JREF) in 1996, were important in exposing charlatans, popularising their trickery. He invited anyone to demonstrate their claims were real with the One Million Dollar Paranormal Challenge. Other influential second-generation American organisations were The Skeptics Society (founded in 1992 by Michael Shermer), the New England Skeptical Society (originating in 1996) and the Independent Investigations Group (formed in 2000 by James Underdown).

After the Revolutions of 1989, Eastern Europe saw a surge in quackery and paranormal beliefs that were no longer restrained by the generally secular Communist regimes or obstructed import from Western Europe by the Iron Curtain (such as homeopathy), prompting the foundation of many new skeptical organisations to protect consumers.[23] These included the Czech Skeptics' Club Sisyfos (1995),[24] the Hungarian Skeptic Society (2006), the Polish Sceptics Club (2010)[25] and the Russian-speaking Skeptic Society (2013).[26] The European Skeptics Congress (ESC) has been held throughout Europe since 1989, from 1994 onwards co-ordinated by the European Council of Skeptical Organisations.[27] In the United States, The Amaz!ng Meeting (TAM) hosted by the JREF in Las Vegas has been the most important skeptical conference since 2003, with two spin-off conferences in London, UK (2009 and 2010) and one in Sydney, Australia (2010). Since 2010, the Merseyside Skeptics Society and Greater Manchester Skeptics jointly organise Question, Explore, Discover (QED) in Manchester, UK. Six World Skeptics Congresses have been held so far, namely in Buffalo, New York (1996), Heidelberg, Germany (1998), Sydney, Australia (2000), Burbank, California (2002), Abano Terme, Italy (2004) and Berlin, Germany (2012).[27][28]

Some of the topics that the skeptical movement questions and attacks include health claims surrounding certain foods, procedures, and alternative medicines; the plausibility and existence of supernatural abilities (e.g. tarot reading) or entities (e.g. poltergeists, angels, gods - including Zeus); the monsters of cryptozoology (e.g. the Loch Ness monster); as well as creationism/intelligent design, dowsing, conspiracy theories, and other claims the movement sees as unlikely to be true on scientific grounds.[29][30]

Members of the movement, such as James Randi have become famous for debunking claims related to some of these. Paranormal investigator Joe Nickell cautions, however, that "debunkers" must be careful to engage paranormal claims seriously and without bias. He explains that open minded investigation is more likely to teach and change minds than debunking.[31][32]

Richard Cameron Wilson, in an article in New Statesman, wrote that "the bogus sceptic is, in reality, a disguised dogmatist, made all the more dangerous for his success in appropriating the mantle of the unbiased and open-minded inquirer". Some advocates of intellectual positions discredited by the skeptical movement (such as AIDS denial, Holocaust revisionism/denial and Global warming skepticism/denialism) engage in pseudoskeptical behavior when they characterize themselves as skeptics. This is despite what the skeptical movement sees as their cherry picking of evidence that conforms to a pre-existing belief.[33] According to Wilson, who highlights the phenomenon in his book Don't Get Fooled Again (2008), the characteristic feature of false skepticism is that it "centres not on an impartial search for the truth, but on the defence of a preconceived ideological position".[34]

"There are some members of the skeptics' groups who clearly believe they know the right answer prior to inquiry. They appear not to be interested in weighing alternatives, investigating strange claims, or trying out psychic experiences or altered states for themselves (heaven forbid!), but only in promoting their own particular belief structure and cohesion ..."[35]

Commenting on the labels "dogmatic" and "pathological" that the "Association for Skeptical Investigation"[36] puts on critics of paranormal investigations, Robert Todd Carroll of the Skeptic's Dictionary[37] argues that that association "is a group of pseudo-skeptical paranormal investigators and supporters who do not appreciate criticism of paranormal studies by truly genuine skeptics and critical thinkers. The only skepticism this group promotes is skepticism of critics and [their] criticisms of paranormal studies."[38]

Skepticism is an approach to strange or unusual claims where doubt is preferred to belief, given a lack of conclusive evidence. The skeptical movement generally considers beliefs in the extraterrestrial hypothesis (ETH) and psychic powers as misguided, since no empirical evidence exists supporting such phenomena. The Ancient Greek philosopher Plato believed that to release others from ignorance despite their initial resistance is a great and noble thing.[39] Modern skeptical writers address this question in a variety of ways.

Bertrand Russell argued that individual actions are based upon the beliefs of the person acting, and if the beliefs are unsupported by evidence, then such beliefs can lead to destructive actions.[40] James Randi also often writes on the issue of fraud by psychics and faith healers.[41] Critics of alternative medicine often point to bad advice given by unqualified practitioners, leading to serious injury or death. Richard Dawkins points to religion as a source of violence (notably in The God Delusion), and considers creationism a threat to biology.[42][43] Some skeptics, such as the members of The Skeptics' Guide to the Universe podcast, oppose certain new religious movements because of their cult-like behaviours.[44]