From Infogalactic: the planetary knowledge core
Jump to: navigation, search
For assistance with IPA transcriptions of Scottish Gaelic for Wikipedia articles, see WP:IPA for Scottish Gaelic.
Error creating thumbnail: File with dimensions greater than 25 MP
Distribution of Gaelic speakers in 2011

This article is about the phonology of the Scottish Gaelic language. There is no standard variety of Scottish Gaelic; although statements below are about all or most dialects, the north-western dialects (Hebrides, Skye and the Northwest Highlands) are discussed more than others as they represent the majority of speakers.

Gaelic phonology is characterised by:

Due to the geographic concentration of Gaelic speakers along the western seaboard with its numerous islands, Gaelic dialectologists tend to ascribe each island its own dialect. On the mainland, no clear dialect boundaries have been established to date but the main areas are generally assumed to be Argyllshire, Perthshire, Moidart/Ardnamurchan, Wester Ross and Sutherland.

History of the discipline

Descriptions of the language have largely focused on the phonology. Welsh naturalist Edward Lhuyd published the earliest major work on Scottish Gaelic after collecting data in the Scottish Highlands between 1699 and 1700, in particular data on Argyll Gaelic and the now obsolete dialects of north-east Inverness-shire.[1]

Following a significant gap, the middle to the end of the twentieth century saw a great flurry of dialect studies in particular by Scandinavian scholars, again focussing largely on phonology:

In the period between 1950 to 1963, fieldwork was carried out to document all then remaining Gaelic dialects, culminating in the publication of the five-volume Survey of the Gaelic Dialects of Scotland by the Dublin Institute for Advanced Studies in 1997. The survey collected data from informants as far south as Arran, Cowal, Brig o' Turk, east to Blairgowrie, Braemar and Grantown-on-Spey, north-east to Dunbeath and Portskerra and all areas west of these areas, including St Kilda.

The following is a chart of the monophthong vowel phonemes appearing in Scottish Gaelic:[2]

All vowel phonemes except for [ɪ] and [ə] can be both long (represented with ⟨ː⟩) and short.

The orthography is as follows:

The language uses many vowel combinations. These can be categorised into two types depending on the status of one or more of the written vowels in the combinations.

In this category, vowels in digraphs/trigraphs that are next to a neighbouring consonant are for all intents and purposes part of the consonant, showing the broad or slender status of the consonant.

In this category, vowels are written together to represent either a diphthong, or what was in Middle Irish a diphthong.

Category 2 digraphs can by followed by Category 1 glides, and thereby form trigraphs:

Like the closely related languages, Modern Irish and Manx, Scottish Gaelic contains what are traditionally referred to as "broad" and "slender" consonants. Historically, Primitive Irish consonants preceding the front vowels /e/ and /i/ developed a [j]-like coarticulation similar to the palatalised consonants found in Russian[6][7] while the consonants preceding the non-front vowels /a/, /o/ and /u/ developed a velar coarticulation. While Irish distinguishes "broad" (i.e. phonetically velar or velarised consonants) and "slender" (i.e. phonetically palatal or palatalised consonants), in Scottish Gaelic velarisation is only present for /n̪ˠ l̪ˠ rˠ/. This means that consonants marked "broad" by the orthography are, for the most part simply unmarked, while "slender" consonants are palatal or palatalised. The main exception to this are the labials (/p pʰ m f v/), which have lost their palatalised forms. The only trace of their original palatalisation is a glide found before or after back vowels, e.g. beul /pial̪ˠ/ ('mouth') vs beò /pjɔː/ ('alive'). Celtic linguists traditionally transcribe slender consonants with an apostrophe (or more accurately, a prime) following the consonant (e.g. m′) and leave broad consonants unmarked.

The unaspirated stops in some dialects (east and south) are voiced (see below), as in Manx and Irish, while in all other areas full voicing is allophonic with regional variation, voicing occurs in certain environments, such as within breath groups and following homorganic nasals (see below). The variation suggests that the unaspirated stops at the underlying phonological level are voiced, with devoicing an allophonic variant that in some dialects has become the most common realisation. Irish dialects and Manx also have devoiced unaspirated consonants in certain environments.

In the modern languages, there is sometimes a stronger contrast from Old Gaelic in the assumed meaning of "broad" and "slender". In the modern languages, the phonetic difference between "broad" and "slender" consonants can be more complex than mere "velarisation"/"palatalisation". For instance, the Gaelic "slender s" is so palatalised that it has become postalveolar [ʃ].

Certain consonants (in particular the fricatives [h x ç ɣ ʝ v] and the lenis coronals [l n ɾ ɾʲ]) are rare in initial position except as a result of lenition.

Gaelic phonemes may have various allophones as well as dialectal or variations in pronunciation not shown in the chart above. The more common ones are: 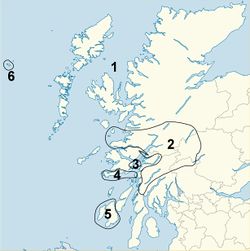 Velarised /l̪ˠ/ has 6 main realisations as shown on the map:[8]

The Survey of Scottish Gaelic Dialects occasionally reports labialised forms such as [l̪ˠw] or [l̪ˠv] outside the area they predominantly appear in, for example in Harris and Wester Ross. 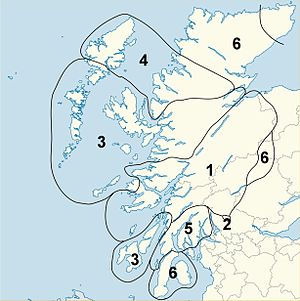 The approximate distribution of preaspiration in Gaelic dialects

Preaspiration varies in strength and can manifest as glottal ([ʰ] or [h]) or can vary depending on the place of articulation of the preaspirated consonant; being [ç] before "slender" segments and [x] before "broad" ones.[11] The occurrence of preaspiration follows a hierarchy of c > t > p; i.e. if a dialect has preaspiration with /pʰ/, it will also have it in the other places of articulation. Preaspiration manifests itself as follows:[8]

Lack of preaspiration coincides with full voicing of the unaspirated stops. Area 6 dialects in effect largely retain the Middle Irish stops, as has Manx and Irish.

In some Gaelic dialects (particularly the north-west), stops at the beginning of a stressed syllable become voiced when they follow nasal consonants of the definite article, for example: taigh ('a house') is [t̪ʰɤj] but an taigh ('the house') is [ən̪ˠ d̪ɤj]; cf. also tombaca ('tobacco') [t̪ʰomˈbaʰkə]. In such dialects, the lenis stops /p, t, tʲ, kʲ, k/ tend to be completely nasalised, thus doras ('a door') is [t̪ɔrəs], but an doras ('the door') is [ə n̪ˠɔrəs]. This is similar to eclipsis in Classical Gaelic and Irish, but not identical as it only occurs when a nasal is phonetically present whereas eclipsis in Classical Gaelic and Irish may occur in positions following a historic (but no longer present) nasal.

The voicing of voiceless aspirated stops and the nasalisation of the unaspirated (voiced) stops occurs after the preposition an/am ('in'), an/am ('their'), the interrogative particle an and a few other such particles and occasionally, after any word ending in a nasal e.g. a bheil thu a' faighinn cus? as ɡus rather than kʰus.

The lenited consonants have special pronunciations.

^† Lenition of initial l n r is not shown in writing. Word initially, these are always assumed to have the strong values (/(l̪ˠ) ʎ n̪ˠ ɲ rˠ/) unless they are in a leniting environment or unless they belong to a small and clearly defined group of particle (mostly the forms of the prepositions ri and le). Elsewhere, any of the realisations of l n r may occur.

The /s̪/ is not lenited when it appears before /m p t̪ k/. Lenition may be blocked when homorganic consonants (i.e. those made at the same place of articulation) clash with grammatical lenition rules. Some of these rules are active (particularly with dentals), others have become fossilised (i.e. velars and labials). For example, blocked lenition in the surname Caimbeul ('Campbell') (vs Camshron 'Cameron') is an incident of fossilised blocked lenition; blocked lenition in air an taigh salach "on the dirty house" (vs air a' bhalach mhath 'on the good boy') is an example of the productive lenition blocking rule.

Stress is usually on the first syllable: for example drochaid ('a bridge') [ˈt̪rɔxɪtʲ].

Occasionally, there are irregular occurrences of the epenthetic vowel, for example in Glaschu /kl̪ˠas̪əxu/ ('Glasgow').

Schwa [ə] at the end of a word is dropped when followed by a word beginning with a vowel. For example:

Of all the Celtic languages, lexical tones only exist in the dialects of Lewis[14] and Sutherland[15] in the extreme north of the Gaelic-speaking area. Phonetically and historically, these resemble the tones of Norway, Sweden and western Denmark; these languages have tonal contours typical for monosyllabic words and those for disyllabic words. In Lewis Gaelic, it is difficult to find minimal pairs. Among the rare examples are: bodh(a) [po.ə] ('underwater rock') vs. bò [poː] ('cow'), and fitheach [fi.əx] ('raven') vs. fiach [fiəx] ('debt'). Another example is the tonal difference between ainm [ɛnɛm] and anam [anam], the latter of which has the tonal contour appropriate to a disyllable. These tonal differences are not to be found in Ireland or elsewhere in the Scottish Gàidhealtachd.[16]