From Infogalactic: the planetary knowledge core
Jump to: navigation, search
Not to be confused with other organizations named Scripps.

Scripps College, founded in 1926, is a liberal arts women's college in Claremont, California, United States with an annual enrollment of approximately 950 students. It is one of the Claremont Colleges.

Scripps College was founded in 1926 by Ellen Browning Scripps, a philanthropist and prominent figure in the worlds of education, publishing, and women’s rights. According to Scripps, "the paramount obligation of a college is to develop in its students the ability to think clearly and independently, and the ability to live confidently, courageously, and hopefully."[4]

At the age of 89, Scripps founded the College as one of the institutions in the West dedicated to educating women for both professional careers and personal growth. Scripps’ “experiment in education” called for a setting with an artistic connection between buildings and garden landscape on an intimate scale.[citation needed]

File:Scripps campus.jpg
A view of the tree-filled Balch Hall courtyard at Scripps College

Scripps College is frequently described as one of America’s most beautiful college campuses and is listed in the National Register of Historic Places.[6][7] In its 2015 edition of The Best 379 Colleges, the Princeton Review cited the campus as the fifth most beautiful in the United States, and has been corroborated by Forbes,[8] U.S. News & World Report, The Huffington Post, and others.[9][10]

Scripps is located in the center of the Claremont Colleges, surrounded by Harvey Mudd College to the north, Pitzer College to the east, Claremont McKenna College and Pomona College to the south, and Claremont Graduate University to the west. The original campus was designed by Gordon Kaufmann in the Spanish Colonial Revival Style architecture. In general, his 1926 campus plan has been carefully preserved, with major vistas linking the central areas. The overall planting schemes and landscaping devised by Edward Huntsman-Trout [11] are still followed.

The campus also offers a number of interactive landscaping elements, including a rose garden to the north designated for community cutting and fruit trees available for picking. Oranges, grapefruits, pomegranates, kumquats, and loquats are available to students. Scripps also harvests olives from its olive trees and presses it into award-winning olive oil.[12]

Central to the Scripps campus community is The Motley Coffeehouse (commonly called "The Motley"), a student-run coffee shop located in Seal Court. The Motley is a socially- and environmentally-conscious business, event space, study space, social space, and coffeehouse.[citation needed] According to The Motley, it is the only all-women, undergraduate, student-run coffeehouse "west of the Mississippi.”[13]

Several facilities are shared by the members of the Claremont Consortium including Honnold/Mudd Library, the Keck Science Center, and the Robert J. Bernard Field Station.

Temperatures in Claremont average 63 degrees Fahrenheit, with an average high of 77 and low of 50. Scripps sees sun approximately 280 days out of the year.[citation needed]

Scripps College is also the home of the Ruth Chandler Williamson Gallery,[14] which maintains Scripps College's permanent art collection of some 7,500 objects spanning 3,000 years of art history.[15] Objects are available for use in classes, displayed in campus exhibitions, and loaned to other exhibiting institutions. Among the holdings in the collection are works by American artists Andy Warhol, Winslow Homer, Childe Hassam, and John James Audubon, and an extensive collection of paintings by the California artist and Scripps Professor Emeritus Millard Sheets. 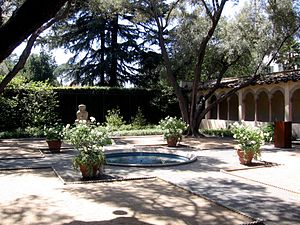 A view of the central pool, northern arcade and sculpture in the Margaret Fowler Garden at Scripps College.

Originally designed as a European medieval-style cloister garden to be located east of a proposed (but never built) chapel, the Margaret Fowler Garden is a walled garden located on the Scripps College Campus. The garden is laid out in two distinct sections: the western area contains a sculpture by Albert Stewart called "Eternal Primitive". The western area of the garden also contains a central pool and four walkways extending in the cardinal directions. The eastern end has a Mediterranean style tiled wall fountain and open flagstone area. Arcades run along the north and south sides of the garden.

On the south wall of the Margaret Fowler Garden are murals by Alfredo Ramos Martínez. The College commissioned Martinez in 1945 to paint a mural (entitled "The Flower Vendors" by Martínez) on the south wall of the Fowler garden. Martínez sketched in the entire composition on the plaster wall and began working on several panels before dying unexpectedly on November 8, 1946 at the age of 72, leaving the mural unfinished. In 1994, a grant from the Getty Endowment allowed the mural to be conserved.[16]

Scripps College has several sustainability initiatives underway, from energy conservation to green building practices. On the conservation front, the college has seen monetary and energy savings through use of a new energy management system, and has designed water systems to cut down on waste. Turning "Alumnae Field" into a natural surface also helped in efforts to conserve water. Scripps has also downsized trash bins and made "to-go" containers recyclable, in order to divert more waste from landfills. On the emissions reductions front, maintenance staff use electric blowers and carts (as opposed to gas powered equipment), while a ride-sharing program is available for students, faculty and staff.[17]

For its practices regarding sustainability, Scripps earned a B- on the College Sustainability Report Card 2011, published by the Sustainable Endowments Institute. This grade reflects a quantitative analysis of the effectiveness of the institution's policies. The college received positive recognition for student involvement, on-campus transportation, its food and recycling programs, water programs, and LEED buildings, but fared poorly on the shareholder involvement evaluation category of the report.[18]

Scripps is a member of the Claremont Colleges, and much of student life revolves around the five colleges, or "5Cs." Scripps College, Claremont McKenna College, Pomona College, Pitzer College, and Harvey Mudd College not only interact socially, but also share dining halls, libraries, and other facilities spread throughout the bordering campuses. All five colleges, along with Claremont Graduate University and Keck Graduate Institute of Applied Life Sciences, are part of the Claremont University Consortium.

Scripps students can cross-register for classes at or enroll in the majors of any of the undergraduate schools at the Claremont Colleges. Top majors for 2013-14 include art, biology, economics, English, French studies, math, politics, and psychology. Classes average 16 students, with an overall student-to-teacher ratio of 10:1. More than 21% choose to double or dual major by the time they graduate. All courses are taught by faculty.

The 2015 annual ranking by U.S. News & World Report categorizes Scripps as 'most selective' and rates it the overall No. 24 liberal arts college in the nation, and the 3rd best women's college, after Wellesley College and Smith College.[22] Forbes in 2014 rated it 69th in its America's Top Colleges ranking of 650 schools, which includes military academies, national universities, and liberal arts colleges.[23] Kiplinger's Personal Finance places Scripps at 27th in its 2014 ranking of best value liberal arts colleges in the United States.[24]

A key part of the Scripps experience is the Core Curriculum, a sequence of three classes that encourage students to think critically and challenge ideas. Every first-year student takes Core I in the fall, which introduces students to major ideas that shape the modern world. Core II seminars focus on specific ideas introduced in Core I and are team-taught by two professors in different fields, such as physics and art. The concluding Core III classes encourage discussion and critical thinking for first-semester sophomores, culminating in individual projects.

Scripps College also maintains a robust study abroad program called Off-Campus Study. The program, which more than 60% of students take advantage of, offers access to more than 120 approved programs in 86 cities in 47 countries (including domestic exchanges with Spelman College and George Washington University and internships in Silicon Valley and Washington, DC).

Scripps is a residential campus, with nine halls and on-campus apartments providing living arrangements for all four years of undergraduate study. In 2006, The Princeton Review included Scripps in several of their rankings, such as "Dorms Like Palaces" (#4), "Most Beautiful Campus" (#17), and "Best Campus Food" (#19).[29]

All residence halls are mixed-class halls; first-year students, sophomores, juniors, and seniors live in one shared community. The number of residents in each hall ranges from 70 to 120, and each is governed by a Hall Council made up of five officers elected by the residents of that hall.

As of October 2014, an anonymous donor gifted Scripps College with $10 million to support the construction of a 10th residence hall currently named NEW Hall.[30]