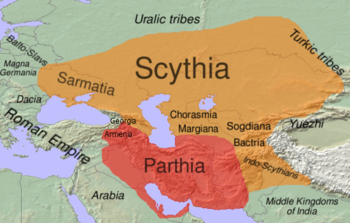 Approximate extent of Scythia within the area of distribution of Eastern Iranian languages (shown in orange) in the 1st century BC.[citation needed]

Scythia (/ˈsɪθiə/; Ancient Greek: Σκυθική) was a region of Central Eurasia in classical antiquity, occupied by the Eastern Iranian Scythians,[1][2][3] encompassing parts of Eastern Europe east of the Vistula River and Central Asia, with the eastern edges of the region vaguely defined by the Greeks.[citation needed] The Ancient Greeks gave the name Scythia (or Great Scythia) to all the lands north-east of Europe and the northern coast of the Black Sea.[4]

The Scythians – the Greeks' name for this initially nomadic people – inhabited Scythia from at least the 11th century BC to the 2nd century AD.[5] Its location and extent varied over time but usually extended farther to the west than is indicated on the map opposite.[6]

Scythia was a loose state that originated as early as 8th century BC. Little is known of them and their rulers. The most detailed western description is by Herodotus, though it is uncertain he ever went to Scythia. He says the Scythians' own name for themselves was "Scoloti".[7] The Scythians became increasingly settled and wealthy on their western frontier with Greco-Roman civilization.

The region known to classical authors as Scythia included:

In the 7th century BC Scythians penetrated from the territories north of the Black Sea across the Caucasus. The early Scythian kingdoms were dominated by inter-ethnic forms of dependency based on subjugation of agricultural populations in eastern South Caucasia, plunder and taxes (occasionally, as far as Syria), regular tribute (Media), tribute disguised as gifts (Egypt), and possibly also payments for military support (Assyria).[citation needed]

It is possible that the same dynasty ruled in Scythia during most of its history. The name of Koloksai, a legendary founder of a royal dynasty, is mentioned by Alcman in the 7th century BC. Prototi and Madis, Scythian kings in the Near Eastern period of their history, and their successors in the north Pontic steppes belonged to the same dynasty. Herodotus lists five generations of a royal clan that probably reigned at the end of the 7th to 6th centuries BC: prince Anacharsis, Saulius, Idanthyrsus, Gnurus (ru), Lycus, and Spargapithes.[10]

After being defeated by the Chinese and driven from the Near East, in the first half of the 6th century BC, Scythians had to re-conquer lands north of the Black Sea. In the second half of that century, Scythians succeeded in dominating the agricultural tribes of the forest-steppe and placed them under tribute. As a result their state was reconstructed with the appearance of the Second Scythian Kingdom which reached its zenith in the 4th century BC. (see further: History of Xinjiang)

Scythia's social development at the end of the 5th century BC and in the 4th century BC was linked to its privileged status of trade with Greeks, its efforts to control this trade, and the consequences partly stemming from these two. Aggressive external policy intensified exploitation of dependent populations and progressed the stratification among the nomadic rulers. Trading with Greeks also stimulated sedentarization processes.

The proximity of the Greek city-states on the Black Sea coast (Pontic Olbia, Cimmerian Bosporus, Chersonesos, Sindica, Tanais) was a powerful incentive for slavery in the Scythian society, but only in one direction: the sale of slaves to Greeks, instead of use in their economy. Accordingly, the trade became a stimulus for capture of slaves as war spoils in numerous wars.

Scythia at the end of the 5th to 3rd centuries BC 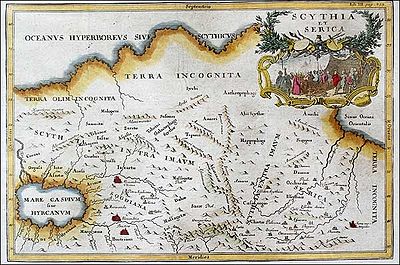 The Scythian state reached its greatest extent in the 4th century BC during the reign of Ateas. Isocrates[11] believed that Scythians, and also Thracians and Persians, are "the most able to power, and are the peoples with the greatest might." In the 4th century BC, under king Ateas, the tribune structure of the state was eliminated, and the ruling power became more centralized. The later sources do not mention three basileuses any more. Strabo tells[12] that Ateas ruled over the majority of the North Pontic barbarians.

Written sources tell that expansion of the Scythian state before the 4th century BC was mainly to the west. In this respect Ateas continued the policy of his predecessors in the 5th century BC. During western expansion, Ateas fought the Triballi.[13] An area of Thrace was subjugated and levied with severe duties. During the 90 year life of Ateas, the Scythians settled firmly in Thrace and became an important factor in political games in the Balkans. At the same time, both the nomadic and agricultural Scythian populations increased along the Dniester river. A war with the Bosporian Kingdom increased Scythian pressure on the Greek cities along the North Pontic littoral.

Materials from the site near Kamianka-Dniprovska, purportedly the capital of the Ateas’ state, show that metallurgists were free members of the society, even if burdened with imposed obligations. Metallurgy was the most advanced and the only distinct craft speciality among the Scythians. From the story of Polyaenus and Frontin, it follows that in the 4th century BC Scythia had a layer of dependent population, which consisted of impoverished Scythian nomads and local indigenous agricultural tribes, socially deprived, dependent and exploited, who did not participate in the wars, but were engaged in servile agriculture and cattle husbandry.

The year 339 BC was a culminating year for the Second Scythian Kingdom, and the beginning of its decline. The war with Philip II of Macedon ended in a victory by the father of Alexander the Great, the Scythian king Ateas fell in battle well into his nineties.[14] Many royal kurgans (Chertomlyk, Kul-Oba, Aleksandropol, Krasnokut) are dated from after Ateas’s time and previous traditions were continued, and life in the settlements of Western Scythia show that the state survived until the 250s BC. When in 331 BC Zopyrion, Alexander's viceroy in Thrace, "not wishing to sit idle", invaded Scythia and besieged Pontic Olbia, he suffered a crushing defeat from the Scythians and lost his life.[15]

The fall of the Second Scythian Kingdom came about in the second half of the 3rd century BC under the onslaught of Celts and Thracians from the west and Sarmatians from the east. With their increased forces, the Sarmatians devastated significant parts of Scythia and, "annihilating the defeated, transformed a larger part of the country into a desert".[16]

The dependent forest-steppe tribes, subjected to exaction burdens, freed themselves at the first opportunity. The Dnieper and Buh populace ruled by the Scythians did not become Scythians. They continued to live their original life, which was alien to Scythian ways. From the 3rd century BC for many centuries the histories of the steppe and forest-steppe zones of North Pontic diverged. The material culture of the populations quickly lost their common features. And in the steppe, reflecting the end of nomad hegemony in Scythian society, the royal kurgans were no longer built. Archeologically, late Scythia appears first of all as a conglomerate of fortified and non-fortified settlements with abutting agricultural zones.

The development of the Scythian society was marked by the following trends:

Scythia's later history is mainly dominated by sedentary agrarian and city elements. As a result of the defeats suffered by Scythians two separate states were formed, two Lesser Scythias, one in Thrace (Dobrudja), and the other in the Crimea and the Lower Dnieper area.[17]

Having settled this Scythia Minor in Thrace, the former Scythian nomads (or rather their nobility) abandoned their nomadic way of life, retaining their power over the agrarian population. This little polity should be distinguished from the Third Scythian Kingdom in Crimea and Lower Dnieper area, whose inhabitants likewise underwent a massive sedentarization. The interethnic dependence was replaced by developing forms of dependence within the society.

The enmity of the Third Scythian Kingdom, centred on Scythian Neapolis, towards the Greek settlements of the northern Black Sea steadily increased. The Scythian king apparently regarded the Greek colonies as unnecessary intermediaries in the wheat trade with mainland Greece. Besides, the settling cattlemen were attracted by the Greek agricultural belt in Southern Crimea. The later Scythia was both culturally and socio-economically far less advanced than its Greek neighbors such as Olvia or Chersonesos.

The continuity of the royal line is less clear in the Lesser Scythias of Crimea and Thrace than it had been previously. In the 2nd century BC, Olvia became a Scythian dependency. That event was marked in the city by minting of coins bearing the name of the Scythian king Skilurus. He was a son of a king and a father of a king, but the relation of his dynasty with the former dynasty is not known. Either Skilurus or his son and successor Palakus were buried in the mausoleum of Scythian Neapol that was used from c. 100 BC to c. 100 AD. However, the last burials are so poor that they do not seem to be royal, indicating a change in the dynasty or royal burials in another place.

Many different groupings of Scythian tribes include the following: