Sea anemones are a group of water-dwelling, predatory animals of the order Actiniaria. They are named for the anemone, a terrestrial flower. Sea anemones are classified in the phylum Cnidaria, class Anthozoa, subclass Hexacorallia.[1] Anthozoa often have large polyps that allow for digestion of larger prey and also lack a medusa stage.[2] As cnidarians, sea anemones are related to corals, jellyfish, tube-dwelling anemones, and Hydra.

Many sea anemones form symbiotic relationships with single-celled dinoflagellates, whether zooxanthellae or zoochlorellae, that live within their cells.

The global trade in marine ornamentals for aquariums is rapidly expanding, and threatens sea anemone populations as the trade depends on collection from the wild, and the animals grow and reproduce relatively slowly.[citation needed] 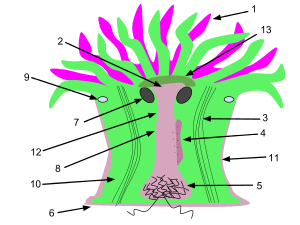 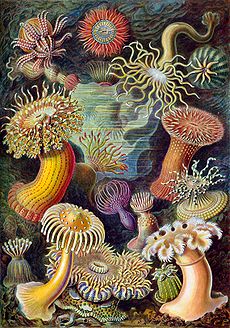 A few species are pelagic and are not attached to the bottom; instead, they have a gas chamber within the pedal disc, allowing them to float upside down in the water.[4]

The mouth, also the anus of the sea anemone, is in the middle of the oral disc surrounded by tentacles armed with many cnidocytes, cells that are both defensive and used to capture prey. Cnidocytes contain stinging nematocysts, capsule-like organelles capable of everting suddenly, giving the phylum Cnidaria its name.[5] Each nematocyst contains a small venom vesicle filled with actinotoxins, an inner filament, and an external sensory hair. A touch to the hair mechanically triggers a cell explosion, which launches a harpoon-like structure that attaches to the organism that triggered it, and injects a dose of venom in the flesh of the aggressor or prey. This gives the anemone its characteristic sticky feeling. The sea anemone eats small fish and shrimp.

The venom is a mix of toxins, including neurotoxins, that paralyzes the prey so the anemone can move it to the mouth for digestion inside the gastrovascular cavity. Actinotoxins are highly toxic to prey species of fish and crustaceans. However, Amphiprioninae (clownfish), small banded fish in various colors, are not affected by their host anemone's sting and shelter themselves from predators among its tentacles.[6] Several other species have similar adaptions and are also unaffected (see Symbiotic relationships). Most sea anemones are harmless to humans, but a few highly toxic species (notably Actinodendron, Phyllodiscus and Stichodactyla) have caused severe injuries and are potentially lethal.[7]

A gastrovascular cavity functions as a stomach and possesses a single opening to the outside, which operates as both a mouth and anus. Waste and undigested matter is excreted through this opening, which can be described as an incomplete gut. The mouth is typically slit-like in shape, and bears a groove at one or both ends. The groove, termed a siphonophore, is ciliated, and helps to circulate water through the gastrovascular cavity.[4] Some anemones feed on small particles, which are caught with the aid of a mucus secretion and moving currents that are set up by the tentacles. Most sea anemones are predacious, immobilizing their prey with the aid of their nematocysts.[8]

The mouth opens into a flattened pharynx. This consists of an in-folding of the body wall, and is therefore lined by the animal's epidermis. The pharynx typically runs for about two-thirds the length of the body before opening into the gastrovascular cavity that fills the remainder of the body.

The gastrovascular cavity itself is divided into a number of chambers by mesenteries radiating inwards from the body wall. Some of the mesenteries form complete partitions with a free edge at the base of the pharynx, where they connect, but others reach only partway across. The mesenteries are usually found in multiples of twelve, and are symmetrically arranged around the central pharynx. They have stomach lining on both sides, separated by a thin layer of mesoglea, and includes filaments of tissue specialised for secreting digestive enzymes. In some species, these filaments extend below the lower margin of the mesentery, hanging free in the gastrovascular cavity as acontial filaments.[4] 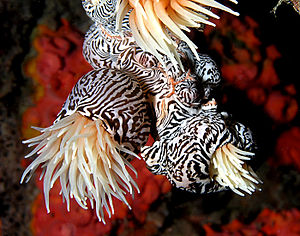 A primitive nervous system, without centralization, coordinates the processes involved in maintaining homeostasis, as well as biochemical and physical responses to various stimuli. No specialized sense organs are present.

The muscles and nerves are much simpler than those of most other animals, although more specialised than in other cnidarians, such as corals. Cells in the outer layer (epidermis) and the inner layer (gastrodermis) have microfilaments that group into contractile fibers. These fibers are not true muscles because they are not freely suspended in the body cavity as they are in more developed animals. Longitudinal fibres are found in the tentacles and oral disc, and also within the mesenteries, where they can contract the whole length of the body. Circular fibers are found in the body wall and, in some species, around the oral disc, allowing the animal to retract its tentacles into a protective sphincter.[4]

Since the anemone lacks a skeleton, the contractile cells pull against the gastrovascular cavity, which acts as a hydrostatic skeleton. The anemone stabilizes itself by shutting its mouth, which keeps the gastrovascular cavity at a constant volume, making it more rigid. Although generally sessile, sea anemones are capable of slow movements using their pedal disc, or of swimming, using either their tentacles or by flexing their bodies. 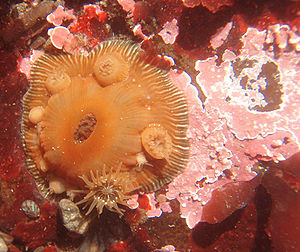 Unlike other cnidarians, anemones (and other anthozoans) entirely lack the free-swimming medusal stage of their lifecycle; the polyp produces eggs and sperm, and the fertilized egg develops into a planula that develops directly into another polyp.

Anemones tend to stay in the same spot until conditions become unsuitable (prolonged dryness, for example), or a predator attacks them. In that case, anemones can release themselves from the substrate and use flexing motions to swim to a new location. Most sea anemones attach temporarily to submerged objects; a few thrust themselves into the sand or live in burrows; a few are parasitic on other marine organisms,[8] and some have symbiotic relationships with hermit crabs.

The sexes in sea anemones are separate in some species, while other species are protandric hermaphrodites. The brooding anemone (Epiactis prolifera) is gynodioecious, starting life as a female and later becoming hermaphroditic, so that populations consist of females and hermpaphrodites, and all females are fertilized by hermaphrodites. The gonads are strips of tissue within the mesenteries. Both sexual and asexual reproduction can occur. In sexual reproduction, males release sperm to stimulate females to release eggs, and fertilization occurs. Anemones eject eggs and sperm through the mouth. The fertilized egg develops into a planula, which settles and grows into a single polyp.

Anemones can also reproduce asexually, by budding or in some cases by binary fission, when the polyp separates into two halves. Some species can also reproduce by pedal laceration. In this process, a ring of material breaks off from the pedal disc at the base of the column which then fragments, the pieces regenerating into new individuals.[9] The sea anemone Aiptasia diaphana displays sexual plasticity. Thus asexually produced clones derived form a single founder individual can contain both male and female individuals (ramets).[10] When eggs and sperm (gametes) are formed, they can produce zygotes derived from “selfing” (within the founding clone) or out-crossing, that then develop into swimming planula larvae. 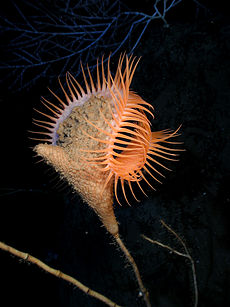 Venus flytrap sea anemone (Actinoscyphia) in the Gulf of Mexico

The sea anemone has an oral disk, which the organism uses to capture prey. The anemone attaches to the substrate using the basal disk at its posterior end. Others also burrow into weaker objects. Some species attach to kelp while others are free-swimming.

Although not plants and therefore incapable of photosynthesis themselves, many sea anemones form an important facultative symbiotic relationship with certain single-celled algae species that reside in the animals' gastrodermal cells. These algae may be either zooxanthellae, zoochlorellae or both. The sea anemone benefits from the products of the algae's photosynthesis, namely oxygen and food in the form of glycerol, glucose and alanine; the algae in turn are assured a reliable exposure to sunlight and protection from micro-feeders, which the sea anemones actively maintain. The algae also benefit by being protected by the sea anemone's stinging cells, nematocysts, reducing the likelihood of being eaten by herbivores.

Several species of fish and invertebrates live in symbiotic or commensal relationships with sea anemones, most famously the clownfish, but also certain cardinalfish (such as Banggai cardinalfish), juvenile threespot dascyllus,[11] Bucchich's (or anemone) goby,[12] juvenile painted greenling,[13] various crabs (such as Inachus phalangium, Mithraculus cinctimanus and Neopetrolisthes), shrimp (such as certain Alpheus, Lebbeus, Periclimenes and Thor),[14] opossum shrimp (such as Heteromysis and Leptomysis),[15] and various marine snails.[16][17][18]

Two of the more unusual relationships are those between certain anemones (such as Adamsia, Calliactis and Neoaiptasia) and hermit crabs or snails, and Bundeopsis or Triactis anemones and Lybia boxing crabs. In the former, the anemones live on the shell of the hermit crab or snail.[14][16][17][18] In the latter, the small anemones are carried in the claws of the boxing crab.[14][19]

Most species inhabit tropical reefs, although there are species adapted to relatively cold waters, intertidal reefs, and sand/kelp environments. 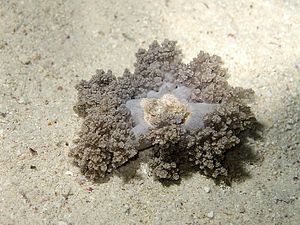 The global trade of marine ornamentals has been a rapidly expanding industry involving numerous countries worldwide. In the early 1980s, the estimated value of imported marine fish and invertebrates was US$24–40 million annually.[20] Current estimates place that value at US$200–330 million,[21] with the United States accounting for 80% of the industry imports.[22] Despite advances and the expansion of aquaculture, postlarval capture and rearing, the majority of marine ornamentals are collected in the wild as adults or juveniles.[23]

Anemones are susceptible to overexploitation due to their long lifespans, slower relative growth rates, and lower reproductive rates than their resident fish, which are also affected because they settle exclusively and are restricted to specific host sea anemones. The demand for these organisms is reflected in fishermen's catch records, which document the value they are paid per catch, and on average sea anemones were valued at five times the average value of anemonefish, and 10 times the value of the most abundant anemonefish, and in fact only made up 4.1% of the total value of the catch.

Aquarium fishing activities significantly impact the populations of anemones and anemonefish by drastically reducing the densities of each in exploited areas,[23] and could also negatively impact anemone shrimp, and any organisms obligately associated with sea anemones. Anemonefish can survive alone in captivity, as has been shown by multiple research efforts.[24][25]

In southern Italy and southwestern Spain, the anemone Anemonia sulcata is consumed as a delicacy.[26] The whole animal is marinated in vinegar, then coated in a tempura-like batter and deep-fried in olive oil. They are similar in appearance and texture to croquettes, but have an intense seafood taste.

Most Actiniaria do not form hard parts that can be recognized as fossils, but a few do exist; Mackenzia, from the Middle Cambrian Burgess Shale of Canada, is the oldest fossil identified as a sea anemone.

Rodriguez et al. proposed a new classification for the Actiniaria based on extensive DNA results.[27]

Suborders and Superfamilies included in Actiniaria are:

The relationships of higher-level taxa in Carlgren’s[28] classification are re-interpreted as follows: