Crinoids are marine animals that make up the class Crinoidea of the echinoderms (phylum Echinodermata). Crinoidea comes from the Greek word krinon, "a lily", and eidos, "form".[2][3] They live both in shallow water and in depths as great as 6,000 metres (20,000 ft).[citation needed] Sea lilies refer to the crinoids which, in their adult form, are attached to the sea bottom by a stalk.[4] Feather stars[5] or comatulids[6] refer to the unstalked forms.

Crinoids are characterised by a mouth on the top surface that is surrounded by feeding arms. They have a U-shaped gut, and their anus is located next to the mouth. Although the basic echinoderm pattern of fivefold symmetry can be recognised, most crinoids have many more than five arms. Crinoids usually have a stem used to attach themselves to a substrate, but many live attached only as juveniles and become free-swimming as adults.

There are only about 600 extant crinoid species,[7] but they were much more abundant and diverse in the past. Some thick limestone beds dating to the mid- to late-Paleozoic are almost entirely made up of disarticulated crinoid fragments. 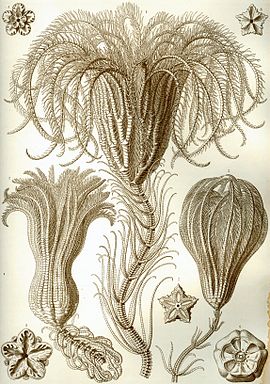 Crinoids comprise three basic sections; the stem, the calyx, and the arms. The stem is composed of highly porous ossicles which are connected by ligamentary tissue. The calyx contains the crinoid's digestive and reproductive organs, and the mouth is located at the top of the dorsal cup, while the anus is located peripheral to it. The arms display pentamerism or pentaradial symmetry and comprise smaller ossicles than the stem and are equipped with cilia which facilitate feeding by moving the organic media down the arm and into the mouth.

The majority of living crinoids are free-swimming and have only a vestigial stalk. In those deep-sea species that still retain a stalk, it may reach up to 1 metre (3.3 ft) in length, although it is usually much smaller. The stalk grows out of the aboral surface, which forms the upper side of the animal in starfish and sea urchins, so that crinoids are effectively upside-down by comparison with most other echinoderms. The base of the stalk consists of a disc-like sucker, which, in some species, has root-like structures that further increase its grip on the underlying surface. The stalk is often lined by small cirri.[8]

Like other echinoderms, crinoids have pentaradial symmetry. The aboral surface of the body is studded with plates of calcium carbonate, forming an endoskeleton similar to that in starfish and sea urchins. These make the calyx somewhat cup-shaped, and there are few, if any, ossicles in the oral (upper) surface. The upper surface, or tegmen, is divided into five ambulacral areas, including a deep groove from which the tube feet project, and five interambulacral areas between them. The anus, unusually for echinoderms, is found on the same surface as the mouth, at the edge of the tegmen.[8]

The ambulacral grooves extend onto the arms, which thus have tube feet along their inner surfaces. Primitively, crinoids had only five arms, but in most living species these are divided into two, giving ten arms in total. In most living species, especially the free-swimming feather stars, the arms branch several times, producing up to two hundred branches in total. The arms are jointed, and lined by smaller feather-like appendages, or pinnules, which also include tube feet.[8] 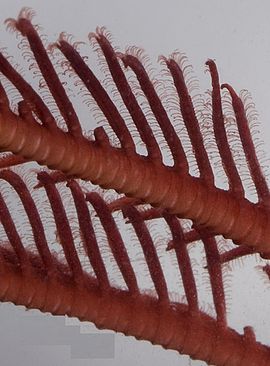 Close-up on the pinnules : we can see the rows of translucent podia.

Crinoids feed by filtering small particles of food from the sea water with their feather like arms. The tube feet are covered with a sticky mucus that traps any food that floats past. Once they have caught a particle of food, the tube feet can flick it into the ambulacral groove, where the cilia are able to propel the stream of mucus towards the mouth. Generally speaking, crinoids living in environments with relatively little plankton have longer and more highly branched arms than those living in rich environments.[8]

The mouth descends into a short oesophagus. There is no true stomach, so the oesophagus connects directly to the intestine, which runs in a single loop right around the inside of the calyx. The intestine often includes numerous diverticulae, some of which may be long or branched. The end of the intestine opens into a short muscular rectum. This ascends towards the anus, which projects from a small conical protuberance at the edge of the tegmen.[8]

Specimens of the sea urchin Calocidaris micans present in a meadow of the crinoid Endoxocrinus parrae, have been shown to contain large quantities of stem portions (or columnals) in the direct vicinity of living crinoids, some of which were upended. The gut content of the sea urchins consisted of articulated ossicles with soft tissue, whereas the local sediment contained only disarticulated ossicles without soft tissue. This makes it highly likely that these sea urchins are predators of the crinoids, and that the crinoids flee, offering part of their stem in the process.[9]

Various crinoid fossils hint at possible prehistoric predators. Coprolites of both fish and cephalopods have been found containing ossicles of various crinoids, such as the pelagic crinoid Saccocoma, from the Jurassic lagerstatten Solnhofen,[10] while damaged crinoid stems with bite marks matching the toothplates of coccosteid placoderms have been found in Late Devonian Poland.[11] The calyxes of several Devonian to Carboniferous-aged crinoids have the shells of a snail, Platyceras, intimately associated with them.[12] Some have the snail situated over the anus, suggesting that Platyceras was a coprophagous commensal, while others have the animal directly situated over a borehole, suggesting a more pernicious relationship.[13]

Like other echinoderms, crinoids possess a water vascular system that maintains hydraulic pressure in the tube feet. This is not connected to external sea water, as in other echinoderms, but only to the body cavity. The body cavity is itself somewhat restricted, being largely replaced by connective tissue, although it is present as narrow canals within the arms and stalk.[8]

Crinoids also possess a separate haemal system, consisting of fluid-filled sinuses within the connective tissue. There is a large plexus of sinuses around the oesophagus, with branches extending down to a mass of glandular tissue at the base of the calyx.[8]

These various fluid-filled spaces, in addition to transporting nutrients around the body, also function as both a respiratory and an excretory system. Oxygen is absorbed primarily through the tube feet, which are the most thin-walled parts of the body, while waste is collected by phagocytic coelomocytes.[8]

The crinoid nervous system is divided into three parts, with numerous connections between them. The uppermost portion is the only one homologous with the nervous systems of other echinoderms. It consists of a central nerve ring surrounding the mouth, and radial nerves branching into the arms. Below this lies a second nerve ring, giving off two brachial nerves into each arm. Both of these sets of nerves are sensory in nature, with the lower set supplying the pinnules and tube feet.[8] The third portion of the nervous system lies below the other two, and is responsible for motor action. This is centred on a mass of neural tissue near the base of the calyx, and provides a single nerve to each arm and a number of nerves to the stalk.[8]

Crinoids are dioecious, with separate male and female individuals. They have no true gonads, producing their gametes from genital canals found inside some of the pinnules. The pinnules eventually rupture to release the sperm and eggs into the surrounding sea water.[8] The fertilised eggs hatch to release a free-swimming vitellaria larva. The larva is barrel-shaped with rings of cilia running round the body, and a tuft of sensory hairs at the upper pole. In some cases females have been known to temporarily brood the larvae using chambers within the arms. While both feeding and non-feeding larvae exist among the four other extant echinoderm classes, all present day crinoids appears to be descendants from a surviving clade that went through a bottleneck after the Permian extinction, which had lost its feeding larval stage.[14] The larva's free-swimming period lasts only for a few days before settling to the bottom and attaching itself to the underlying surface using an adhesive gland on its ventral surface. The larva then metamorphoses into a stalked juvenile. Even the free-swimming feather stars sometimes go through this stage, with the adult eventually breaking away from the stalk.[8] Within 10 to 16 months the crinoid will be able to reproduce.[citation needed] 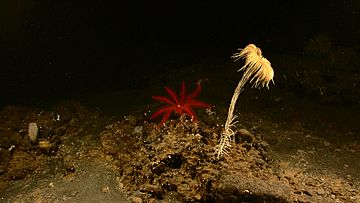 A stalked crinoid (white) and a comatulid (red) in deep sea, showing the differences between these two sister groups.

Most modern crinoids, i.e., the feather stars, are free-swimming and lack a stem as adults. Examples of fossil crinoids that have been interpreted as free-swimming include Marsupitsa, Saccocoma and Uintacrinus.[citation needed] In 2005, a stalked crinoid was recorded pulling itself along the sea floor off the Grand Bahama Island. While it has been known that stalked crinoids move, before this recording the fastest motion of a crinoid was 0.6 metres/hour (2 ft/h) 0.167 mm/s (millimeters per second). The 2005 recording showed a crinoid moving much faster, at a rate of 4-5 centimeters/second. (144 to 180) m/h (meters per hour)[15] 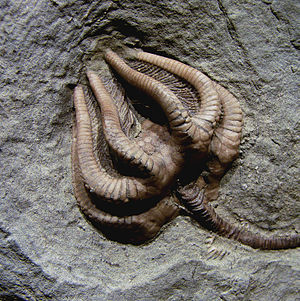 If one ignores the enigmatic Echmatocrinus of the Burgess Shale, the earliest known unequivocal crinoid groups date back to the Ordovician. There are two competing hypotheses pertaining to the origin of the group: the traditional viewpoint holds that crinoids evolved from within the blastozoans (the eocrinoids and their derived descendants the cystoids), whereas the most popular alternative suggests that the crinoids split early from among the edrioasteroids.[16] The debate is difficult to settle, in part because all three candidate ancestors share many characteristics, including radial symmetry, calcareous plates, and stalked or direct attachment to the substrate.[16]

The crinoids underwent two periods of abrupt adaptive radiation; the first during the Ordovician, the other after they underwent a selective mass extinction at the end of the Permian period.[17] This Triassic radiation resulted in forms possessing flexible arms becoming widespread; motility, predominantly a response to predation pressure, also became far more prevalent.[18] This radiation occurred somewhat earlier than the Mesozoic marine revolution, possibly because it was mainly prompted by increases in benthic predation, specifically of echinoids.[19] After the end-Permian extinction, crinoids never regained the morphological diversity they enjoyed in the Paleozoic; they employed a different suite of the ecological strategies open to them from those that had proven so successful in the Paleozoic.[17]

The long and varied geological history of the crinoids demonstrates how well the echinoderms have adapted to filter-feeding. The fossils of other stalked filter-feeding echinoderms, such as blastoids, are also found in the rocks of the Palaeozoic era. These extinct groups can exceed the crinoids in both numbers and variety in certain strata. However, none of these others survived the crisis at the end of the Permian period.