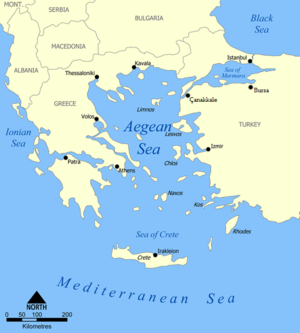 Map of the Sea of Crete

The Sea of Crete (Greek: Κρητικό Πέλαγος, Kritiko Pelagos) is the sea south of the Aegean Sea, north of the island Crete, and south of the Cyclades. The sea also stretches from Kythera east to the Dodecanese islands of Karpathos and Kassos. The bounding seas to the west are the Ionian Sea as well as the rest of the Mediterranean Sea. Ferry routes to and from Piraeus, as well as the southern islands of the Aegean and the Dodecanese, run in this area.