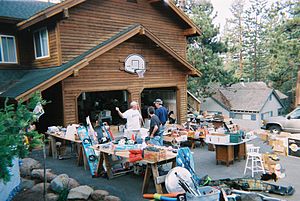 A second-hand or used good is one that is being purchased by or otherwise transferred to a second or later end user. A used good can also simply mean it is no longer in the same condition as it was when transferred to the current owner. When "used" means an item has expended its purpose (such as a used diaper), it is typically called garbage, instead. Used goods may be transferred informally between friends and family for free as "hand-me-downs" or they may be sold for a fraction of their original price at garage sales or in church bazaar fundraisers. Governments require some used goods to be sold through regulated markets, as in the case of items which have safety and legal issues, such as used firearms or cars; for these items, government licensing bodies require certification and registration of the sale, to prevent the sale of stolen, unregistered, or unsafe goods. As well, for some high-value used goods, such as cars and motorcycles, governments regulate used sales to ensure that the government gets its sales tax revenue from the sale.

Second-hand goods can benefit the purchaser as the price paid is lower than the same items bought new. If the reduction in price more than compensates for the possibly shorter remaining lifetime, lack of warranty, and so on, there is a net benefit.

Selling unwanted goods second-hand instead of discarding them obviously benefits the seller.

Recycling goods through the second-hand market both reduces use of resources in manufacturing new goods, and diminishes waste which must be disposed of, both significant environmental benefits. However, manufacturers who profit from sales of new goods lose corresponding sales. Scientific research shows that buying used goods reduces carbon footprint and CO2 emissions significantly compared to the complete product life cycle, because of less production, raw material sourcing and logistics.[1] Often the relative carbon footprint of production, raw material sourcing and the supply chain is unknown.[2] A scientific methodology has been made to analyze how much CO2 emissions are reduced when buying used goods like second hand hardware versus new hardware.[3]

Second-hand goods may have faults which are not apparent even if examined; purchasing sight unseen, for example, from an Internet auction site, has further unknowns. Goods may cause problems beyond their value; for example, furniture may have not easily seen bedbugs,[5] which may cause an infestation which is difficult and expensive to eradicate. Faulty electrical and mechanical goods can be hazardous and dangerous. This is especially a big issue if sold to countries that do not have recycling facilities for these devices, which has led to an issue with electronic waste.

Goods sold second-hand may have been stolen. In this case, in most jurisdictions[which?] the goods do not become the legal property of the purchaser; and knowing purchase of stolen goods is a criminal offense.

Many items that are considered obsolete and worthless in developed countries, such as decade-old hand tools and clothes, are useful and valuable in impoverished communities in the country or in developing countries. Underdeveloped countries like Zambia are extremely welcoming to donated second-hand clothing. At a time when the country's economy was in severe decline the used goods provided jobs by keeping "many others busy with repairs and alterations".[6] It has created a type of spin-off economy at a time when many Zambians were out of work. The used garments and materials that were donated to the country also allowed for the production of "a wide range of fabrics" whose imports had been previously restricted.[6] The trade is essentially executed by women who operate their small business based on local associations and networks. Not only does this provide self-employment, but it also increases household income and enhances the economy.[6] But while many countries would be welcoming of second-hand goods, it is also true that there are countries in need who refuse donated items. Countries like Poland, Philippines and Pakistan have been known to reject second hand items for "fear of venereal disease and risk to personal hygiene".[6] Similar to these countries, India also refuses the import of second-hand clothing but will accept the import of wool fibers, including mutilated hosiery which is a term meaning "woollen garments shredded by machine in the West prior to export".[6] Through the production of shoddy, most of which is produced in Northern India today, unused clothing can be recycled into fibres that are spun into yarn for reuse in 'new' used goods.[6] The acceptance of second hand goods goes beyond the need of the people and into the hands of government officials. United States taxpayers can deduct donations of used goods to charitable organizations. Both Goodwill Industries and the Salvation Army web sites have lists of items with their estimated range of values. Another way that people transfer used goods is by giving them to friends or relatives. When a person gives an item of some value that they have used to someone else, such as a used car or a winter coat, it is sometimes referred to as a "hand-me-down".

Used items can often be found for sale in thrift stores and pawnshops, auctions, garage sales, and in more recent times online auctions. Some stores sell both new and used goods (e.g. car dealerships), while others only sell new goods but may take used items in exchange for credit toward the purchase of newer goods. For example, some musical instrument stores and high-end audio stores only sell new gear, but they will accept good quality used items as trade ins towards the purchase of new items; after the store purchases the used items, they then sell them using online auctions or other services.

When an item is no longer of use to a person they may sell or pawn it, especially when they are in need of money. Items can also be sold (or taken away free of cost) as scrap (e.g. a broken-down old car will be towed away for free for its scrap metal value). Owners may sell the good themselves or to a dealer who then sells it on for a profit. They may also choose to give it away to another person this is often referred to as freecycling. However, because the process takes some effort on part of the owner they may simply keep possession of it or dump it at a landfill instead of going to the trouble of selling it. It has been common to buy second-hand or used good on markets or bazaars for long time. When the web became popular, it became common with web sites such as eBay and Yahoo! Classifieds. 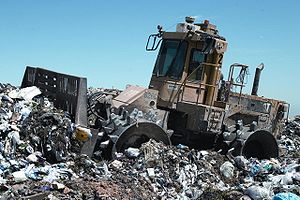 As dumped used goods take up space in landfills some may purchase them for environmental motivations.

The strategy of buying used items is employed by some to save money, as they are typically worth less than the equivalent new items. Purchasing used items for reuse prevents them from becoming waste and saves costly production of equivalent new goods. Motivations for purchase include conserving natural resources and protecting the environment, and may form part of a simple living plan.

Despite this, many people prefer to buy most or all of their goods new.[citation needed] They may feel safer buying new because a warranty is provided or because they are concerned they may be buying stolen goods. Goods purchased secondhand may also be exempt from certain legal requirements (e.g. consumer protection laws). Other consumers may be willing to buy used, but simply do not know where to buy them or lack the expertise needed to make a good purchase (e.g. a used car). Haggling may be involved in purchase of used goods, especially in less formal situations like a yard sale or in pawnshops, where negotiation is often done. Some consumers are uncomfortable or inexperienced in this situation too, and may choose to buy new goods instead. However some simply prefer their goods brand new and/or feel secondhand items are inferior or shabby (the 'yuck factor'), especially in the case of clothing or items used for eating such as plates or cutlery. Although this view is predominant in Western and developed nations, it is not universally held. Populations of many second- and third-world nations often prefer second-hand items for their relative availability and lower cost, as much of the used clothing from the US and European nations are exported to developing nations for resale.[citation needed] 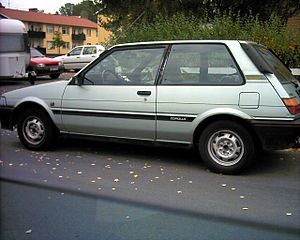 Used cars like this 1980s-era Toyota Corolla are very inexpensive, but a buyer runs the risk of getting stuck with a "lemon".
Main article: Used car

Used cars are especially notable for depreciating in value much faster than many other items. Used cars may have been bought or leased by their previous user, and may be purchased directly from the previous owner or through a dealer. George Akerlof published a paper entitled "The Market for Lemons", examining the effects of information asymmetry on the used car market. Used cars may require more maintenance or have fewer features than later equivalent models. For used plug-in or all-electric vehicle batteries, see V2G.

The Sierra Club, an environmental organization, argues that second-hand purchasing of furniture is the "greenest" way of furnishing a home.[7] Used clothing is often donated to charities which sort and distribute it to people on low incomes for free or a very low price. Rather than distributing the clothing directly, some organizations will sell collected clothing in bulk to a used clothing redistributor, and then use the raised funds to finance either their charitable or for-profit activities, as they see fit.[8] Used clothing unsuitable for sale in an affluent market may still find a buyer or end-user in another market, such as a student market or a less affluent region of a developing country. In developing countries, such as Zambia, second-hand clothing is sorted, recycled and sometimes redistributed to other nations. Some of the scraps are kept and used to create unique fashions which enable the locals to construct identity. Not only does the trade represent a great source of employment for women as well as men, it also supports other facets of the economy: the merchants buy timber and other materials for their stands, metal hangers to display clothing, and food and drinks for costumers. Carriers also find work as they transport the garments from factories to various locations. The second-hand clothing trade is central to the lives of many citizens dwelling in such countries.[9] A Dress Agent will often deal with a consumer buyer and seller directly, taking unwanted clothes that still have value, and reselling them in a shop.

Vintage guitars also became increasingly desired objects among musicians and collectors during the nineties and afterwards.