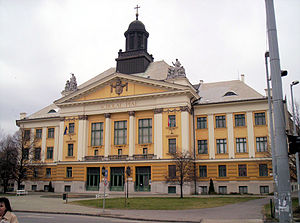 A secondary school is a school which provides secondary education, between the ages of 11 and 16 or 11 and 19, after primary school and before higher education.

in Somalia, secondary school starts from form 9 and ends in form 12. Students start it when they are 14–15 and finish it when they are 18. Students will need to study Somali, Arabic, English or Italian depending on the type of school, Religion, Chemistry, Physics, Biology, Physical Education, Textiles, Art and Design and occasionally Music. When they finish secondary school, they are sent to national training camp before going to either college to train as a primary teacher, joining the army or starting university to attain a degree. Pupils' age can sometimes vary as students may require to repeat a previous year if they had not achieved their required grade or may skip a year if their level of achievement is higher than predicted.

In Bangladesh secondary school is called high school from classes 8 to 10. After this the students sit for their Secondary School Certificate. They then take admission to 'college', which is the name for senior secondary consisting of classes 11 and 12. Apart from that, in the Cambridge system, standard 1 to standard 4 is the junior section, standard 5 to 7 are the junior secondary section and from standard 8 to 10 is the beginning of high school. Students sit for their O' level and A' Level Examinations before applying for Universities.

In Hong Kong the government provides a twelve-year compulsory education to students in the territory. Students are promoted to secondary schools after finishing their primary school education. Until the 2008-2009 school year secondary schools had seven grades (Form/Secondary 1-7), but starting from school year 2009–2010 the 3–3–4 scheme is in operation; Form 4–6 has become Senior Secondary 1–3, Form 7 has been eliminated, and universities provide four years of education instead of three.

In India, high school is a grade of education from Standards IX to X. Standards IX and X are also called Secondary School. Usually, students from ages 14 to 17 study in this section. These schools may be affiliated to national boards (like CBSE, ISC, and NIOS) or various state boards. Education is compulsory until age 14. Although most are stand-alone day schools, some popular schools are residential. Traditional second stage in formal education, typically beginning at ages 14–16 and ending at 16–18.[1] 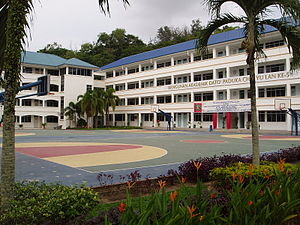 The Form 1 until Form 3 students are lower secondary students, while Form 4 until Form 6 are upper secondary students. There are two major exams in the secondary school, the first is PMR(Penilaian Menengah Rendah or Lower Secondary Assessment), although it is abolished now and replaced with PT3 (Pentaksiran Tingkatan 3) for the 3rd Former and SPM(Sijil Pelajaran Malaysia or Malaysian Certificate of Education) for the 5th Former. The PT3 consists eight compulsory subjects, Malay Language, English Language, Mathematics, Science, History, Geography, Living Skills and Islamic Education(for Muslim students only). While for the SPM, there are six compulsory subjects; similar to those taken in PT3 except Living Skills and Geography (those subjects are turn to be the elective subjects). There are six sections of elective subjects, such as;

In Singapore, Singaporeans aged between 13 to 17 are required to attend secondary school after taking the Primary School Leaving Examination (PSLE) at the end of primary education. The examination determines whether the student is ready to leave primary school by passing; places in secondary schools are allocated according to students' performance in the examination. The performance of the examination also determines which track or stream students end up in. The four different tracks or streams are: "Special", "Express", "Normal (Academic)", or "Normal (Technical)". Starting 2008, the "Special" stream has merged with the "Express" stream and are now considered one single stream.[2]

Main article: Education in the Republic of Ireland

In Ireland secondary schools go from first year to sixth year, with the typical student age being between 12 and 18. It is split into two cycles, the Junior Cycle a three-year course with the Junior Certificate taking place at the end of third year and the Senior Cycle a two to three-year course with the Leaving Certificate taking place at the end of the sixth year. Fourth year, also known as Transition Year, is optional, but is included as part of the senior cycle. The majority of secondary schools no longer allow their students to skip this year. Subjects vary slightly between the two certificates however English, Irish and Maths are mandatory in both (with the exception of Irish in certain situations) these three subjects are offered at Higher, Ordinary and Foundation Level (except Leaving Certificate English). Other subjects are only offered at Higher or Ordinary Level with the exception of Junior Certificate subject Civic, Social and Political Education which is Common Level. Education is mandatory up until the age of 16 or until the Junior Certificate has been sat. The majority of secondary schools also require students to wear school uniforms and in some cases a Physical-Education uniform as well. Secondary schools are sometimes called "college", e.g. Clongowes Wood College in County Kildare.

In Italy education is organized into 3 levels:

In Moldova education is organized in 3 levels:

In England and Wales, secondary school is for children from the ages of 11 to 16 or 11 to 18.[3] Secondary school incorporates Key Stage 3 and Key Stage 4 of the National Curriculum (Year Seven to Year Eleven). After Year 11, they may leave school but must stay in some form of education until they are in the equivalent of Year 13/Upper Sixth. This could involve doing A-Levels or BTECS at a sixth form college, vocational diplomas at college or an apprenticeship. The last year group that could leave compulsory education after Year 11 was the Year 11 class of 2012. (Started Reception/Foundation Year in 2000.)

The "Core Curriculum" is the compulsory secondary curriculum for Key Stage 3 and 4 years/Forms 7-11/1-5.

GCSEs must be taken in English, Maths and Science.

Also compulsory until Year 11/ Form 5 are:

The "Core Curriculum" plus the other Key Foundation subjects

As the term High School originated in Edinburgh, Scotland, this is the most common phrase used when referring to the second tier of education in the country. Scotland has a long history of universal provision of public education, and the Scottish education system is distinctly different from the other countries of the United Kingdom. The Scotland Act 1998 gives Scottish Parliament legislative control over all education matters, and the Education (Scotland) Act 1980 is the principal legislation governing education in Scotland.

The majority of state schools are non-denominational, but as a result of the Education Act 1918, separate denominational state schools were also established. The vast majority of denominational state schools are Roman Catholic but there are also a number of Scottish Episcopal schools. The school buildings are built and maintained by the Roman Catholic Church were handed over to the state under the Education Act. Since then, the Catholic schools are fully funded by the Scottish Government and administered by the Learning Directorate. As part of the deal, there are specific legal provisions to ensure the promotion of a Catholic ethos in such schools: applicants for positions in the areas of Religious Education, Guidance or Senior Management must be approved by the Roman Catholic Church in Scotland, which also appoints a chaplain to each of its schools.

Qualifications at the secondary school and post-secondary (further education) level are provided by the Scottish Qualifications Authority, which is the national awarding and accrediting body in Scotland, and delivered through various schools, colleges and other centres. Political responsibility for education at all levels is vested in the Scottish Parliament and the Learning Directorate.

In the United States, the term can refer to two types of school. The first type is the same as a high school (grades 9–12), while the second type refers to an alternative school which is sometimes called a secondary school; In some jurisdictions "secondary school" may refer to an institution that houses grades 6–12, or both middle school and high school years, for example "Robinson Secondary School"

In Canada secondary schools (also known as High schools) are educational institutions consisting most commonly of students enrolled in grades ten through twelve (ages fifteen to eighteen). Four provinces' high schools consist of grades nine to twelve, and in Quebec, high school years are Secondary 1 through to Secondary 5 (grades 7–11). Variations and subdivisions of these structures are fairly common.

In Brazil, admission to secondary school requires the student to achieve a specific grade in primary school (normally 6 on grades from 0 to 10). Secondary School is the same as High School plus second Fundamental Year in all Brazilian states, and is normally attended by 10- to 18-year-old students.

In Mexico, "secondary school" refers to educational institutions usually consisting of students enrolled in grades 7 through 9 (ages 12 to 15 years old). Some schools require an entrance exam. Known as secundarias, these schools are the equivalent of junior high schools. From the secundaria, students may be tracked into vocational schools known as escuelas técnicas, CBTIs or CETIs or into Escuelas Preparatorias what provide a traditional lyceum or gymnasium education similar to American high schools. Private, denominational secundarias are known as colegios. In rural regions, telesecundaria is offered via online and television formats. Less than 70% of the population completes middle school in Mexico.

The secondary is called secondary education, teens go from 14 to 18 years. Classes begin in March, are 2 semesters and end in December, but Private schools or colleges can start on another date. In July given the winter holidays of 2 weeks or 1 and a half, in January begin summer vacation until the beginning of March.

In Venezuela "secondary schools" are educational institutions teaching grades 7 to 11 (ages 12 to 16 years). Classes begin in September, are 3 terms, and end in July. In Venezuela secondary education is called "bachillerato". It is divide into two, middle education, from grades 7 to 9, and diversified education or high school, covering grades 10 and 11.

In Australia, secondary school is called high school, from Year 7 to Year 12 in every state but, South Australia, and Western Australia, where high school is started in Year 8.[4] In both Tasmania and the Australian Capital Territory, high school constitutes Years 7 to 10 with college (senior secondary) consisting of Year 11 and 12.