From Infogalactic: the planetary knowledge core
(Redirected from Secondary sources)
Jump to: navigation, search
For Wikipedia's policy on the use of secondary sources, see WP:SECONDARY.
Not to be confused with Secondary sector. 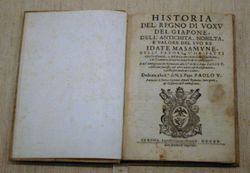 Scipione Amati's History of the Kingdom of Voxu (1615) an example of a secondary source.

In scholarship, a secondary source[1][2] is a document or recording that relates or discusses information originally presented elsewhere. A secondary source contrasts with a primary source, which is an original source of the information being discussed; a primary source can be a person with direct knowledge of a situation, or a document created by such a person. However, as discussed in detail in the section below on classification, how to classify a source is not always an obvious decision.

Secondary sources involve generalization, analysis, synthesis, interpretation, or evaluation of the original information. Primary and secondary are relative terms, and some sources may be classified as primary or secondary, depending on how they are used.[3][4][5][6] A third level, the tertiary source, such as an encyclopedia or dictionary, resembles a secondary source in that it contains analysis, but attempts to provide a broad introductory overview of a topic.[1][7]

Many sources can be considered either primary or secondary, depending on the context in which they are used.[8] Moreover, the distinction between primary and secondary sources is subjective and contextual,[9] so that precise definitions are difficult to make.[10] For example, if a historical text discusses old documents to derive a new historical conclusion, it is considered to be a primary source for the new conclusion, but a secondary source of information found in the old documents.[citation needed] Other examples in which a source can be both primary and secondary include an obituary[11] or a survey of several volumes of a journal counting the frequency of articles on a certain topic.[11]

Whether a source is regarded as primary or secondary in a given context may change, depending upon the present state of knowledge within the field.[12] For example, if a document refers to the contents of a previous but undiscovered letter, that document may be considered "primary", since it is the closest known thing to an original source, but if the letter is later found, it may then be considered "secondary".[13]

Some other modern languages use more than one word for the English word "source". German usually uses Sekundärliteratur ("secondary literature") for secondary sources for historical facts, leaving Sekundärquelle ("secondary source") to historiography. A Sekundärquelle is a source which can tell about a lost Primärquelle ("primary source"), such as a letter quoting from minutes which are no longer known to exist, so cannot be consulted by the historian.

In general, secondary sources are self-described as review articles or meta-analysis.

Primary source materials are typically defined as "original research papers written by the scientists who actually conducted the study." An example of primary source material is the Purpose, Methods, Results, Conclusions sections of a research paper (in IMRAD style) in a scientific journal by the authors who conducted the study.[14] In some fields, a secondary source may include a summary of the literature in the Introduction of a scientific paper, a description of what is known about a disease or treatment in a chapter in a reference book, or a synthesis written to review available literature.[14] A survey of previous work in the field in a primary peer-reviewed source is secondary source information. This allows secondary sourcing of recent findings in areas where full review articles have not yet been published.

In library and information sciences, secondary sources are generally regarded as those sources that summarize or add commentary to primary sources in the context of the particular information or idea under study.[1][2]

An important use of secondary sources in the field of mathematics has been to make difficult mathematical ideas and proofs from primary sources more accessible to the public;[17] in other sciences tertiary sources are expected to fulfill the introductory role.

Secondary sources in history and humanities are usually books or scholarly journals, from the perspective of a later interpreter, especially by a later scholar. In the humanities, a peer reviewed article is always a secondary source. The delineation of sources as primary and secondary first arose in the field of historiography, as historians attempted to identify and classify the sources of historical writing. In scholarly writing, an important objective of classifying sources is to determine the independence and reliability of sources.[18] In original scholarly writing, historians rely on primary sources, read in the context of the scholarly interpretations.[19]

In the legal field, source classification is important because the persuasiveness of a source usually depends upon its history. Primary sources may include cases, constitutions, statutes, administrative regulations, and other sources of binding legal authority, while secondary legal sources may include books, the headnotes of case reports, articles, and encyclopedias.[22] Legal writers usually prefer to cite primary sources because only primary sources are authoritative and precedential, while secondary sources are only persuasive at best.[23]

An autobiography can be a secondary source in history or the humanities when used for information about topics other than its subject. For example, many first hand accounts of events in World War I written in the post-war years were influenced by the then prevailing perception of the war which was significantly different from contemporary opinion.[25]