The Secretariat of State is the oldest dicastery in the Roman Curia, the central papal governing bureaucracy of the Roman Catholic Church. It is headed by the Cardinal Secretary of State and performs all the political and diplomatic functions of Vatican City and the Holy See. The Secretariat is divided into two sections, the Section for General Affairs and the Section for Relations with States, known as the First Section and Second Section, respectively.[1]

History of the Secretariat of State

Leo X established another position, the Secretarius Intimus, to assist the Cardinal who had control of the affairs of State and to attend to correspondence in languages other than Latin, chiefly with the Apostolic Nuncios (who at that time were evolving into permanent diplomatic representatives). From these beginnings, the Secretariat of State developed, especially at the time of the Council of Trent. 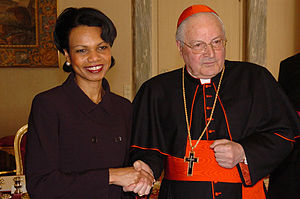 For a long time, the Secretarius Intimus, also called Secretarius Papae or Secretarius Maior, was almost always a Prelate, often endowed with episcopal rank. It was only at the beginning of the Pontificate of Innocent X that someone already a Cardinal and not a member of the Pope's family was called to this high office. Innocent XII definitively abolished the office of Cardinal Nephew, and the powers of that office were assigned to the Cardinal Secretary of State alone.

On 19 July 1814, Pius VII established the [Sacred Congregation for the Extraordinary Ecclesiastical Affairs], expanding the Congregation Super Negotiis Ecclesiasticis Regni Galliarum established by Pius VI in 1793. With the Apostolic Constitution Sapienti Consilio of 29 June 1908, Saint Pius X divided the Sacred Congregation for Extraordinary Ecclesiastical Affairs in the form fixed by the Codex Iuris Canonici of 1917 (Can. 263) and he specified the duties of each of the three sections: the first was concerned essentially with extraordinary affairs, while the second attended to the ordinary affairs, and the third, until then an independent body (the Chancery of Apostolic Briefs), had the duty of preparing and dispatching pontifical Briefs.

With the Apostolic Constitution Regimini Ecclesiae Universae[2] of 15 August 1967, Paul VI reformed the Roman Curia, implementing the desire expressed by the Bishops in the Second Vatican Council. This gave a new face to the Secretariat of State, suppressing the Chancery of Apostolic Briefs, formerly the third section, and transforming the former first section, the Sacred Congregation for the Extraordinary Ecclesiastical Affairs, into a body distinct from the Secretariat of State, though closely related to it, which was to be known as the Council for the Public Affairs of the Church.

On 28 June 1988, John Paul II promulgated the Apostolic Constitution Pastor Bonus,[3] which introduced a reform of the Roman Curia and divided the Secretariat of State into two sections: the Section for General Affairs and the Section for Relations with States, which incorporated the Council for the Public Affairs of the Church.

The Section for General Affairs handles the normal operations of the Church including organizing the activities of the Roman Curia, making appointments to curial offices, publishing official communications, papal documents, handling the concerns of embassies to the Holy See, and keeping the papal seal and Fisherman's Ring. Abroad, the Section for General Affairs is responsible for organizing the activities of nuncios around the world in their activities concerning the local church.[4]

Assessor for General Affairs of the Secretariat of State

Section for Relations with States

The Section is responsible for the Holy See's interactions with civil governments. According to the relevant articles of the Apostolic Constitution Pastor Bonus,[5] the responsibilities of the Secretary for Relations with States are: