Secure Shell, or SSH, is a cryptographic (encrypted) network protocol to allow remote login and other network services to operate securely over an unsecured network.[1]

SSH provides a secure channel over an unsecured network in a client-server architecture, connecting an SSH client application with an SSH server.[2] Common applications include remote command-line login and remote command execution, but any network service can be secured with SSH. The protocol specification distinguishes between two major versions, referred to as SSH-1 and SSH-2.

The most visible application of the protocol is for access to shell accounts on Unix-like operating systems, but it sees some limited use on Windows as well. In 2015, Microsoft announced that they would include native support for SSH in a future release.[3]

SSH was designed as a replacement for Telnet and for unsecured remote shell protocols such as the Berkeley rlogin, rsh, and rexec protocols. Those protocols send information, notably passwords, in plaintext, rendering them susceptible to interception and disclosure using packet analysis.[4] The encryption used by SSH is intended to provide confidentiality and integrity of data over an unsecured network, such as the Internet, although files leaked by Edward Snowden indicate that the National Security Agency can sometimes decrypt SSH, allowing them to read the content of SSH sessions.[5]

SSH uses public-key cryptography to authenticate the remote computer and allow it to authenticate the user, if necessary.[2] There are several ways to use SSH; one is to use automatically generated public-private key pairs to simply encrypt a network connection, and then use password authentication to log on.

Another is to use a manually generated public-private key pair to perform the authentication, allowing users or programs to log in without having to specify a password. In this scenario, anyone can produce a matching pair of different keys (public and private). The public key is placed on all computers that must allow access to the owner of the matching private key (the owner keeps the private key secret). While authentication is based on the private key, the key itself is never transferred through the network during authentication. SSH only verifies whether the same person offering the public key also owns the matching private key. In all versions of SSH it is important to verify unknown public keys, i.e. associate the public keys with identities, before accepting them as valid. Accepting an attacker's public key without validation will authorize an unauthorized attacker as a valid user.

On Unix-like systems, the list of authorized public keys is typically stored in the home directory of the user that is allowed to log in remotely, in the file ~/.ssh/authorized_keys.[6] This file is respected by SSH only if it is not writable by anything apart from the owner and root. When the public key is present on the remote end and the matching private key is present on the local end, typing in the password is no longer required (some software like Message Passing Interface (MPI) stack may need this password-less access to run properly). However, for additional security the private key itself can be locked with a passphrase.

The private key can also be looked for in standard places, and its full path can be specified as a command line setting (the option -i for ssh). The ssh-keygen utility produces the public and private keys, always in pairs.

SSH also supports password-based authentication that is encrypted by automatically generated keys. In this case the attacker could imitate the legitimate server side, ask for the password, and obtain it (man-in-the-middle attack). However, this is possible only if the two sides have never authenticated before, as SSH remembers the key that the server side previously used. The SSH client raises a warning before accepting the key of a new, previously unknown server. Password authentication can be disabled.

The standard TCP port 22 has been assigned for contacting SSH servers.[7]

An SSH client program is typically used for establishing connections to an SSH daemon accepting remote connections. Both are commonly present on most modern operating systems, including Mac OS X, most distributions of GNU/Linux, OpenBSD, FreeBSD, NetBSD, Solaris and OpenVMS. Notably, Windows is one of the few modern desktop/server OSs that does not include SSH by default. Proprietary, freeware and open source (e.g. PuTTY,[8] and the version of OpenSSH which is part of Cygwin[9]) versions of various levels of complexity and completeness exist. Native Linux file managers (e.g. Konqueror) can use the FISH protocol to provide a split-pane GUI with drag-and-drop. The open source Windows program WinSCP[10] provides similar file management (synchronization, copy, remote delete) capability using PuTTY as a back-end. Both WinSCP[11] and PuTTY[12] are available packaged to run directly off of a USB drive, without requiring installation on the client machine. Setting up an SSH server in Windows typically involves installation (e.g. via installing Cygwin[13]).

SSH is important in cloud computing to solve connectivity problems, avoiding the security issues of exposing a cloud-based virtual machine directly on the Internet. An SSH tunnel can provide a secure path over the Internet, through a firewall to a virtual machine.[14]

In 1995, Tatu Ylönen, a researcher at Helsinki University of Technology, Finland, designed the first version of the protocol (now called SSH-1) prompted[citation needed] by a password-sniffing attack at his university network. The goal of SSH was to replace the earlier rlogin, TELNET and rsh protocols, which did not provide strong authentication nor guarantee confidentiality. Ylönen released his implementation as freeware in July 1995, and the tool quickly gained in popularity. Towards the end of 1995, the SSH user base had grown to 20,000 users in fifty countries.

In January 2006, well after version 2.1 was established, RFC 4253 specified that an SSH server which supports both 2.0 and prior versions of SSH should identify its protoversion as 1.99.[16] This is not an actual version but a method to identify backward compatibility.

In 1999, developers wanting a free software version to be available went back to the older 1.2.12 release of the original SSH program, which was the last released under an open source license. Björn Grönvall's OSSH was subsequently developed from this codebase. Shortly thereafter, OpenBSD developers forked Grönvall's code and did extensive work on it, creating OpenSSH, which shipped with the 2.6 release of OpenBSD. From this version, a "portability" branch was formed to port OpenSSH to other operating systems.[17]

As of 2005[update], OpenSSH was the single most popular SSH implementation, coming by default in a large number of operating systems. OSSH meanwhile has become obsolete.[18] OpenSSH continues to be maintained and now supports both 1.x and 2.0 versions.

"Secsh" was the official Internet Engineering Task Force's (IETF) name for the IETF working group responsible for version 2 of the SSH protocol.[19] In 2006, a revised version of the protocol, SSH-2, was adopted as a standard. This version is incompatible with SSH-1. SSH-2 features both security and feature improvements over SSH-1. Better security, for example, comes through Diffie–Hellman key exchange and strong integrity checking via message authentication codes. New features of SSH-2 include the ability to run any number of shell sessions over a single SSH connection.[20] Due to SSH-2's superiority and popularity over SSH-1, some implementations such as Lsh[21] and Dropbear[22] support only the SSH-2 protocol. 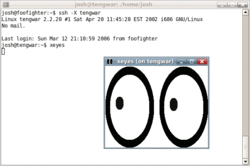 Example of tunneling an X11 application over SSH: the user 'josh' has SSHed from the local machine 'foofighter' to the remote machine 'tengwar' to run xeyes.

Logging into OpenWrt via SSH using PuTTY running on Windows.

SSH is a protocol that can be used for many applications across many platforms including most Unix variants (Linux, the BSDs including Apple's OS X, and Solaris), as well as Microsoft Windows. Some of the applications below may require features that are only available or compatible with specific SSH clients or servers. For example, using the SSH protocol to implement a VPN is possible, but presently only with the OpenSSH server and client implementation. 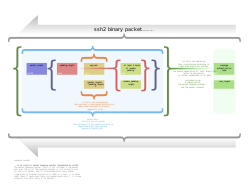 Diagram of the SSH-2 binary packet.

The SSH-2 protocol has an internal architecture (defined in RFC 4251) with well-separated layers, namely:

This open architecture provides considerable flexibility, allowing the use of SSH for a variety of purposes beyond a secure shell. The functionality of the transport layer alone is comparable to Transport Layer Security (TLS); the user-authentication layer is highly extensible with custom authentication methods; and the connection layer provides the ability to multiplex many secondary sessions into a single SSH connection, a feature comparable to BEEP and not available in TLS.

These are intended for performance enhancements of SSH products:

In 1998 a vulnerability was described in SSH 1.5 which allowed the unauthorized insertion of content into an encrypted SSH stream due to insufficient data integrity protection from CRC-32 used in this version of the protocol.[27][28] A fix known as SSH Compensation Attack Detector[29] was introduced into most implementations. Many of these updated implementations contained a new integer overflow vulnerability[30] that allowed attackers to execute arbitrary code with the privileges of the SSH daemon, typically root.

Since SSH-1 has inherent design flaws which make it vulnerable, it is now generally considered obsolete and should be avoided by explicitly disabling fallback to SSH-1.[citation needed] Most modern servers and clients support SSH-2.[citation needed]

In November 2008, a theoretical vulnerability was discovered for all versions of SSH which allowed recovery of up to 32 bits of plaintext from a block of ciphertext that was encrypted using what was then the standard default encryption mode, CBC.[33] The most straightforward solution is to use CTR mode instead of CBC mode, since this renders SSH resistant to the attack.[33]

On December 28, 2014 Der Spiegel published classified information[5] leaked by whistleblower Edward Snowden which suggests that the National Security Agency may be able to decrypt some SSH traffic. The technical details associated with such a process were not disclosed.

It was later modified and expanded by the following publications.