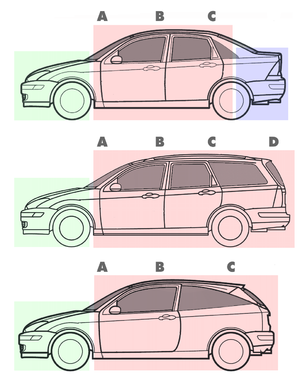 A sedan /sᵻˈdæn/ (American, Canadian, Australian, and New Zealand English) or saloon (British and Irish English) is a passenger car in a three-box configuration with A, B & C-pillars and principal volumes articulated in separate compartments for engine, passenger and cargo.[1] The passenger compartment features two rows of seats and adequate passenger space in the rear compartment for adult passengers. The cargo compartment is typically in the rear, with the exception of some rear-engined models, such as the Renault Dauphine, Tatra T613, Volkswagen Type 3 and Chevrolet Corvair. It is one of the most common car body styles. A battery electric sedan such as the Tesla Model S has no engine compartment, but a front cargo compartment and a rear compartment for cargo or optionally for additional passengers. 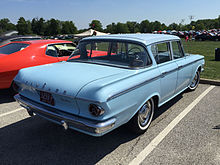 The primary purpose of the sedan is to transport people and their baggage on ordinary roads.[2] Sedan versions of the automobile body style have a central pillar (B-pillar) that supports the roof and come in two- and four-door versions.[3] Sedans usually have a two-box or three-box body.[2]

In the U.S., the term sedan has been used to denote a car with fixed window frames, as opposed to the hardtop style without a "B" pillar and where the sash or window frame, if any, winds down with the glass. Popular in the U.S. from the 1950s through the 1970s, true hardtop body designs have become increasingly rare.

The shape and position of the automobile greenhouse on both two- and four-door sedans may be identical, with only the center B-pillar positioned further back to accommodate the longer doors on the two-door versions. For example, 1962 Rambler Classic sedans feature identical windshield, A-pillar, roof, C-pillar, and rear window. The two-door sedans have longer doors and include roll down rear side window and even a quarter window that is shaped to follow the reverse slant of the C-pillar, just like on the rear doors of the four-door sedans.[4] 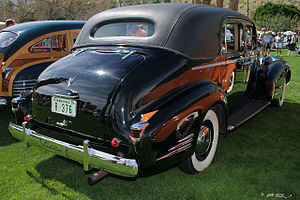 A two- or four-door design built on a normal chassis, but with a shorter roof and interior space. Club sedans were most often available in high-level U.S. models from the mid-1920s to the mid-1950s.[5] Originating from the club car on a Pullman passenger train that was well appointed, the "club" term imparted a sense of class to the smaller-cabin versions in the range of models.[5] 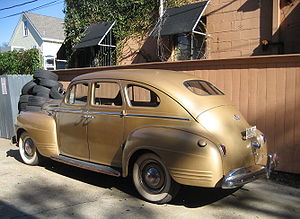 A fastback sedan is a two-box sedan, with continuous slope from the roof to the base of the decklid (trunk lid), but excludes the hatchback feature. Marketing terminology is often misleading in this area - for example, Daimler AG incorrectly calls the Mercedes-Benz CLS-Class sedan a four-door coupé because its semi-fastback design tries to give the impression of a coupé.[citation needed] Certain sedans are edging close[weasel words] to being one-box vehicles, where the windshield is steeply raked from the hood/bonnet and the rear window slopes toward almost the end of the car, leaving just a short rear deck that is part of the trunk lid — the 2006 4-door JDM Honda Civic is an example of this.[citation needed] They are not fastbacks because their bodyline changes from the roof to the rear deck. Their steeply raked rear windows end with a decklid that does not continue down to the bumper. Instead, their rear ends are tall — sometimes in a Kammback style — to increase trunk space.

Typically this design is chosen for its aerodynamic advantages. Automakers can no longer afford the penalty in fuel consumption produced by the traditional notchback three box form.[citation needed]

In historic terminology, a sedan will have a frame around the door windows, while the hardtop has frameless door glass. A true hardtop sedan design also has no center or "B" pillar for roof support behind the front doors).[6] This pillarless body style offers greater visibility.[7] However, it requires extra underbody strengthening for structural rigidity. The hardtop design can be considered separately (i.e., a vehicle can be simply called a four-door hardtop), or it can be called a hardtop sedan. During the 1960s and 1970s, hardtop sedans were often sold as sport sedans by several American manufacturers and they were among the top selling body styles. During the 1980s, automakers in the U.S. focused on removing weight and increasing strength, and their new four-door sedans with B-pillars were called pillared hardtops or pillared sedans. The sport sedan term has since been appropriated for other uses. In Japan the hardtop design was used for several luxury-type sedans during the 1990s. 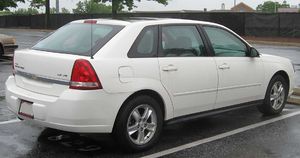 Hatchback (a.k.a. liftback) sedans typically have the fastback profile, but instead of a trunk lid, the entire back of the vehicle lifts up (using a liftgate or hatch). A vehicle with four passenger doors and a liftgate at the rear can be called a four-door hatchback, five-door hatchback, four-door hatchback sedan, or five-door sedan. An example of such is the Chevrolet Malibu Maxx and Audi A5 Sportback. There can also be two-door hatchback sedans (three-door sedans), by the same technical explanation for two-door sedans. Examples of this design are the Ford Focus, Ford Fiesta, Volkswagen Golf, Chevrolet Chevette and Daewoo Nexia(Opel Kadett E) 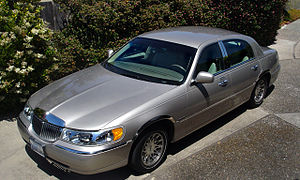 The Lincoln Town Car is often used as a chauffeured car in the U.S.

Strictly speaking limousine sedans have a separate compartment for the driver and the passenger compartment is long enough to contain at least two comfortable, forward-facing bench seats. Vehicles used for these means are usually Lincoln Town Car, Cadillac, Mercedes-Benz, or Rolls-Royce.

The term limousine can refer to a large sedan, especially if hired from a service. Chauffeured limousines are primarily used by individuals for weddings, businesses for meetings, as well as for airport and sightseeing transportation. Chauffeurs are professional drivers, usually with experience in the transportation industry or tourism industry. Chauffeured sedans are owned either by private owners, livery services, or corporations. Large corporations as well as governments commonly provide luxury sedans to top executives, as well as VIP guests. Chauffeured sedans, such as the Lincoln Town Car, may also be stretched into limousines that are capable of seating up to twenty people. 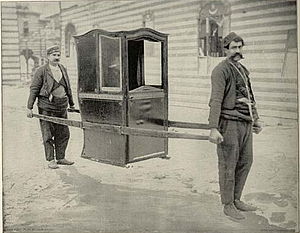 The word sedan is possibly derived from a southern Italian dialect derivative of Italian sedia "chair" (the first sedan was said to have been introduced from Naples). However, Portuguese and Spanish navigators and colonists encountered litters of various sorts in India, Japan, Mexico, and Peru. They were imported into Spain in the late sixteenth century. Soon the fashion spread into France and then England. All the names for these derived from the root "sed-" from the Latin "sella" - the traditional name for a carried chair.[8]

The first automobile to use the configuration was the 1899 Renault Voiturette Type B. The first closed car, for at least 4 persons, which used the word sedan was the 1911 Speedwell sedan, which was manufactured by the Speedwell Motor Co in Dayton, Ohio.[9] But even before that time completely closed cars were called saloons or limousines, like the 1905 Rational 4-door limousine[10] or the 1907 Renault 4-door limousine[11] or the 1910 Stella 2-door saloon.[12] The words saloon or limousine do not exclusively mean a fully closed car.[13] Cars which are called sedans are almost always fully closed. The term "convertible sedan" was used in the 1930s to describe a car with a soft, foldable top and roll-up windows, very much like a convertible coupe.

The derivation from the town of Sedan, Ardennes in France, where it was said to have been made or first used, lacks historical evidence, according to Oxford English Dictionary.

In American English and American Spanish, the term sedan is used (accented as "sedán" in Spanish). The engine compartment, at the front, is covered by the hood; the cargo compartment at the rear is called the trunk.

In British English, a car of this configuration is called a saloon. The engine compartment cover is the bonnet, the cargo-compartment boot is at the rear. Hatchback sedans are known simply as hatchbacks (not hatchback saloons); long-wheelbase luxury saloons may be referred to as limousines.

In Australia the American term sedan is used, albeit with the British terms boot and bonnet being used. In New Zealand the British terms "boot", "bonnet" and "windscreen" are most commonly used, but the American terms are understood by most of the population. However, the American terms "sedan" and "station wagon" are predominantly used, with "saloon" only finding occasional usage, particularly in the field of motor racing. In other languages, sedans are known as berline (French), berlina (European Spanish, European Portuguese, Romanian, and Italian); although these terms also may include hatchbacks. These terms, besides sedan, derive from types of horse-drawn carriages. In German, the term Limousine is used for sedans, and "Stretch-Limousine" for limousines.