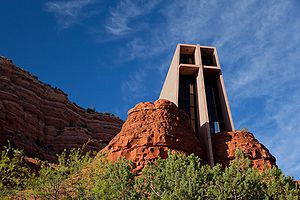 Sedona /sᵻˈdoʊnə/ is a city that straddles the county line between Coconino and Yavapai counties in the northern Verde Valley region of the U.S. state of Arizona. As of the 2010 census, its population was 10,031.[3]

Sedona's main attraction is its array of red sandstone formations. The formations appear to glow in brilliant orange and red when illuminated by the rising or setting sun. The red rocks form a popular backdrop for many activities, ranging from spiritual pursuits to the hundreds of hiking and mountain biking trails.

Sedona was named after Sedona Arabella Miller Schnebly (1877–1950), the wife of Theodore Carlton Schnebly, the city's first postmaster, who was celebrated for her hospitality and industriousness.[4]

The first documented human presence in Sedona area dates to between 11,500 to 9000 B.C. It was not until 1995 that a Clovis projectile point discovered in Honanki revealed the presence of the Paleo-Indians, who were big-game hunters. Around 9000 B.C., the pre-historic Archaic people appeared in the Verde Valley. These were hunter-gatherers and their presence in the area was longer than in other areas of the Southwest, most likely because of the ecological diversity and large amount of resources. They left by 300 A.D. There is an assortment of rock art left by the Archaic people in places near Sedona such as Palatki and Honanki.[5]

Around 650 A.D., the Sinagua people entered the Verde Valley. Their culture is known for its art such as pottery, basketry and their masonry. They left rock art, pueblos, and cliff dwellings such as Montezuma Castle, Honanki, Palatki and Tuzigoot, especially in the later period of their presence. The Sinagua abandoned the Verde Valley about 1400 A.D.[5] Researchers believe the Sinagua and other clans moved to the Hopi mesas in Arizona and the Zuni and other pueblos in New Mexico.[6]

The Yavapai and Apache tribes were forcibly removed from the Verde Valley in 1876, to the San Carlos Indian Reservation, 180 miles (290 km) southeast. About 1,500 people were marched, in midwinter, to San Carlos. Several hundred lost their lives. The survivors were interned for 25 years. About 200 Yavapai and Apache people returned to the Verde Valley in 1900 and have since intermingled as a single political entity although culturally distinct [8] residing in the Yavapai-Apache Nation.

The first Anglo settler, John J. Thompson, moved to Oak Creek Canyon in 1876. The early settlers were farmers and ranchers. Oak Creek Canyon was well known for its peach and apple orchards. In 1902, when the Sedona post office was established, there were 55 residents. In the mid-1950s, the first telephone directory listed 155 names. Some parts of the Sedona area were not electrified until the 1960s.

Sedona began to develop as a tourist destination, vacation-home and retirement center in the 1950s. Most of the development seen today was constructed in the 1980s and 1990s. As of 2007, there are no large tracts of undeveloped land remaining.[9]

Chapel of the Holy Cross

Sedona played host to more than sixty Hollywood productions from the first years of movies into the 1970s. The small town, which served as a kind of microcosm of Hollywood history, sits about 120 miles north of Phoenix, nestled between thousand-foot-high walls of stone in lushly forested Oak Creek Canyon and the wide open space of the Verde Valley, and it was the diversity of this unspoiled landscape that made it such an ideal location to shoot outdoor scenes. Stretching as far back as 1923, Sedona’s signature red rocks were a fixture in major Hollywood productions—including enduring favorites such as Johnny Guitar, Angel and the Badman, Desert Fury, Blood on the Moon, and 3:10 to Yuma—but typically were identified to audiences as the terrain of Texas, California, Nevada, and even Canadian border territory.[11] 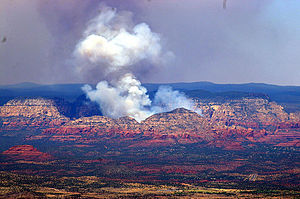 Sedona is located at Lua error in Module:Coordinates at line 668: callParserFunction: function "#coordinates" was not found.,[13] which is in the Upper Sonoran Desert of northern Arizona. At an elevation of 4,500 feet (1,372 m), Sedona has mild winters and hot summers.

Panoramic view of the immediate Sedona area, covering an angle of view of approximately 90 degrees. The line of bare (deciduous) trees at center left marks the course of Oak Creek. 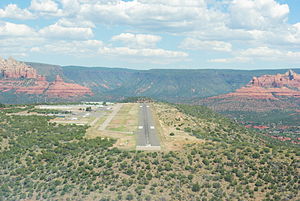 Sedona Airport viewed from the south, showing its location atop Airport Mesa

There were 4,928 households out of which 15.8% had children under the age of 18 living with them, 48.6% were married couples living together, 6.6% had a female householder with no husband present, and 41.9% were non-families. 32.2% of all households were made up of individuals and 14.2% had someone living alone who was 65 years of age or older. The average household size was 2.06 and the average family size was 2.52.

Politically, Uptown Sedona, the Gallery District and the Chapel area (all in Coconino County) and West Sedona (in Yavapai County) form the City of Sedona. Originally founded in 1902, it was incorporated as a city in 1988. The unincorporated Village of Oak Creek, 7 miles (11 km) to the south and well outside the Sedona city limits, is a significant part of the Sedona community.

Numerous events are hosted annually in the Sedona area, including:

There is a specialized New Age tourist industry in Sedona, where the "Harmonic Convergence" was organized by Jose Arguelles in 1987. Some purport that "spiritual vortices" are concentrated in the Sedona area at Bell Rock, Airport Mesa, Cathedral Rock, and Boynton Canyon.[24][25]

Sedona is served by the Sedona-Oak Creek Unified School District.

Red Rock Early Learning Center[26] is a year-round Preschool program designed for children aged 3–5 years old. Their normal school year runs from August to May each year, with a summer session offered during June and July. It is licensed by the ADHS, and located in West Sedona Elementary School building 300.

Verde Valley School, a boarding International Baccalaureate high school with many international students, is located between the Village of Oak Creek and Red Rock Crossing. It hosts numerous 'traditions' and performances open to the community. Their mascot is the coyote. Total attendance measures about 120 students per year, grades 9-12.

Sedona Red Rock High School (SRRHS), built in 1994, is located on the western edge of town in West Sedona. The school's mascot is the Scorpion. The high school's new campus, a series of single story buildings, is located opposite the Sedona campus of Yavapai College.

The University of Sedona is an unaccredited institution providing ministerial training and education in metaphysics.