From Infogalactic: the planetary knowledge core
Jump to: navigation, search
"Self-construction" redirects here. For other uses, see Self-construction (disambiguation).
Not to be confused with Self-awareness, Self-consciousness, Self-esteem, or Self-image. 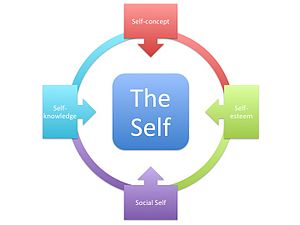 One's self-perception is defined by one's self-concept, self-knowledge, self-esteem, and social self.

One's self-concept (also called self-construction, self-identity, self-perspective or self-structure) is a collection of beliefs about oneself[1][2] that includes elements such as academic performance,[3][4][5][6][7] gender roles and sexuality,[8][9][10] and racial identity.[11] Generally, self-concept embodies the answer to "Who am I?".[12] 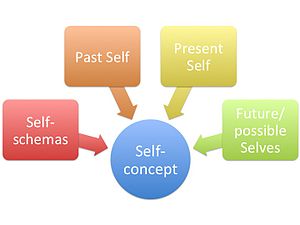 One's self-concept is made up of self-schemas, and their past, present, and future selves.

Self-concept is distinguishable from self-awareness, which refers to the extent to which self-knowledge is defined, consistent, and currently applicable to one's attitudes and dispositions.[13] Self-concept also differs from self-esteem: self-concept is a cognitive or descriptive component of one's self (e.g. "I am a fast runner"), while self-esteem is evaluative and opinionated (e.g. "I feel good about being a fast runner").

Self-concept is made up of one's self-schemas, and interacts with self-esteem, self-knowledge, and the social self to form the self as whole. It includes the past, present, and future selves, where future selves (or possible selves) represent individuals' ideas of what they might become, what they would like to become, or what they are afraid of becoming. Possible selves may function as incentives for certain behavior.[12][14]

The perception people have about their past or future selves is related to the perception of their current selves. The temporal self-appraisal theory[15] argues that people have a tendency to maintain a positive self-evaluation by distancing themselves from their negative self and paying more attention to their positive one. In addition, people have a tendency to perceive the past self less favorably[16] (e.g. "I'm better than I used to be") and the future self more positively[17] (e.g. "I will be better than I am now").

Psychologists Carl Rogers and Abraham Maslow were the first to establish the notion of self-concept. According to Rogers, everyone strives to reach an "ideal self". Rogers also hypothesized that psychologically healthy people actively move away from roles created by others' expectations, and instead look within themselves for validation. On the other hand, neurotic people have "self-concepts that do not match their experiences...They are afraid to accept their own experiences as valid, so they distort them, either to protect themselves or to win approval from others."[18]

The self-categorization theory developed by John Turner states that the self-concept consists of at least two "levels": a personal identity and a social one. In other words, one's self-evaluation relies on self-perceptions and how others perceive them. Self-concept can alternate rapidly between the personal and social identity.[19] Children and adolescents begin integrating social identity into their own self-concept in elementary school by assessing their position among peers.[20] By age 5, acceptance from peers has a significant impact on children's self-concept, affecting their behavior and academic success.[21]

The self-concept is an internal model that uses self-assessments in order to define one's self-schemas.[22] Features such as personality, skills and abilities, occupation and hobbies, physical characteristics, etc. are assessed and applied to self-schemas, which are ideas of oneself in a particular dimension (e.g., someone that considers themselves a geek will associate "geek-like" qualities to themselves). A collection of self-schemas make up one's overall self-concept. For example, the statement "I am lazy" is a self-assessment that contributes to self-concept. Statements such as "I am tired", however, would not be part of someone's self-concept, since being tired is a temporary state and therefore cannot become a part of a self-schema. A person's self-concept may change with time as reassessment occurs, which in extreme cases can lead to identity crises.

Researchers debate over when self-concept development begins. Some assert that gender stereotypes and expectations set by parents for their children impact children's understanding of themselves by approximately age 3.[23] Others suggest that self-concept develops later, around age 7 or 8, when children are developmentally prepared to interpret their own feelings and abilities, as well as feedback they receive from parents, teachers, and peers.[1] Despite differing opinions about the onset of self-concept development, researchers agree on the importance of one’s self-concept, which influences people’s behaviors and cognitive and emotional outcomes including (but not limited to) academic achievement, levels of happiness, anxiety, social integration, self-esteem, and life-satisfaction.[20][24][25]

Academic self-concept refers to the personal beliefs about their academic abilities or skills.[20] Some research suggests that it begins developing from ages 3 to 5 due to influence from parents and early educators.[23] By age 10 or 11, children assess their academic abilities by comparing themselves to their peers.[26] These social comparisons are also referred to as self-estimates.[27] Self-estimates of cognitive ability are most accurate when evaluating subjects that deal with numbers, such as math.[27] Self-estimates were more likely to be poor in other areas, such as reasoning speed.[27][clarification needed]

Some researchers suggest that, to raise academic self-concept, parents and teachers need to provide children with specific feedback that focuses on their particular skills or abilities.[28] Others also state that learning opportunities should be conducted in groups (both mixed-ability and like-ability) that downplay social comparison, as too much of either type of grouping can have adverse effects on children's academic self-concept and the way they view themselves in relation to their peers.[20][24]

Worldviews about the self in relation to others differs across and within cultures.[29] Western cultures place particular importance on independence and the expression of one's own attributes[30] (i.e. the self is more important than the group). Asian cultures, however, favor an interdependent view of the self:[29] interpersonal relationships are more important than one’s individual accomplishments, and individuals experience a sense of oneness with the group.[29] Such "identity fusion" can have positive and negative consequences.[29] Identity fusion can give people the sense that their existence is meaningful (e.g. Japanese nuclear plant workers expose themselves to radiation to help fix the plant after a tsunami); and this type of mindset is associated with a high quality of life.[29] On the other hand, such strong interdependence can lead to catastrophic events such as acts of terrorism.[29]

Girls are more likely to wait their turn to speak, agree with others, and acknowledge the contributions of others. Boys, on the other hand, build larger group relationships based on shared interests and activities. Boys are more likely to threaten, boast, and call names, suggesting the importance of dominance and hierarchy in groups of male friends.[34] In mixed-sex pairs, girls were more likely to passively watch a male partner play, and boys were more likely to be unresponsive to what their female partners were saying.[36] The social characteristics of boys and girls tend to carry over later in life as they become men and women.[34]

Main article: Outline of self