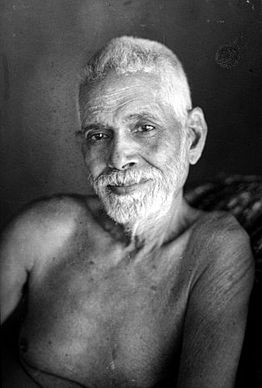 Self-enquiry, also spelled self-inquiry (Sanskrit vichara, also called jnana-vichara[1] or ātma-vichār), is the constant attention to the inner awareness of "I" or "I am" recommended by Ramana Maharshi as the most efficient and direct way of discovering the unreality of the "I"-thought.

Ramana taught that the "I"-thought will disappear and only "I-I"[web 1] or self-awareness remains. This results in an "effortless awareness of being",[2] and by staying with it[web 2] this "I-I" gradually destroys the vasanas "which cause the 'I'-thought to rise,"[2] and finally the 'I'-thought never rises again, which is Self-realization or liberation.[2]

Vichāra (Sanskrit: विचार) means deliberation; its root is वि (prefix to verbs and nouns it expresses) – चर् (to move, roam, obtain knowledge of).[3] It is the faculty of discrimination between right and wrong; it is deliberation about cause and effect, and the final analysis;[4] it is also the enquiry into the nature of the Atman, Satya, Ishvara and Brahman.[5] This Sanskrit word, Vichāra, does not have a corresponding word in English. Vichāra is reflection and contemplation upon the meaning of Vedantic truths, and leads the individual to true knowledge, it leads to Brahman, the Universal Self.[6]

Vichara is also called jnana-vichara[1] or ātma-vichār by his devotees.

Ātman (IAST: ātman, Sanskrit: आत्मन्) is a Sanskrit word that is usually translated as "self".[note 1] The root *ēt-men (breath) is cognate with Old English "æþm", Greek "asthma", German "Atem": "atmen" (to breathe). It is derived from Latin "anima" (breath,soul), which is cognate to Sanskrit "ánilaḥ" (wind). Although "ánilaḥ" and "ātman" have similar meaning, they are not etymologically related.[citation needed]

In Hindu philosophy, especially in the Vedanta school of Hinduism, Ātman is the first principle,[7] the true self of an individual beyond identification with phenomena, the essence of an individual. To attain salvation (liberation), a human being must acquire self-knowledge (atma jnana), which is to realise that one's true self (Ātman) is identical with the transcendent self Brahman (or paramatman).

Ramana's teachings on Self-enquiry originated in his own awakening at age 16, when he became firmly aware of death. It made him aware of the Self. Ramana summarised his insight into "aham sphurana" (Self-awareness)[note 2] to a visitor in 1945:[web 2][note 3]

In the vision of death, though all the senses were benumbed, the aham sphurana (Self-awareness) was clearly evident, and so I realised that it was that awareness that we call "I", and not the body. This Self-awareness never decays. It is unrelated to anything. It is Self-luminous. Even if this body is burnt, it will not be affected. Hence, I realised on that very day so clearly that that was "I".[web 2]

At first, Ramana thought that he was possessed by a spirit, "which had taken up residence in his body".[web 3] This feeling remained for several weeks.[web 3]

Later in life, he called his death experience akrama mukti, "sudden liberation", as opposed to the krama mukti, "gradual liberation" as in the Vedanta path of jnana yoga:[web 2][note 4]

‘Some people,’ he said, 'start off by studying literature in their youth. Then they indulge in the pleasures of the world until they are fed up with them. Next, when they are at an advanced age, they turn to books on Vedanta. They go to a guru and get initiated by him and then start the process of sravana, manana and nididhyasana, which finally culminates in samadhi. This is the normal and standard way of approaching liberation. It is called krama mukti [gradual liberation]. But I was overtaken by akrama mukti [sudden liberation] before I passed through any of the above-mentioned stages.'[web 2]

According to David Frawley, "atma-vichara" is the most important practice in the Advaita Vedanta tradition, predating its popularisation by Ramana Maharshi.[web 5] It is part of the eighth limb of Patanjali's Yoga Sutras, which describes the various stages of samadhi. Meditation on "I-am-ness" is a subtle object of meditation in savikalpa samadhi.[9] It is also described in the Yoga Vasistha, a syncretic work which may date from the 6th or 7rh century CE, and shows influences from Yoga, Samkhya, Saiva Siddhanta and Mahayana Buddhism, especially Yogacara.[10]

Ramana taught that by paying close attention to the 'I'-thought, this 'I'-thought will disappear and only "I-I"[web 1] or Self-awareness remains. This results in an "effortless awareness of being",[2] and by staying with it[web 2] this "I-I" gradually destroys the vasanas "which cause the 'I'-thought to rise,"[2] and finally the 'I'-thought never rises again, which is Self-realization or liberation.[2]

Ramana gave upadesa, "instruction or guidance given to a disciple by his Guru",[web 6] pointing to the true Self of the devotees and showing them the truth of it.[11] As author and long-time devotee David Godman explains,

Beginners in self-enquiry were advised by Sri Ramana to put their attention on the inner feeling of 'I' and to hold that feeling as long as possible. They would be told that if their attention was distracted by other thoughts they should revert to awareness of the 'I'-thought whenever they became aware that their attention had wandered. He suggested various aids to assist this process – one could ask oneself 'Who am I?’ or 'Where does this I come from?’ — but the ultimate aim was to be continuously aware of the 'I' which assumes that it is responsible for all the activities of the body and the mind.[web 7]

Self-enquiry can be practised at all times:

Self-enquiry should not be regarded as a meditation practice that takes place at certain hours and in certain positions; it should continue throughout one's waking hours, irrespective of what one is doing. Sri Ramana Maharshi saw no conflict between working and self-enquiry and he maintained that with a little practice it could be done under any circumstances. He did sometimes say that regular periods of formal practice were good for beginners, but he never advocated long periods of sitting meditation and he always showed his disapproval when any of his devotees expressed a desire to give up their mundane activities in favour of a meditative life.[web 7]

Ramana stated that the Self is awareness:

The Truth is that Self is constant and unintermittent Awareness. The object of enquiry is to find the true nature of the Self as Awareness. Let one practise enquiry so long as separateness is perceived.[web 8]

Giving up awareness of not-self leads to pure awareness:

Questioning 'Who am I?' within one's mind, when one reaches the Heart, the individual 'I' sinks crestfallen, and at once reality manifests itself as 'I-I'. Though it reveals itself thus, it is not the ego 'I' but the perfect being the Self Absolute.[web 1]

19. 'Whence does the 'I' arise?' Seek this within. The 'I' then vanishes. This is the pursuit of wisdom.

Therefore, leaving the corpse-like body as an actual corpse and remaining without even uttering the word 'I' by mouth, if one now keenly enquires, 'What is it that rises as 'I'? then in the Heart a certain soundless sphurana, 'I-I',[note 7] will shine forth of its own accord. It is an awareness that is single and undivided, the thoughts which are many and divided having disappeared. If one remains still without leaving it, even the sphurana – having completely annihilated the sense of the individuality, the form of the ego, 'I am the body' — will itself in the end subside, just like the flame that catches the camphor. This alone is said to be liberation by great ones and scriptures.[web 1]

Ramana "never felt moved to formulate his teaching of his own accord, either verbally or in writing".[12] The few writings he's credited with "came into being as answers to questions asked by his disciples or through their urging".[12] Only a few hymns were written on his own initiative.[12]

Ramana's earliest teachings are documented in the book Nan Yar?(Who am I?), in which he elaborates on the "I" and Self-enquiry. The original book was first written in Tamil, and published by Sri Pillai.[13] The essay version of the book (Sri Ramana Nutrirattu) prepared by Ramana is considered definitive, as unlike the original it had the benefit of his revision and review. "Nan Yar" was documented by his disciple M. Sivaprakasam Pillai, who was already heavily influenced by traditional Advaita, and so had added notes about the traditional Advaitic negation method for his own clarification; these additional notes were later removed by Ramana.[14] A careful translation with notes is available in English as 'The Path of Sri Ramana, Part One' by Sri Sadhu Om, one of the direct disciples of Ramana.[15]