A self-organizing map (SOM) or self-organising feature map (SOFM) is a type of artificial neural network (ANN) that is trained using unsupervised learning to produce a low-dimensional (typically two-dimensional), discretized representation of the input space of the training samples, called a map. Self-organizing maps are different from other artificial neural networks as they apply competitive learning as opposed to error-correction learning (such as backpropagation with gradient descent), and in the sense that they use a neighborhood function to preserve the topological properties of the input space. 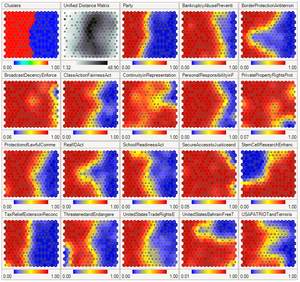 A self-organizing map showing U.S. Congress voting patterns visualized in Synapse. The first two boxes show clustering and distances while the remaining ones show the component planes. Red means a yes vote while blue means a no vote in the component planes (except the party component where red is Republican and blue is Democratic).

This makes SOMs useful for visualizing low-dimensional views of high-dimensional data, akin to multidimensional scaling. The artificial neural network introduced by the Finnish professor Teuvo Kohonen in the 1980s is sometimes called a Kohonen map or network.[1][2] The Kohonen net is a computationally convenient abstraction building on work on biologically neural models from the 1970s[3] and morphogenesis models dating back to Alan Turing in the 1950s[4]

A self-organizing map consists of components called nodes or neurons. Associated with each node are a weight vector of the same dimension as the input data vectors, and a position in the map space. The usual arrangement of nodes is a two-dimensional regular spacing in a hexagonal or rectangular grid. The self-organizing map describes a mapping from a higher-dimensional input space to a lower-dimensional map space. The procedure for placing a vector from data space onto the map is to find the node with the closest (smallest distance metric) weight vector to the data space vector.

While it is typical to consider this type of network structure as related to feedforward networks where the nodes are visualized as being attached, this type of architecture is fundamentally different in arrangement and motivation.

Useful extensions include using toroidal grids where opposite edges are connected and using large numbers of nodes.

It is also common to use the U-Matrix.[5] The U-Matrix value of a particular node is the average distance between the node's weight vector and that of its closest neighbors.[6] In a square grid, for instance, we might consider the closest 4 or 8 nodes (the Von Neumann and Moore neighborhoods, respectively), or six nodes in a hexagonal grid.

Large SOMs display emergent properties. In maps consisting of thousands of nodes, it is possible to perform cluster operations on the map itself.[7]

The goal of learning in the self-organizing map is to cause different parts of the network to respond similarly to certain input patterns. This is partly motivated by how visual, auditory or other sensory information is handled in separate parts of the cerebral cortex in the human brain.[8]

The weights of the neurons are initialized either to small random values or sampled evenly from the subspace spanned by the two largest principal component eigenvectors. With the latter alternative, learning is much faster because the initial weights already give a good approximation of SOM weights.[9]

The network must be fed a large number of example vectors that represent, as close as possible, the kinds of vectors expected during mapping. The examples are usually administered several times as iterations.

The training utilizes competitive learning. When a training example is fed to the network, its Euclidean distance to all weight vectors is computed. The neuron whose weight vector is most similar to the input is called the best matching unit (BMU). The weights of the BMU and neurons close to it in the SOM lattice are adjusted towards the input vector. The magnitude of the change decreases with time and with distance (within the lattice) from the BMU. The update formula for a neuron v with weight vector Wv(s) is

where s is the step index, t an index into the training sample, u is the index of the BMU for D(t), α(s) is a monotonically decreasing learning coefficient and D(t) is the input vector; Θ(u, v, s) is the neighborhood function which gives the distance between the neuron u and the neuron v in step s.[10] Depending on the implementations, t can scan the training data set systematically (t is 0, 1, 2...T-1, then repeat, T being the training sample's size), be randomly drawn from the data set (bootstrap sampling), or implement some other sampling method (such as jackknifing).

This process is repeated for each input vector for a (usually large) number of cycles λ. The network winds up associating output nodes with groups or patterns in the input data set. If these patterns can be named, the names can be attached to the associated nodes in the trained net.

During mapping, there will be one single winning neuron: the neuron whose weight vector lies closest to the input vector. This can be simply determined by calculating the Euclidean distance between input vector and weight vector.

While representing input data as vectors has been emphasized in this article, it should be noted that any kind of object which can be represented digitally, which has an appropriate distance measure associated with it, and in which the necessary operations for training are possible can be used to construct a self-organizing map. This includes matrices, continuous functions or even other self-organizing maps.

Consider an n×m array of nodes, each of which contains a weight vector and is aware of its location in the array. Each weight vector is of the same dimension as the node's input vector. The weights may initially be set to random values.

Now we need input to feed the map —The generated map and the given input exist in separate subspaces. We will create three vectors to represent colors. Colors can be represented by their red, green, and blue components. Consequently our input vectors will have three components, each corresponding to a color space. The input vectors will be:

The data vectors should preferably be normalized (vector length is equal to one) before training the SOM.

These are the variables needed, with vectors in bold,

File:Self oraganizing map cartography.jpg
Cartographical representation of a self-organizing map (U-Matrix) based on Wikipedia featured article data (word frequency). Distance is inversely proportional to similarity. The "mountains" are edges between clusters. The red lines are links between articles. 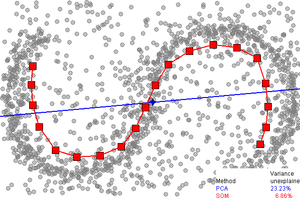 One-dimensional SOM versus principal component analysis (PCA) for data approximation. SOM is a red broken line with squares, 20 nodes. The first principal component is presented by a blue line. Data points are the small grey circles. For PCA, the fraction of variance unexplained in this example is 23.23%, for SOM it is 6.86%.[11]

There are two ways to interpret a SOM. Because in the training phase weights of the whole neighborhood are moved in the same direction, similar items tend to excite adjacent neurons. Therefore, SOM forms a semantic map where similar samples are mapped close together and dissimilar ones apart. This may be visualized by a U-Matrix (Euclidean distance between weight vectors of neighboring cells) of the SOM.[5][6][12]

The other way is to think of neuronal weights as pointers to the input space. They form a discrete approximation of the distribution of training samples. More neurons point to regions with high training sample concentration and fewer where the samples are scarce.

SOM may be considered a nonlinear generalization of Principal components analysis (PCA).[13] It has been shown, using both artificial and real geophysical data, that SOM has many advantages[14][15] over the conventional feature extraction methods such as Empirical Orthogonal Functions (EOF) or PCA.

Originally, SOM was not formulated as a solution to an optimisation problem. Nevertheless, there have been several attempts to modify the definition of SOM and to formulate an optimisation problem which gives similar results.[16] For example, Elastic maps use the mechanical metaphor of elasticity to approximate principal manifolds:[17] the analogy is an elastic membrane and plate.