From Infogalactic: the planetary knowledge core
Jump to: navigation, search
"SPAA" redirects here. For an academic conference in the fields of parallel computing and distributed computing, see Symposium on Parallelism in Algorithms and Architectures. 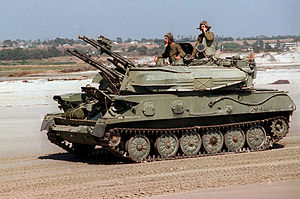 Soviet-made ZSU-23-4 at Camp Pendleton. The ZSU-23 is the canonical modern SPAAG system.

Specific weapon systems used include machine guns, autocannons, larger guns, or missiles, and some mount both guns and longer-ranged missiles (e.g. the Pantsir-S1). Platforms used include both trucks and heavier combat vehicles such as APCs and tanks, which add protection from aircraft, artillery, and small arms fire for front line deployment. 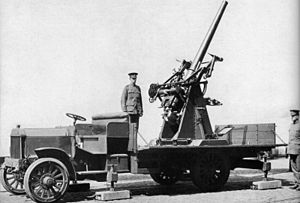 Anti-aircraft machine guns have long been mounted on trucks, and these were quite common during World War I. A predecessor of the WW2 German "88" anti-aircraft gun, the WWI German 77 mm anti-aircraft gun, was truck-mounted and used to great effect against British tanks.

The British QF 3 inch 20 cwt was mounted on trucks for use on the Western Front.

Between the two World Wars the United Kingdom developed the Birch gun, a general purpose artillery piece on an armoured tracked chassis capable of maintaining formation with their current tanks. The gun could be elevated for anti-aircraft use.

Vickers Armstrong also developed a SPAAG based on the chassis of the Mk.E 6-ton light tank/Dragon Medium Mark IV tractor, mounting a Vickers QF-1 "Pom-Pom" gun of 40 mm. About 26 were sold to Siam and saw action as Infantry support guns and AA guns during the Franco-Thai war (1940-1941) along with 30 Vickers Mk.E Type B 6-ton tanks. This was probably the first tracked SPAAG manufactured in series. Later the British also developed a version of the Mk.VI light tank armed with 4 machine guns that was known as Light Tank AA Mk.I. And also a twin 15 mm version based on the Light Tank Mk.V was built.

Among early pre-war pioneers of self-propelled AA guns were the Germans. By the time of the war, they fielded the SdKfz 10/4 and 6/2, cargo halftracks mounting single 20 mm or 37 mm AA guns (respectively). Later in the war similar German halftracks mounted quadruple 20 mm weapons. 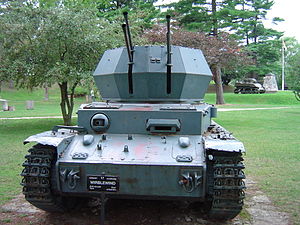 German Wirbelwind at CFB Borden. The Wirbelwind is typical of WWII and 1950s SPAAGs, itself being a Flakvierling quadmount AA battery on a Panzer IV chassis.

Larger guns followed on larger trucks, but these mountings generally required off-truck setup in order to unlimber the stabilizing legs these guns needed. One exception to this rule was the Italian Cannone da 90/53 which was highly effective when mounted on trucks, a fit known as the "autocannoni da 90/53". The 90/53 was a feared weapon, notably in the anti-tank role, but only a few hundred had been produced by the time of the armistice in 1943.

Other nations tended to work on truck chassis. Starting in 1941, the British developed the "en portee" method of mounting an anti-tank gun (initially a 2 pounder) on a truck. This was to prevent the weapon from being damaged by long-distance towing across rough, stony deserts, and it was intended only to be a carrying method, with the gun unloaded for firing. However, crews tended to fire their weapons from their vehicles for the mobility this method provided, with consequent casualties.[1] This undoubtedly inspired their Morris C9/B (officially the "Carrier, SP, 4x4, 40 mm AA"), a Bofors 40 mm AA gun mounted on a chassis derived from the Morris "Quad" Field Artillery Tractor truck.[1] Similar types, based on 3-ton lorries, were produced in Britain, Canada and Australia, and together formed the most numerous self-propelled AA guns in British service.[1]

The U.S. Army brought truck-towed Bofors 40 mm AA guns along with truck-mounted units fitted with mechanized turrets when they sailed, first for Great Britain and then onto France. The turrets carried four .50 inch (12.7 mm) machine guns, which were designed to be adjusted to converge at the single point where enemy aircraft were expected to appear at low altitude in conduction of strafing runs directed at large infantry and field artillery units.

Interest in mobile AA turned to heavier vehicles with the mass and stability needed to easily train weapons of all sizes. Probably the desire, particularly in German service, for anti-aircraft vehicles to be armoured for their own protection also assisted this trend.

The concept of an armored SPAAG was pioneered by Hungary during World War II Hungary by producing the 40M Nimrod based on the Luftvärnskanonvagn L-62 Anti II license acquired from Sweden. Germany followed later with their "Flakpanzer" series. German World War II SPAAGs include the Möbelwagen, Wirbelwind, Ostwind and Kugelblitz. Other forces followed with designs of their own, notably the American M16 created by mounting quadruple M2HB Browning machine guns on a M3 Half-track.

The British developed their own SPAAGs throughout the war mounting multiple machine guns and light cannon on various tank and armoured car chassis and by 1943, the Crusader AA tanks, which mounted the Bofors 40 mm gun or two-three Oerlikon 20 mm cannon. Although used during the Normandy landings, by that point German aircraft were contained by the Allies own air forces and they were largely unneeded. 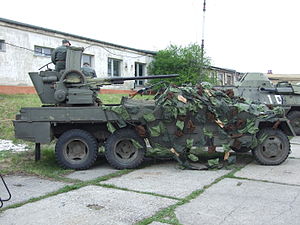 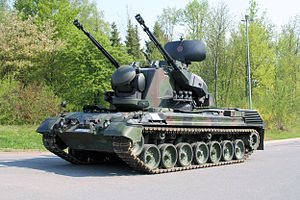 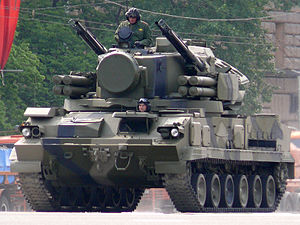 Typical of more modern designs, the Tunguska-M1 mounts both missiles and cannons.

The introduction of jet engines and the subsequent rough doubling of aircraft speeds greatly reduced the effectiveness of the SPAAG against attack aircraft.[dubious – discuss] A typical SPAAG round might have a muzzle velocity on the order of 1,000 metres per second (3,300 ft/s) and might take as long as two to three seconds to reach a target at its maximum range. An aircraft flying at 1,000 kilometres per hour (620 mph) is moving at a rate of about 280 metres per second (920 ft/s). This means the aircraft will have moved hundreds of meters during the flight time of the shells, greatly complicating the aiming problem to the point where close passes were essentially impossible to aim using manual gunsights. This speed also allowed the aircraft to rapidly fly out of range of the guns; even if the aircraft passes directly over the SPAAG, it would be within its firing radius for under 30 seconds.

SPAAG development continued through the early 1950s with ever-larger guns, improving the range and allowing the engagement to take place at longer distances where the crossing angle was smaller and aiming was easier. Examples including the 40 mm U.S. M42 Duster and the 57 mm Soviet ZSU-57-2. However, both were essentially obsolete before they entered service, and found employment solely in the ground-support role. The M42 was introduced to the Vietnam War to counter an expected North Vietnamese air offensive, but when this failed to materialize it was used as an effective direct-fire weapon. The ZSU-57 found similar use in the Yugoslav Wars, where its high-angle fire was useful in the mountainous terrain.

By the late 1950s the US Army had given up on the SPAAG concept, considering all gun-based weapons to be useless against modern aircraft. This belief was generally held by many forces, and the anti-aircraft role turned almost exclusively to missile systems. The Soviet Union remained an outlier, beginning development of a new SPAAG in 1957, which emerged as the ZSU-23-4 in 1965. This system included search-and-track radars, fire control, and automatic gun-laying, greatly increasing its effectiveness against modern targets. The ZSU-23 proved very effective when used in concert with SAMs; the presence of SAMs forced aircraft to fly low to avoid their radars, placing them within range of the ZSUs.

The success of the ZSU-23 led to a resurgence of SPAAG development. This was also prompted by the introduction of attack helicopters in the 1970s, which could hide behind terrain and then "pop up" for an attack lasting only a few tens of seconds; missiles were ineffective at low altitudes, while the helicopters would often be within range of the guns for a rapid counterattack. Notable among these later systems is the German Gepard, the first western SPAAG to offer performance equal to or better than the ZSU. This system was widely copied in various NATO forces. US attempts to introduce a new SPAAG were doomed to become a series of half-measures and dismal failures; the failure of the missile-based MIM-46 Mauler led to the introduction of the optically-aimed M163 VADS of very short range, and the long-delayed and finally cancelled M247 Sergeant York which offered almost laughable performance in testing, unable to hit even stationary targets.[citation needed]

SPAAG development continues, with many modern examples often combining both guns and short-range missiles. Examples include the Soviet/Russian Tunguska-M1, which supplanted the ZSU-23 in service, newer versions of the Gepard, and the British Marksman turret, which can be used on a wide variety of platforms.