From Infogalactic: the planetary knowledge core
Jump to: navigation, search
This article is about the racial and ethnic term popular in the 19th and early 20th centuries. For the history of ancient groups who spoke Semitic languages, see ancient Semitic-speaking peoples. 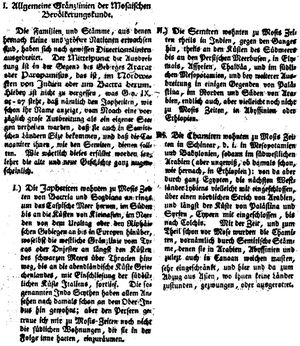 The first depiction of historical ethnology of the world separated into the Biblical sons of Noah: Semitic, Hamitic and Japhetic, 1771, Gatterer's Einleitung in die Synchronistische Universalhistorie[1]

Semitic people or Semitic cultures (from the biblical "Shem", Hebrew: שם‎) was a term for an ethnic, cultural or racial group who speak or spoke the Semitic languages.[2][3][4][5] The terminology was first used in the 1770s by members of the Göttingen School of History, who derived the name from Shem, one of the three sons of Noah in the Book of Genesis.[6] The term "Semitic", together with the parallel terms Hamitic and Japhetic, is now largely obsolete outside of linguistics.[7][8][9] However, in archaeology, the term is sometimes used informally as "a kind of shorthand" for ancient Semitic-speaking peoples.[9]

Further information: Archaeogenetics of the Near East, Caucasian race, Hamitic and Scientific racism 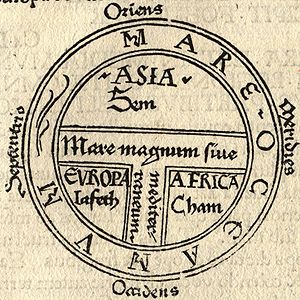 This T and O map, from the first printed version of Isidore of Seville's Etymologiae, identifies the three known continents as populated by descendants of Sem (Shem), Iafeth (Japheth) and Cham (Ham).

In the racialist classifications of Carleton S. Coon, the Semitic peoples were considered to be members of the Caucasian race, not dissimilar in appearance to the neighbouring Indo-European, Northwest Caucasian, Berber and Kartvelian-speaking peoples of the region.[10] As language studies are interwoven with cultural studies, the term also came to describe the religions (ancient Semitic and Abrahamic) and Semitic-speaking ethnicities as well as the history of these varied cultures as associated by close geographic and linguistic distribution.[11]

Some recent genetic studies have found (by analysis of the DNA of Semitic-speaking peoples) that they have some common ancestry. Although no significant common mitochondrial results have been found, Y-chromosomal links between modern Semitic-speaking peoples of the Middle East like Arabs, Hebrews, Mandaeans, Samaritans, and Assyrians have shown links, despite differences contributed from other groups (see Y-chromosomal Aaron).

A DNA study of Jews and Palestinian Arabs (including Bedouins) found that these were more closely related to each other than to people of the Arabian Peninsula, Ethiopian Semitic-speaking people (Amharas, Tigrayans, Harari and Tigre people), and the Arabic speakers of North Africa.[12][13]

Genetic studies indicate that modern Jews (Ashkenazi, Sephardic and Mizrahi specifically), Levantine Arabs, Assyrians, Samaritans, Maronites, Druze, Mandaeans, and Mhallami, all have an ancient indigenous common Near Eastern heritage which can be genetically mapped back to the ancient Fertile Crescent, but often also display genetic profiles distinct from one another, indicating the different histories of these peoples.[14] 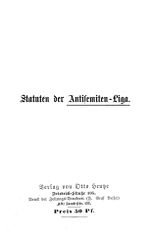 1879 statute of the Antisemitic League, the organization which first popularized the term

The terms "anti-Semite" or "antisemitism" came by a circuitous route to refer more narrowly to anyone who was hostile or discriminatory towards Jews in particular.[15]

Anthropologists of the 19th century such as Ernest Renan readily aligned linguistic groupings with ethnicity and culture, appealing to anecdote, science and folklore in their efforts to define racial character. Moritz Steinschneider, in his periodical of Jewish letters Hamaskir (3 (Berlin 1860), 16), discusses an article by Heymann Steinthal[16] criticising Renan's article "New Considerations on the General Character of the Semitic Peoples, In Particular Their Tendency to Monotheism".[17] Renan had acknowledged the importance of the ancient civilisations of Mesopotamia, Israel etc. but called the Semitic races inferior to the Aryan for their monotheism, which he held to arise from their supposed lustful, violent, unscrupulous and selfish racial instincts. Steinthal summed up these predispositions as "Semitism", and so Steinschneider characterised Renan's ideas as "anti-Semitic prejudice".[18]

In 1879 the German journalist Wilhelm Marr, in a pamphlet called Der Weg zum Siege des Germanenthums über das Judenthum ("The Way to Victory of Germanicism over Judaism"), began the politicisation of the term by speaking of a struggle between Jews and Germans. He accused them of being liberals, a people without roots who had Judaized Germans beyond salvation. In 1879 Marr's adherents founded the "League for Anti-Semitism",[19] which concerned itself entirely with anti-Jewish political action.

Objections to the usage of the term, such as the obsolete nature of the term Semitic as a racial term and the exclusion of discrimination against non-Jewish Semitic peoples, have been raised since at least the 1930s.[20][21]