Khakaure Senusret III (also written as Senwosret III or the hellenised form Sesostris III) was a pharaoh of Egypt. He ruled from 1878 BC to 1839 BC during a time of great power and prosperity,[1] and was the fifth monarch of the Twelfth Dynasty of the Middle Kingdom. Among his achievements was the building of the Canal of the Pharaohs. He was a great pharaoh of the Twelfth Dynasty and is considered to be perhaps the most powerful Egyptian ruler of the dynasty. Consequently, he is regarded as one of the sources for the legend about Sesostris. His military campaigns gave rise to an era of peace and economic prosperity that reduced the power of regional rulers and led to a revival in craftwork, trade and urban development.[2] Senusret III was one of the few kings who were deified and honored with a cult during their own lifetime.[3] 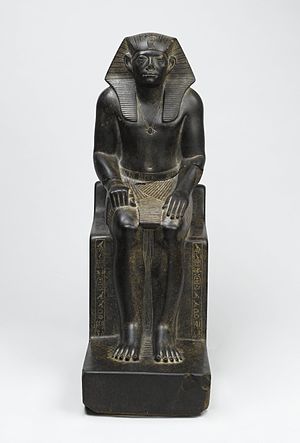 Granite statue of Senwosret III. He is shown wearing the nemes headcloth with a cobra at the front, the pleated shendyt kilt, and the bull's tail, visible between his legs. Beneath his feet are nine bows, symbolizing Egypt's traditional enemies under his power. Unlike his predecessors, who were shown with idealized facial features, Senwosret has heavily lidded eyes, lined and haggard cheeks, and pursed lips. The reason for this change is not known, but imitations of his features by later kings and private individuals suggest that Senwosret's features were intended to convey his virtuous qualities. Brooklyn Museum

Senusret III cleared a navigable canal through the first cataract.[5] (This was different from the Canal of the Pharaohs, which Senusret III also apparently tried to build.) He also relentlessly pushed his kingdom's expansion into Nubia (from 1866 to 1863 BC) where he erected massive river forts including Buhen, Semna and Toshka at Uronarti.

He carried out at least four major campaigns into Nubia in his Year 8, 10, 16 and 19 respectively.[6] His Year 8 stela at Semna documents his victories against the Nubians through which he is thought to have made safe the southern frontier, preventing further incursions into Egypt.[7] Another great stela from Semna dated to the third month of Year 16 of his reign mentions his military activities against both Nubia and Canaan. In it, he admonished his future successors to maintain the new border which he had created:

His final campaign which was in Year 19 was less successful because the king's forces were caught by the Nile being lower than normal and they had to retreat and abandon their campaign to avoid being trapped in hostile Nubian territory.[9]

Such was his forceful nature and immense influence that Senusret III was worshipped as a god in Semna by later generations.[10] Jacques Morgan, in 1894, found rock inscriptions near Sehel Island documenting his digging of a canal under the king. Senusret III erected a temple and town in Abydos, and another temple in Medamud.[11] 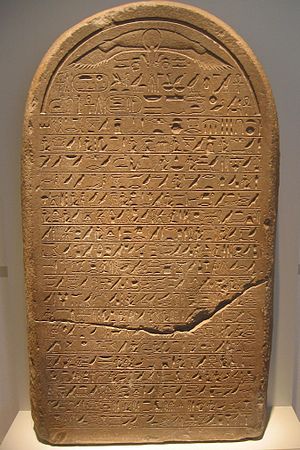 His pyramid was constructed at Dahshur.[12] A papyrus in the Berlin Museum shows Year 20 of his reign is equivalent to Year 1 of his son Amenemhat III. This means that he initiated a coregency with his son in this year. According to Josef W. Wegner, a Year 39 hieratic control note was recovered on a white limestone block from:

Wegner stresses that it is unlikely that Amenemhet III, Senusret's son and successor, would still be working on his father's temple nearly 4 decades into his own reign. He notes that the only possible solution for the block's existence here is that Senusret III had a 39-year reign, with the final 20 years in coregency with his son Amenemhet III. Since the project was associated with a project of Senusret III, his Regnal Year was presumably used to date the block, rather than Year 20 of Amenemhet III. This implies that Senusret was still alive in the first two decades of his son's reign.

Visually, Senusret III is known for his strikingly somber sculptures in which he appears careworn and grave.[14]

His court included the viziers Sobekemhat, Nebit and Khnumhotep. Ikhernofret worked as treasurer for the king at Abydos. Senankh cleared the canal at Sehel for the king. 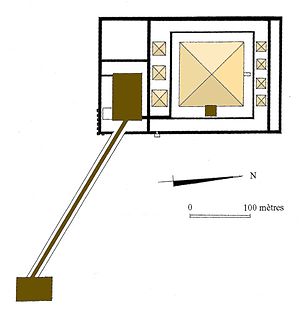 Plan of the Pyramid complex at Dashur

Senusret's pyramid complex was built north-east of the Red Pyramid of Dashur and in grandeur far surpassed those from the early 12th dynasty in size and underlying religious conceptions.

There has been speculation that Senusret was not necessarily buried there but rather in his sophisticated funerary complex in Abydos with his pyramid more likely to have been a cenotaph.[2]

Senusret's pyramid is 105 meter square and 78 meters high. The total volume was about 288,000 cubic meters. The pyramid was built of a core of mud bricks. They were not made a consistent size implying that standardized moulds weren't used. The burial chamber was lined with granite. Above the vaulted burial chamber was a second relieving chamber that was roofed with 5 pairs of limestone beams each weighing 30 tons. Above this was a third mudbrick vault.

The pyramid complex included a small mortuary temple and 7 smaller pyramids for his queens. There is also an underground gallery with further burials for royal women. Here were found the treasures of Sithathor and queen Mereret. There was also a southern temple, however this has since been destroyed.[15]

Many conservative biblical scholars consider Senusret the Pharaoh of Genesis 39-47 who elevated Joseph to a high administrative post answerable directly to him. [17]

Senusret III was the first pharaoh of the Nile Valley who had his features modeled in a realistic, rather than idealizing fashion. His predecessors, since the early Old Kingdom, were mainly shown with forceful, yet youthful traits. Senusret III was portrayed a careworn, hard man that shows the signs of age. [18]