Sequoyah County is a county located in the U.S. state of Oklahoma. As of the 2010 census, the population was 42,391.[1] The county seat is Sallisaw.[2] Sequoyah County was created in 1907 when Oklahoma became a state. It was named after Sequoyah, who created the Cherokee syllabary.[3]

Archaeological sites within the borders of the present county date to the Archaic Period (6000 BC to 1 AD). A slightly smaller number of sites date to the Plains Village Period (1000 to 1500 AD).[3] 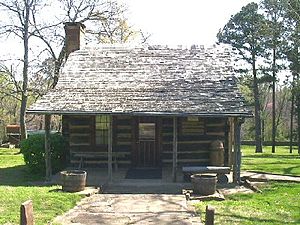 French traders came to this area in the 1700s, but Spain claimed the area until 1800, when France asserted control. The Louisiana Purchase passed control to the United States. The area was actually inhabited by the Osage Nation until 1816, when Lovely's Purchase occurred, allowing Western Cherokees to settle there before their compulsory removal. The area was then known as Lovely County, Arkansas Territory. However, the Cherokee were removed from Arkansas in 1829 and came to the present Sequoyah County. Sequoyah was among those who moved at the time, building a cabin that still stands. Dwight Mission was also moved to a site on Sallisaw Creek. It also still stands.[3] 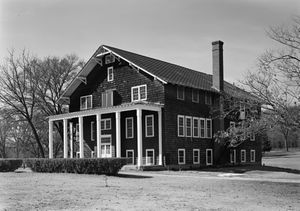 The Cherokee Nation established their first capital at a place they called Tahlonteskee (Tahlontuskey), near the present town of Gore, Oklahoma. Tahlonteskee remained the capital until 1839, when it was superseded by Talequah. It continued as a meeting place for "Old Settlers."[3]

This area, then known as the Sequoyah District became a hot bed of Confederate sympathizers during the Civil War. The only combat occurred when Stand Watie and his Confederate troops captured a Union steamboat on the Illinois River June 69, 1864.[3]

The county is divided between the Ozark Plateau in the north and the Ouachita Mountains in the south. The Cookson Hills are in the northwest part of the county. The Arkansas River forms the southern border. Other major waterways are the Illinois River and Robert S. Kerr Reservoir.[3]

Interstate 40 runs east and west through Sequoyah county. US-59 runs north and south through the county. 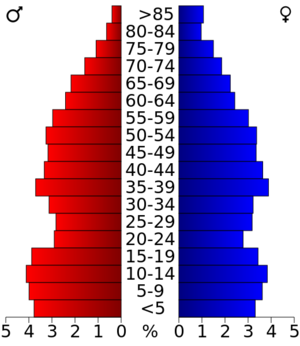 Age pyramid for Sequoyah County, Oklahoma, based on census 2000 data.

The county law enforcement is the Sequoyah County, Oklahoma Sheriff's Office. The department patrols all of the county's rural areas and provides at least three investigators in the department. The current sheriff is Ron Lockhart, a 21-year veteran of the Fort Smith, Arkansas police department.

The following sites in Sequoyah County are listed on the National Register of Historic Places: