Serge Klarsfeld (born 17 September 1935) and Beate Klarsfeld (née Künzel, born 13 February 1939) are activists and Nazi hunters known for documenting the Holocaust in order to establish the record and to enable the prosecution of war criminals. Since the 1960s, they have made notable efforts to commemorate the Jewish victims of German-occupied France, and have been supporters of Israel.

They helped found and have led the Sons and Daughters of Jewish Deportees from France (Association des fils et filles des déportés juifs de France) or FFDJF. It is one of the groups that has documented cases and located former German and French officials for prosecution such as Klaus Barbie, René Bousquet, Jean Leguay, Maurice Papon, and Paul Touvier, who have been implicated in the deaths of hundreds of thousands of French and foreign Jews during World War II. The Klarsfelds were among organized groups who filed cases decades after the war, sometimes as late as the 1990s, against such officials for their crimes against humanity.

In the 1960s, Beate Klarsfeld publicized the wartime activities of West German politicians; on one occasion, she slapped Chancellor Kiesinger in public in protest. After German reunification and the opening of the Stasi records of East Germany, in 2012 it was revealed that both Klarsfelds had been regular Stasi contacts during the 1960s. Beate had received material on the politicians and pay for her actions against West German leaders.

In the years before 1989 and the break-up of the Soviet Union, the Klarsfelds frequently protested against the Eastern Bloc's support for an independent Palestine and criticisms of Israel.

Recognition for their work has included France's Legion of Honour in 1984.[1] In 1986, their story was adapted as an American television movie starring Tom Conti, Farrah Fawcett, and Geraldine Page. In 2008, a French television movie was made about them.

In 2012, Die Linke ("The Left") nominated Beate Klarsfeld as a candidate for President of Germany in opposition to Joachim Gauck, a conservative and a Lutheran pastor from the former East Germany. Gauck was the consensus candidate and won overwhelmingly.[2]

On October 26, 2015, the UNESCO designate the Klarsfelds as "Honourary Ambassadors and Special Envoys for Education about the Holocaust and the Prevention of Genocide".[5]

Serge Klarsfeld was born in Bucharest to a family of Romanian Jews. They migrated to France before World War II began. In 1943, his father was arrested by the SS in Nice during a roundup ordered by Alois Brunner. Deported to the Auschwitz concentration camp, Klarsfeld's father died there. Young Serge was cared for in a home for Jewish children operated by the OSE (Œuvre de secours aux enfants)[6][not in citation given] organization; his mother and sister also survived the war in Vichy France, helped by the underground French Resistance beginning in late 1943.[5]

Beate was born Beate Künzel, the daughter of a Lutheran German family; her father served as a regular Wehrmacht soldier on the Eastern Front.[7] In 1960, she went to Paris to work as an au pair, where she began to learn more about the Holocaust. Later she worked for the de (Deutsch-Französisches Jugendwerk) (Franco-German Alliance for Youth).

Serge and Beate married in 1963 and settled in Paris. Their son, fr (Arno Klarsfeld) (born 1965), became a human rights attorney. He worked for Nicolas Sarkozy while he was minister of the interior.

In 1966 Beate was fired from her job at the Deutsch-Französisches Jugendwerk (Franco-German Alliance for Youth), because of her campaign against the West German Chancellor, Kurt Georg Kiesinger, for his work during World War II in the foreign ministry's radio propaganda department. A few years later, she attracted broad media attention in 1969 after she was criminally convicted in West Germany for having slapped Chancellor Kiesinger the previous year. She was sentenced to one year in prison, but her term was reduced to four months.[8]

In 2012 the archivist of the Stasi revealed that Klarsfeld's attack on the chancellor was carried out in agreement with and the support of the government of East Germany, which was conducting a campaign against West German politicians (see Braunbuch).[9][10] Beate Klarsfeld was paid 2,000 DM by the Stasi for her actions.[11][12] Both Serge and Beate Klarsfeld were revealed to have been regular Stasi contacts.[13] According to the State Commissioner for the Stasi Archives of Saxony, they cooperated with the Stasi in the 1960s in blackmailing West German politicians for World War II activities.[14]

Governments reacted to her charges of anti-Semitism. In August 1970, Beate was arrested in Warsaw and deported by Polish authorities for having protested against what she called Polish state antisemitism.[citation needed] She was accused of being a German spy trying to cause disruption in the People's Republic of Poland.[citation needed] In 1971, the German Democratic Republic prohibited her entry after she protested against the Czechoslovak government for its alleged anti-Semitism.[15]

In 1974, Serge and Beate Klarsfeld were both convicted in West Germany on felony charges of attempted kidnapping of Kurt Lischka, a former Gestapo chief, in Cologne in order to transport him to France for prosecution. After conviction of felony charges, they were each sentenced to two months in prison.[16] (His prosecution in Germany was prevented by legal technicalities resulting from a prior conviction). Following international protests, the sentence was suspended. Activism by the Klarsfelds and by descendants of Lischka's victims eventually resulted in changes to the laws. In 1980, Lischka was convicted of a felony in West Germany and sentenced to prison. 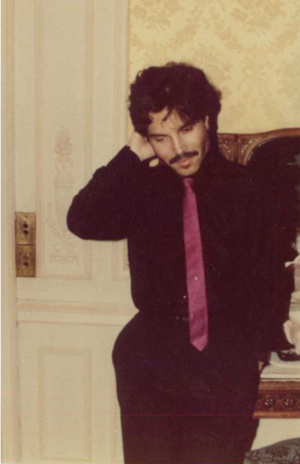 Gerald Posner in Paris, 1980, at the fr (Hôtel Raphael) to meet with Serge and Beate Klarsfeld

Klarsfeld resumed contact with the Stasi in the 1980s while trying to track down war criminals.[13] She has been arrested for her activities in pursuit of war criminals in Poland, Czechoslovakia, Bolivia,[17] Chile,[18] and Syria.[19]

The Klarsfelds' activities and methods generated controversy. On 9 July 1979, the Klarsfelds were the targets of car bombing at their home in France. No one was in the car when the bomb detonated, and no one was injured in the vicinity of the blast. Individuals purporting to represent the Nazi ODESSA claimed responsibility for the attack.

They are notable in the postwar decades for having been involved in hunting and finding German Nazis and French Vichy officials responsible for the worst abuses of the Holocaust, in order to prosecute them for alleged war crimes. Several officials were indicted due in part to the work of the Klarsfelds; they included the following, with the years of their convictions or deaths in parentheses:

In the 1970s the Klarsfelds considered kidnapping Barbie in much the same way the Mossad did Eichmann but the plan fell through. They decided instead to bring international pressure to force his extradition.

By 1995, only four senior French Vichy officials had been indicted for war crimes, and by that year, only Paul Touvier had stood trial.[20] Like Touvier, the former Vichy official Maurice Papon was convicted of war crimes in 1998.

In 1991 Beate Klarsfeld was arrested and deported from Syria after she spoke out in Damascus against the government's harboring of Alois Brunner, another former Nazi official accused of war crimes.[21] As commander of the Drancy internment camp outside Paris from June 1943 to August 1944, he directed the round-up and transport of some 140,000 European Jews to the Nazi gas chambers in eastern Europe. Most were killed. In 2001 Brunner was condemned in absentia in France to a life sentence for crimes against humanity.

In 1996, during the warfare in the former Yugoslavia, the Klarsfelds joined the outcry against Radovan Karadžić and Ratko Mladić for alleged war crimes and genocide of Bosnian Muslims.

In December 2009, Serge Klarsfeld defied an existing consensus within the Jewish community by saying that the beatification of Pope Pius XII was an internal matter of the Church. He said that Jews should not get too involved in the process.[22] Many Jews were protesting the beatification, as they said that Pius XII had contributed to the persecution of Jews throughout Europe, and had not brought the power of the church against the Nazis for their mistreatment of Jews and other persecuted peoples.

In France in 1979 the Klarsfelds created l'Association des fils et filles des déportés juifs de France (Association of the sons and daughters of Jews deported from France) or FFDJF. It defends the cause of the descendants of deportees, to have the events recognized and to prosecute people responsible. In 1981, the association commissioned a memorial in Israel to the deported French Jews; it bears the name, date and place of birth of 80,000 French victims of the Nazi extermination. About 80,000 trees were planted to shape a forest of remembrance. Serge Klarsfeld is also Vice-President of the Fondation pour la Mémoire de la Shoah.

In 1989 FFDJF was one of the groups to file a case against René Bousquet, head of the French Police in the Vichy government, for crimes against humanity. He was indicted by the French government in 1991, but killed in 1993 shortly before his trial was to begin.

The Klarsfelds' work on behalf of the descendants of Jewish deportees was formally recognized by President Jacques Chirac in a 1995 speech.[23] He acknowledged the nation's responsibility for the fate of Jews in its territory during the Second World War. The government passed a law on 13 July 2000 to establish compensation for orphans whose parents were victims of anti-Semitic persecution.

In January 2012, the Klarsfelds, along with prominent French-Armenian singer Charles Aznavour, director Robert Guédiguian, and philosophers Bernard-Henri Lévy and Michel Onfray, signed an appeal to the French Parliament to ratify a bill to establish penalties for people who deny the Armenian Genocide.[26][27]

Cooperation with the Stasi

Since the reunification of Germany and the opening of Stasi files, in 2012 Lutz Rathenow, the State Commissioner for the Stasi Archives of Saxony, has stated that Beate Klarsfeld cooperated with the Stasi of East Germany in the 1960s. They gave her material containing incriminating information about the wartime activities of West German politicians.[28][29] The cooperation of both Beate and Serge Klarsfeld with the Stasi and their status as contacts was also documented in a new book by former Stasi officers, Günter Bohnsack and Herbert Brehmer.[13]

In 2012 Beate Klarsfeld admitted to having received 2,000 DM from the SED, the governing party of East Germany, after her confrontation with Kiesinger in the 1960s, but said that she did not take orders from East Germany. She said she has also cooperated with the French, Israeli and US governments in hunting for German criminals.[30] 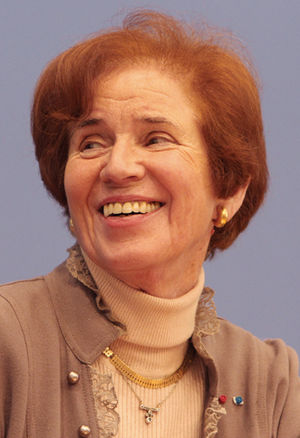 In 2012, The Left nominated Beate Klarsfeld as its presidential candidate after the CDU/CSU, FDP, SPD, and the Greens agreed on human rights activist Joachim Gauck as a consensus candidate.

Some factions of The Left, particularly supporters of Oskar Lafontaine, are critical of Klarsfeld's Zionism.[34] The newspaper Junge Welt, affiliated with Die Linke, criticised Klarsfeld for being a "warmonger" and "aggressive Zionist apologist."[35]

In Germany, presidential candidates are usually invited to present themselves to all factions in the Bundestag prior to voting. But, the CDU/CSU, the FDP and the SPD rejected Die Linke's request that Klarsfeld be allowed to meet with their factions.[36][37] On March 18, 2012 Beate Klarsfeld won 126 votes; 991 were cast in favour of Joachim Gauck.[38] In May 2015, Beate Klarsfeld and her husband Serge received the Federal Cross of Merit, in honor of their efforts to bring Nazi war criminals to justice.

The 2001 Documentary "Marlene Dietrich: Her Own Song" a Turner Classic Movies Production about Dietrich mentioning her support of Klarsfeld's anti-Nazi activities.

Bibliography of works in English