Sergei Uasyl-ipa Bagapsh (Abkhaz: Сергеи Уасыл-иҧа Багаҧшь, Georgian: სერგეი ბაგაფში, Russian: Сергей Васильевич Багапш; March 4, 1949 – May 29, 2011) was the second President of the Republic of Abkhazia. He was Prime Minister from 1997 to 1999 and was later elected as President in 2005. He was re-elected in the 2009 presidential election. He died on May 29, 2011, at the age of 62, from complications of surgery.

Sergei Bagapsh was born on March 4, 1949 at Sukhumi in the Georgian SSR. Throughout most of his life, he had lived in Abkhazia.[2] In his youth, Bagapsh was a member of the Georgian basketball team.[3] Bagapsh graduated from the Georgian State University of Subtropical Agriculture in Sukhumi. During his studies he worked first, in a wine cooperative and later as a security guard for the state bank. In 1972, he fulfilled his military service, worked as the head of a sovkhoz following which he became instructor with the Abkhazian regional committee of the Komsomol. In 1978, Bagapsh became responsible for information in the central committee of the Komsomol's Georgian branch and in 1980, first secretary of the Abkhazian regional committee. In 1982, Sergei Bagapsh became secretary general of the communist party in the Ochamchira district. After the fall of communism, Bagapsh became a businessman and the representative of the Abkhazian government in Moscow.[2] From 1995 until 1997, Bagapsh was First Vice-Premier of Abkhazia. On 9 November 1995, Bagapsh was seriously wounded in an attack.[4]

Sergei Bagapsh was appointed to the office of Prime Minister of Abkhazia on April 29, 1997.

The Georgian-Abkhazian tensions during Bagapsh's term in office came to a height in May 1998, when the Tbilisi-based government deployed forces along the Abkhaz-Georgian border.[5] 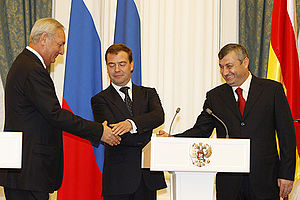 Sergei Bagapsh (on the left) with Dmitry Medvedev and Eduard Kokoity

From 2000 until 2004, Sergei Bagapsh was the managing director of the Abkhazian state-owned power company Chernomorenergo.[6] During the same period, he began to emerge as a likely opposition candidate in the lead-up to the 2004 presidential election. In early 2004, he became one of three leaders of the newly founded opposition party, United Abkhazia.[7] On July 20, 2004, United Abkhazia joined forces with Amtsakhara, another important opposition party, and the two named him as their joint candidate for the coming October presidential elections, beating out other hopefuls, such as former foreign minister Sergey Shamba. In the elections, Bagapsh and his main opponent, Raul Khadjimba, disputed the results. The Abkhaz Electoral Commission originally declared Khadjimba to be the winner, with Bagapsh a distant second, but the Supreme Court later found that Bagapsh had actually won with 50.3% of the vote. The court then reversed its decision when Khadjimba's supporters stormed the court building. At one point, Bagapsh and his supporters threatened to hold their own inauguration on December 6, 2004. However, in early December, Bagapsh and Khadjimba reached an agreement to run together on a national unity ticket. New elections were held on January 12, 2005, with this ticket easily winning. Under the agreement, Bagapsh ran for president and Khadjimba ran for vice-president.

Bagapsh first addressed the matter of his candidacy in the 12 December 2009 presidential election when during a press conference in Moscow on 18 April 2009 he announced that he would probably make use of his constitutional right to run for a second term.[8] Bagapsh was nominated on 27 October by United Abkhazia, with Prime Minister Alexander Ankvab of Aitaira as his Vice Presidential candidate.[9] On November 18, Bagapsh received the additional support of the Communist Party of Abkhazia.[10] 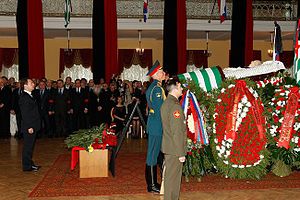 Russian President Dmitry Medvedev pays his respects to Bagapsh at a service in Moscow on 30 May 2011.

In May 2011, Bagapsh was diagnosed with growths[clarification needed] on his lung. On 21 May, Bagapsh underwent surgery in a Moscow clinic. Though the growths were successfully removed, Bagapsh died on May 29 due to heart failure that resulted from complications[clarification needed] from the surgery.[11][12] After the surgery, doctors discovered he had cancer.[13] Alexander Ankvab took over as acting president with an election scheduled to be held on 26 August.

Russian President Dmitry Medvedev offered his condolences saying: "Bagapsh was a loyal supporter of friendship and alliance with Russia, and he tirelessly worked to deepen close bilateral ties between our countries."[13]

A state commission was installed to perpetuate the memory of Sergei Bagapsh. On 26 January 2012, the City Council of Sukhumi unanimously accepted a proposal by Mayor Alias Labakhua to rename the Square of the Constitution of the USSR after Bagapsh.[15]