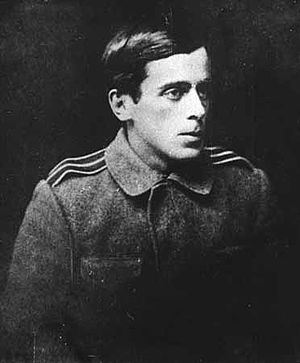 Sergei Yakovlevich Efron (Russian: Серге́й Я́ковлевич Эфро́н; 8 October 1893 – 16 October 1941), nicknamed Seryozha, was a Russian poet, officer of White Army and husband of Marina Tsvetaeva. While in emigration, he was recruited by the Soviet NKVD.[1] After returning to USSR from France, he was executed.

Sergei was born in Moscow. He was the sixth of nine children born to Elizaveta Durnovo (1853–1910) and Yakov Konstantinovich Efron (1854–1909). Both were Russian revolutionaries and members of the Black Repartition. Yakov worked as an insurance agent and died of cancer in 1909. The following year Elizaveta found one of her sons had committed suicide and soon after that day, killed herself. Yakov was from a Jewish family, while Elizaveta came from a line of Russian nobility and merchants; Yakov converted to the Lutheran faith to marry Elizaveta.[2][3][4]

Efron contracted tuberculosis as a teenager and his mental and physical health was strained further upon learning of his mother's death. After becoming a student at Moscow University, Sergei volunteered for the military as a male nurse. Due to his poor health, though, he was unable to serve in that capacity. Instead, he enrolled in the officer cadet academy.[5]

When Efron was a 17-year-old cadet in the officers' academy, he met 19-year-old Marina Tsvetaeva on May 5, 1911 at Koktebel ("Blue Height"), a well-known Crimean haven for writers, poets and artists. They fell in love and were married in January, 1912. While they had an intense relationship, Tsvetaeva had affairs, such as those with Osip Mandelstam and poet Sofia Parnok.[5][6][7]

Tsvetaeva and her husband spent summers in the Crimea until the revolution. They had two daughters: Ariadna, or Alya (born 1912) and Irina (born 1917), and one son, Georgy.[3][8] 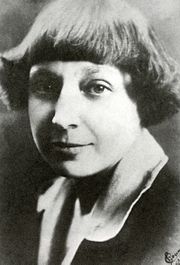 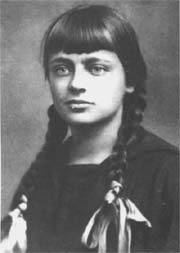 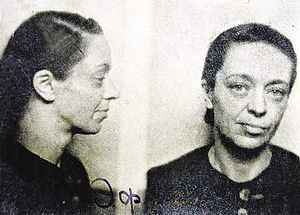 Efron volunteered for the military in 1914 and by 1917 he was an officer stationed in Moscow with the 56th Reserve.[6] In October 1917 he participated in the battles with the Bolsheviks in Moscow, then he joined the White Army and participated in the Ice March and defense of the Crimea,[9] while Marina returned to Moscow hoping to be reunited with her husband.[7] During that time, though, the relationship between Efron and Tsvetaeva was severely strained with very little communication between the two. Efron was particularly disenchanted with what he felt was a revolution largely unsupported by the Russian people, the expression of which inspired Tsvetaeva's Daybreak on the Rails.[5]

She was trapped in Moscow for five years, where there was a terrible famine. The Moscow famine was to exact a toll on Tsvetaeva. Starvation and worry were to erode her looks. With no immediate family to turn to, she had no way to support herself or her daughters. In 1919, she placed both her daughters in a state orphanage, mistakenly believing that she would be better fed there. Alya became ill and Tsvetaeva removed her but Irina died there of starvation in 1920.[7]

At the end of the revolution, Efron emigrated to Berlin.[10] There in May 1922, Efron was reunited in Berlin with his wife, Tsvetaeva, and daughter Ariadna who had left the Soviet Union.[11] In August 1922, the family moved to Prague. Living in unremitting poverty, unable to afford living accommodation in Prague itself, with Efron studying politics and sociology at the Charles University and living in hostels, Tsvetaeva and Ariadna found rooms in a village outside the city. She writes "we are devoured by coal, gas, the milkman, the baker...the only meat we eat is horse-meat".[8]

In summer 1924, Efron and Tsvetaeva left Prague for the suburbs, living for a while in Jíloviště, before moving on to Všenory, where Tsvetaeva conceived their son, Georgy, whom she was to later nickname 'Mur'.[8] He was a difficult child but Tsetaeva loved him obsessively. With Efron now rarely free from tuberculosis, their daughter Ariadna was relegated to the role of mother's helper and confidante, and consequently felt robbed of much of her childhood.[8]

In 1925, the family settled in Paris, where they would live for the next 14 years. During this time Tsvetaeva contracted tuberculosis.[11]

While in Paris, Efron was developing Soviet sympathies and was homesick for Russia.[11] He was afraid because of his past as a White soldier. Eventually, either out of idealism or to garner acceptance from the Communists, he began spying for the NKVD, the forerunner of the KGB, and in doing so was established in a dacha, a cabin in the country. Alya shared his views, and increasingly turned against her mother. In 1937, she returned to the Soviet Union. Later that year, Efron too had to return to USSR. In September 1937, the French police implicated him in the murder of the former Soviet agent and defector Ignace Reiss (also known as Ignaty Reyss and Ignatz Reiss), on a country lane near Lausanne, Switzerland.[10][11][12]

After defecting and then criticizing Stalin and Yezhov, Soviet spy Reiss promised not to reveal any state security secrets[13] and fled with his wife and child to the remote village of Finhaut, Valais canton, Switzerland, to hide. After they had been hiding for a month, they were contacted by Gertrude Schildbach at the instruction of Roland Lyudvigovich Abbiate, alias Francois Rossi, alias Vladimir Pravdin, codename LETCHIK ("Pilot"), a Russian expatriate, citizen of Monaco, and a Soviet NKVD agent. Schildbach was a German Communist refugee who was persuaded to write to Reiss to request a meeting and ask his advice. On September 4, 1937, Reiss agreed to meet Schildbach in Lausanne.[14][15] Reiss using the alias Eberhardt was lured by Gertrude Schildbach onto a side road near Lausanne where Roland Abbiate was waiting for him with a Soviet PPD-34 sub-machine gun.[16] Reiss was hit by fifteen bullets from Abbiate's sub-machine gun, killing him instantly.[17] The two then dumped Reiss's body on the side of the road.[14][18] Schildbach was never seen again.

Efron was said to have been in the car of the assassins.[11] He was also named as an NKVD boss and claimed to have had an “Union for Repatriation” office for recruiting NKVD operatives. A search of the office and Efron's flat yielded no evidence.[12]

After Efron's fled Paris, the police interrogated Tsvetaeva[11] at the Paris Surete Nationale headquarters on October 22, 1937.[19] She apparently seemed confused by their questions, answered somewhat incoherently, but is quoted as saying that in the month of September he had been fighting in the Spain and that "His trust might have been abused -- my trust in him remains unchanged." The police concluded that she was deranged and knew nothing of the murder.[11][19] In fact, Efron had return to Moscow under NKVD orders and was held under house arrest in a dacha until he was arrested on December 10, 1937.[19]

Later it was learned that Efron possibly had also taken part in the assassination of Lev Sedov in 1936. Some believe that Tsvetaeva did not seem to have known that her husband was a spy, nor the extent to which he was compromised.[11]

In 1939, Tsvetaeva and son Georgy returned to Moscow, unaware of the reception she would receive.[11] In Stalin's USSR, anyone who had lived abroad was suspect, as was anyone who had been among the intelligentsia before the Revolution.

Efron and Alya were arrested for espionage. Alya's fiancé, was actually an NKVD agent who had been assigned to spy on the family. Under torture Efron was pressed to give evidence against Tsvetaeva, but he refused to testify against her or anyone else.[20] His daughter, however, confessed under beatings that her father was a Trotskyite spy, which led to his execution.[5] Efron was shot in 1941; Alya served over eight years in prison.[11] Both were exonerated after Stalin's death.

In 1941, Tsvetaeva and her son were evacuated to Yelabuga. On 31 August 1941, while living in Yelabuga (Elabuga), Tsvetaeva hanged herself.[21] According to her son Georgy's diary, she visited NKVD office, where they probably tried to recruit her.[22]