Kovalyov was born in the town of Seredyna-Buda in Ukraine, near Sumy. In 1932, his family moved to Podlipki village near Moscow. In 1954, he graduated from Moscow State University. He was awarded a PhD in biophysics in 1964. As a biophysicist, Kovalyov authored more than 60 scientific publications. From mid-1950s, he opposed Trofim Lysenko's theories favored by the ruling Communist Party of the Soviet Union.

Kovalyov was one of a group of activists who set up the Action Group for the Defense of Human Rights in the USSR in 1969, the first such independent body in the Soviet Union.[1][2]:343 While the 14 members of the group and 38 supporters signed their Appeal to the UN Human Rights Commission a number of them were also becoming involved in the samizdat (self-published) human rights bulletin, the Chronicle of Current Events (1968–1983).[3] The members of the Action Group came under pressure from the authorities [4] and ceased their activities.

After the arrest of Pyotr Yakir the Chronicle did not appear for over a year. On 7 May 1974 Kovalyov, Tatyana Velikanova and Tatyana Khodorovich gave a press conference for foreign journalists, declaring their determination to renew publication of the bulletin and distributing three postponed issues.[7] As a consequence Sergei Kovalyov was arrested in Moscow later that year, on December 27, 1974,[8] tried in Vilnius, and charged with "anti-Soviet agitation and propaganda" (Article 70 of the RSFSR Penal Code).[9] He served seven years in penitentiary facilities for political prisoners — the labor camps in the Perm Region and Chistopol Prison — followed by three years of internal exile in Kolyma in the Soviet Far East. Upon his return, he settled in Kalinin (now Tver). He moved back to Moscow in 1987.

During perestroika initiated by Mikhail Gorbachev, Kovalyov was allowed to return to Moscow (in 1986). In that period, he continued his activism and participated in the founding of several key humanitarian organizations and initiatives:

In 1989, Andrei Sakharov recommended him as a co-director of the Project Group for defense of Human Rights, later renamed the Russian-American Human Rights Group. 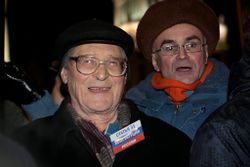 Kovalev at the Strategy-31 rally in defense of Article 31 (Freedom of assembly) of the Constitution of Russia. Moscow, 31 January 2010

After the dissolution of the Soviet Union, Kovalyov turned to official politics. In January 1991, he coauthored the Declaration of Human and Civil Rights in Russia and was a major contributor to Article 2 (Rights and Liberties of Man and Citizen) of the Constitution of the Russian Federation.

Since 1994, Kovalyov, then Yeltsin's human rights adviser, has been publicly opposed to Russia's military involvement in Chechnya, cooperating with the rebels and urging Russian soldiers to give up. From Grozny, he witnessed and reported the realities of the First Chechen War. His daily reports via telephone and on TV galvanized Russian public opinion against the war. For his activism, he was removed from his post in the Duma in 1995.[10] In 1994, he was awarded the Homo Homini Award for human rights activism by the Czech group People in Need.[11]

Sergei Kovalyov was accused by Russian General Troshev, that during the Battle of Grozny, Kovalyov offered Russian soldiers to surrender. He promised that their life, health and honor would be preserved. But most of those who gave up were killed.[12] However, Mr.Troshev is the only source of this information. Russian nationalist Alexander Prokhanov in his Zavtra newspaper also accused Kovalyov in mistreatment of soldier Yevgeny Rodionov mother, Lyubov Vasilievna. According to Prokhanov, she asked Kovalyov's help in finding her kidnapped and later killed son in 1996, but he roared in response: "Why did you come to me? You raised the murderer".[13]

Kovalyov has been an outspoken critic of authoritarian tendencies in the administrations of Boris Yeltsin and Vladimir Putin. In 1996, he resigned as head of Yeltsin's presidential human rights commission, having published an open letter to Yeltsin, where Kovalyov accused the president of giving up democratic principles. In 2002, he organized a public commission to investigate the 1999 Moscow apartment bombings (the Kovalyov Commission[14]), which was effectively paralyzed after one of its members, Sergei Yushenkov, was assassinated,[15][16] another member, Yuri Shchekochikhin, allegedly poisoned with thallium,[17][18] and its legal counsel and investigator, Mikhail Trepashkin, arrested.[19][20]

In 2005, he participated in They Chose Freedom, a four-part television documentary on the history of the Soviet dissident movement.

In March 2010, Kovalyov signed the on-line anti-Putin manifesto of the Russian opposition "Putin must go".

Kovalyov is a recipient of numerous awards and honorary titles. In 2004, he was awarded the Victor Gollancz Prize by the Society for Threatened Peoples, for documenting Russian crimes in Chechnya. In 2011, he was honored with the Lithuanian Freedom Award for his adherence to democratic values and ideals of freedom.[21][22]