Sergei Konstantinovich Krikalev (Russian: Серге́й Константинович Крикалёв, also transliterated as Sergei Krikalyov; born August 27, 1958) is a Russian cosmonaut and mechanical engineer. As a prominent rocket scientist, he is a veteran of six space flights and ranks second to Gennady Padalka for the amount of time in space: a total of 803 days, 9 hours, and 39 minutes. He retired from spaceflight in 2007 and is currently working as vice president of Space Corporation Energia.

After graduation in 1981, he joined NPO Energia, the Russian industrial organization responsible for manned space flight activities. He tested space flight equipment, developed space operations methods, and participated in ground control operations. When the Salyut 7 space station failed in 1985, he worked on the rescue mission team, developing procedures for docking with the uncontrolled station and repairing the station’s on-board system.

Krikalev was selected as a cosmonaut in 1985, completed his basic training in 1986, and, for a time, was assigned to the Buran Shuttle program. In early 1988, he began training for his first long-duration flight aboard the Mir space station.

This training included preparations for at least six EVAs (space walks), installation of a new module, the first test of the new Manned Maneuvering Unit (MMU), and the second joint Soviet-French science mission. Soyuz TM-7 was launched on November 26, 1988, with Krikalev as flight engineer, Commander Alexander Volkov, and French astronaut Jean-Loup Chrétien. The previous crew (Vladimir Titov, Musa Manarov, and Valeri Polyakov) remained on Mir for another 25 days, marking the longest period a six-person crew had been in orbit. After the previous crew returned to Earth, Krikalev, Polyakov, and Volkov continued to conduct experiments aboard the Mir station. Because arrival of the next crew had been delayed, they prepared the Mir for a period of unmanned operations before returning to Earth on April 27, 1989.

In April 1990, Krikalev began preparing for his second flight as a member of the backup crew for the eighth long-duration Mir mission, which also included five EVAs and a week of Soviet-Japanese operations. In December 1990, Krikalev began training for the ninth Mir mission which included training for ten EVAs. Soyuz TM-12 launched on May 19, 1991, with Krikalev as flight engineer, Commander Anatoly Artsebarsky, and British astronaut Helen Sharman. Sharman returned to Earth with the following crew after one week, while Krikalev and Artsebarsky remained on Mir. During the summer, they conducted six EVAs to perform a variety of experiments and some station maintenance tasks.

In July 1991, Krikalev agreed to stay on Mir as flight engineer for the next crew, scheduled to arrive in October because the next two planned flights had been reduced to one. The engineer slot on the Soyuz TM-13 flight on October 2, 1991, was filled by Toktar Aubakirov, an astronaut from the Soviet republic of Kazakhstan, who had not been trained for a long-duration mission. Both he and Franz Viehböck, the first Austrian astronaut, returned with Artsebarsky on 10 October 1991. Commander Alexander Volkov remained on board with Krikalev. After the crew replacement in October, Volkov and Krikalev continued Mir experiment operations and conducted another EVA before returning to Earth on March 25, 1992.

Throughout his various missions aboard Mir, Krikalev regularly communicated with various amateur HAM radio operators across the globe. A particularly lengthy relationship was formed between Krikalev and amateur HAM radio operator Margaret Laquinto. At one point during one of his stays in space, he contacted her once a day for an entire year. Krikalev and Laquinto successfully communicated via packet radio for the first time in history between an orbiting space station, and an amateur radio operator. They communicated about personal matters, as well as political ones. Laquinto set up a makeshift digital bulletin board that the Mir cosmonauts would often use to obtain uncensored western news and information regarding the state of the collapsing Soviet Union.[2]

Krikalev was in space when the Soviet Union was dissolved on December 26, 1991. These events are documented and contextualized in Romanian filmmaker Andrei Ujică's 1995 documentary Out of the Present.[3] A fictional account of how Krikalev may have felt about this is described in the song Casiopea, written by Cuban songwriter Silvio Rodríguez. 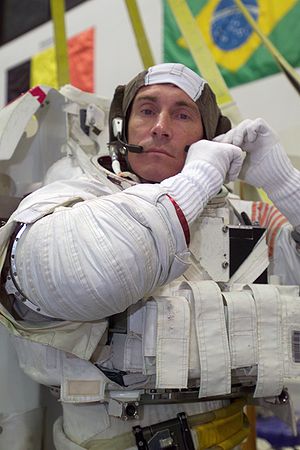 In October 1992, NASA announced that an experienced cosmonaut would fly aboard a future Space Shuttle mission. Krikalev was one of two candidates named by the Russian Space Agency for mission specialist training with the crew of STS-60. In April 1993, he was assigned as prime mission specialist. In September 1993, Vladimir Titov was selected to fly on STS-63 with Krikalev training as his back-up.

Krikalev flew on STS-60, the first joint U.S./Russian Space Shuttle Mission. Launched on February 3, 1994, STS-60 was the second flight of the Space Habitation Module-2 (Spacehab-2), and the first flight of the Wake Shield Facility (WSF-1). During the eight-day flight, the crew of Discovery conducted a wide variety of materials science experiments, both on the Wake Shield Facility and in the Spacehab, earth observation, and life science experiments. Krikalev conducted significant portions of the Remote Manipulator System (RMS) operations during the flight. Following 130 orbits of the Earth in 3,439,705 nautical miles (6,370,334 km), STS-60 landed at Kennedy Space Center, Florida, on 11 February 1994. With the completion of this flight, Krikalev logged an additional eight days, seven hours, nine minutes in space.

Krikalev returned to duty in Russia following his American experience on STS-60. Periodically he returned to the Johnson Space Center in Houston to work with CAPCOM in Mission Control and ground controllers in Russia supporting joint U.S./Russian Missions. To date he has supported STS-63, STS-71, STS-74 and STS-76.

Krikalev and Robert Cabana became the first people to enter the ISS in December, 1998, when they turned on the lights in the US module Unity. 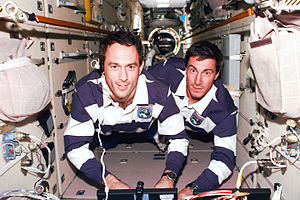 Sergei Krikalev with James H. Newman on the left during STS-88

Krikalev was a member of the Expedition 1 crew. They launched October 31, 2000, on a Soyuz rocket from Baikonur Cosmodrome in Kazakhstan, successfully docking with the station on November 2, 2000. During their stay on the station they prepared the inside of the orbital outpost for future crews. They also saw the station grow in size with the installation of the U.S. solar array structure and the U.S. Destiny Laboratory Module. They left the station with the STS-102 crew, undocking from the station on 18 March with landing at the Kennedy Space Center, Florida, on 21 March 2001.

Krikalev was also the Commander of Expedition 11. He lived and worked aboard the International Space Station on a six-month tour of duty. This was the third time he had flown to the International Space Station. Expedition 11 launched from Baikonur Cosmodrome in Kazakhstan on 14 April 2005 aboard a Soyuz spacecraft and docked with the ISS on 16 April 2005. Following 8 days of joint operations and handover briefings, they replaced the Expedition 10 crew who returned to earth aboard Soyuz. Expedition 11 plans called for two spacewalks, the first in August from the US Quest Airlock in US spacesuits, and the second, in September, in Russian spacesuits from the Pirs airlock. On August 16, 2005 at 1:44 a.m. EDT he passed the record of 748 days held by Sergei Avdeyev.[1]

In completing his sixth space flight, Krikalev has logged 803 days and 9 hours and 39 minutes in space, including eight EVAs. He is currently second to Gennady Padalka in the record for the most time spent in space.

Krikalev's contributions to the ISS were not limited to his on-orbit time. On June 15, 2007, it was Krikalev himself who was brought into the Russian Mission Control center to instruct Expedition 15 Flight Engineer Oleg Kotov in how he and ISS Commander Fyodor Yurchikhin could jump-start the Russian segment's crippled computer systems.

On February 15, 2007, Krikalev was appointed Vice President of the S.P. Korolev Rocket and Space Corporation Energia (Russian: Ракетно-космическая корпорация "Энергия" им. С.П.Королева) in charge of manned space flights. In that office, he is the administrator of the Yuri Gagarin Cosmonauts Training Center.

He was a member of the Russian and Soviet national aerobatic flying teams, and was Champion of Moscow in 1983, and Champion of the Soviet Union in 1986.

For his space flight experience, he was awarded:

He overtook Sergei Avdeyev's previous record for the career total time spent in space (747.59 days) during Expedition 11 to the International Space Station. Krikalev has logged a total of 803 days and 9 hours and 39 minutes in space.

On 23 May 2007 Sergei Krikalev was selected as an honorary citizen of Saint Petersburg together with conductor Valery Gergiev.

Krikalev was one of five cosmonauts selected to raise the Russian flag at the Sochi 2014 Winter Olympics opening ceremony.[4]