Recently his works have been adapted into film productions, for which he wrote the screenplays. He was also a blogger, keeping a blog at LiveJournal,[1] and posting both personal and public information or snippets of a book in progress. His first blog was discontinued on 11 July 2008 after a conflict with readers over the issue of foreign (American) adoptions of Russian children.[2][3] He started another blog a few days later, promising firmer moderation policies.[4] 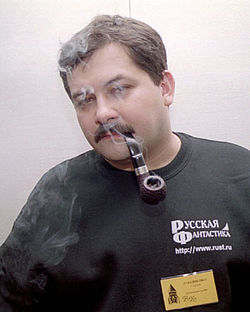 Lukyanenko was born in Karatau, Kazakhstan, then a part of the Soviet Union, to a Russian-Ukrainian father and a Tatar mother. After graduating from school, he moved to Alma-Ata, and enrolled at the Alma-Ata State Medical Institute in 1986 majoring in psychotherapy. After graduation in 1992, he worked at a hospital in Alma-Ata, specializing in child psychiatry, but soon abandoned his practice, as already poor Soviet physician wages plummeted with the fall of the Soviet Union, making it virtually impossible to support a family. He had started writing as a student, and had just started making money from it. During this time he became an active member in Russian fandom, visiting conventions and attending seminars all around the Soviet Union.

In 1993, he was appointed deputy editor at a local Science Fiction magazine, where he worked until 1996. This was one of the hardest periods of Sergei's life, as his family struggled to make ends meet. He often attributes the rather grim tones of his works to those financial and personal hardships. However, by the mid-90's the situation improved drastically, but soon his growing popularity as a writer made frequent trips to Russia increasingly burdensome. Thus, in 1996 Lukyanenko moved to Moscow, where he currently resides.

Sergei Lukyanenko met his future wife, Sonya, early in 1990, while still at university. He married her later the same year. She is a fellow psychologist, and she graduated from Kazakh state university. She now holds a Ph.D. degree in child psychology, and she taught psychology at the Russian State University for the Humanities until 2003. Their first son, Artemy Lukyanenko, was born in February 2004. Their second son, Daniil, was born 23 November 2007.

They also kept pet mice (the first one was called Stremitelny - Quick, and the next pair was Mulder and Scully) for some time, and their offspring were "awarded" to friends and fans. This became a running joke in Russian fandom. He still collects toy and souvenir mouse figures. They also own two Yorkshire Terriers named Busya and Varya.

Lukyanenko's name is romanized as Sergey Lukianenko on the English version of his official website[5] and as Sergei Lukyanenko by his publisher on works translated into English.[6] Other spellings such as Sergey Lukyanenko are also found.[7]

Lukyanenko started writing in the mid-80s, and his first publication, a short story Misconduct (not Where The Mean Enemy Lurks, as it was published later, although written earlier), followed soon in 1988. Science fiction was a risky business in Soviet Union, exposed to the whim of its political masters and often facing their wrath, as it was viewed chiefly as a political tool rather than an art, but at that time it was viewed somewhat benevolently, and he was able to jump the bandwagon of the state support, attending a number of literary seminars and publishing a bunch of novellas and short stories.

First works of this period shows clear influence of famous Russian children's author and teacher Vladislav Krapivin, a fan of whose Lukyanenko remains up to this day. These works, such as novella Eighth Color of Rainbow featured the same themes of coming of age, loyalty and friendship, as well as teenage protagonists and target audience. However, he soon moved from imitation to the polemic position towards Krapivin's somewhat idealistic views of children and their interaction. In the 1994 novel Knights of 40 islands Lukyanenko firmly established himself as an author of the Goldingian tradition.

However, the dissolution of Soviet Union and the switch to the market economy delivered a terrible blow to its literary community, as Russian authors now had to struggle with unfamiliar realities of a free publishing system. The hopes of a creative boom never materialized, as publishers were eager to exploit the lucrative pulp literature market (virtually nonexistent before) largely ignoring the existing literature establishment. This led to rather low confidence in domestic authors, and it was extremely hard to find a publisher ready to invest in a local writer.

However, Lukyanenko fared somewhat better than the others, already having made something of a name in Russian science-fiction circles. (For a discussion of the evolution of the Soviet science fiction field during these decades, see Patrick L. McGuire's review of Lukyanenko's Genome in The New York Review of Science Fiction.[8]) A nascent computer networks (mainly FidoNet), distributing electronic copies of his works, also helped to create demand for printed versions. Another contribution was his writing style, combining intricate but captivating plots with deep intrigue and concentrated action. Thus, when tides start to shift in mid-90s, Lukyanenko already was a well-known figure in Russian SF.

His books at the time included aforementioned Knights of the 40 Islands, Nuclear Dream collection of short stories and novellas, published in 1992, and two space opera trilogies: the unusual Line of Delirium, the setting of which was loosely based on that of the Master of Orion series of videogames, and the earlier Lord from Planet Earth, based on the rather dark setting brought forth in his early short stories (ironically called A Splendid Faraway Universe). His most striking and dark book, Autumn Visits, was also written during that time, when the author was struggling with depression.

The cult classic Labyrinth of Reflections, a book heavily based on various internet subcultures and cyberpunk mythos, is another product of this period. It is worth noting that although Labyrinth is often labeled as cyberpunk, it is a rather straight romance story, hardly meeting Dozois criterion, and more to the fact – was written when the author didn't even have an Internet connection: all his internet knowledge was limited to FIDONet membership.

A road to success

Exploiting the new fancy for domestic writers, Sergey moved from Kazakhstan to Moscow, marking the end of his early period. He continued to write there, now often venturing into literary experiments – like the religiously themed alternative history dilogy Seekers of Heaven, where he experimented with language stylization. He also continued several series started in his earlier period, and started several new ones (often in his favorite genre of space opera) – like the Genome series, now featuring two novels (Genome and Dances on the Snow) and the Cripples novella, or The Stars Are Cold Toys dilogy, sharing the same themes with David Brin's Uplift series.

One of the novels completed in the previous period finally brought a breakthrough to his career, taking it out of the "SF ghetto" and into the mainstream conscience. The novel Night Watch marked Lukyanenko's return to the fantasy genre, which he repeatedly visited during his career, but never ventured into seriously. Even in this novel he stayed in the less radical realm of urban fantasy; however, his gloomy but picturesque settings and vivid characters brought him a considerable success. He struck gold when improvements in the Russian economy permitted financing which revitalized a dormant domestic movie industry.

The 2004 film Night Watch (Nochnoy dozor), based on the book, was regarded as "the first Russian blockbuster." The film grossed over $16 million in Russia, a box office record at that time. In the United States, an adaptation of the film was released by Fox Searchlight.[9] The film Day Watch (Dnevnoy dozor) was released in Russia on January 1, 2006, and it was released in the US on June 1, 2007.[10]

The immense popularity of the movie transformed Lukyanenko from an author "widely known in narrow circles" of science fiction fans into an instant celebrity. He became the official "flagship" of Russian SF and since then has made a number of a public appearances in various TV shows and other venues. He also released a number of sequels to the Watch series. In addition to the sequels, he published a short story Kid Watch (Melkiy dozor) featuring a teenage agent of the Day Watch who is also the son of a member of the Russian counter-intelligence service which monitors the Others.

Since then, a number of other movie adaptations of his books have been considered. To date, only one of these projects, a 2005 children's film Asiris Nuna, based on a Today, Mother! a humor novella coauthored with Yuly Burkin, has been completed; several other movies, however, seem to remain in production. In many of these projects Lukyanenko acts as both scriptwriter and consultant.

In the meantime, several other books have been released by him, such as the deeply philosophical, non-series novel Spectrum which deals with the themes of existentialism and omnipotency, among others. He also published a closely connected series Rough Draft and Final Draft.

Until recently relatively few of Lukyanenko's works have been released outside of Russia, mostly in Baltic states, Bulgaria and Poland, countries with traditionally strong ties with Russian literature. Even fewer were commercially published in English, partly because Western publishers were apprehensive about the state of modern Russian copyright laws. However, success of the movies finally changed the situation. Night Watch, translated by Andrew Bromfield, was published in English in July 2006,[11][12][13] Day Watch followed in January 2007,[14][15] Twilight Watch was published in July 2007. 2009 saw the international publication of Last Watch by Hyperion Press.

Other foreign publication in major European and Asian languages appeared in the last two years, mostly brought to life by the success of the movies. These publications mostly centered around the Watch series, although other works are also being considered. Reviews of the books are generally positive.

Lukyanenko himself said that his work has been heavily influenced by that of Robert A. Heinlein,[citation needed] the Strugatsky brothers,[16] and Vladislav Krapivin,[16] and that he hopes to be remembered as a literary follower of the Strugatsky brothers. Although his books are often set in harsh worlds, Lukyanenko is a humanist writer, and in this sense believes he follows in the footsteps of the Strugatsky brothers. In May 2000, Boris Strugatsky referred to the spirit of the brothers' books as "that goodness with fists, those tortured attempts by the heroes to remain kind while being strong", and added "this is the underlying theme for Lukyanenko: how to preserve your goodness in the world of evil when you are strong and well-armed."[17]

Position on copyright and politics

Lukyanenko has been known as an avid supporter of copyright, as seen from many statements on his blog.[citation needed]

In November 2010 he carried out a study of sorts, asking his readers to donate a Russian ruble in exchange for a piece of his work that he would release freely. Only about 5% of the blog visitors responded casting some strong doubts on the feasibility of this sales model in Russia.[18]

On his website and in his blog Lukyanenko has repeatedly spoken out against the adoption of Russian orphans by foreigners, especially by Americans.[19] He welcomed the bill banning US adoption of Russian children.[20] This bill was adopted in response of Magnitsky Act.

Lukyanenko was critical of the Euromaidan movement, saying that what will follow it will be a forced Ukrainization, which is "as much of a crime as a forced sex change". Lukyanenko threatens authors who support the Euromaidan that he will make every effort to prevent their books being published in Russia.[21] He also forbade the translation of his books into Ukrainian.[22]

He welcomed the accession of the Crimea to the Russian Federation.[23]

Earlier Lukyanenko boycotted Denmark because of the culling of a giraffe at the Copenhagen Zoo.[24]