Sergei Parajanov (Armenian: Սերգեյ Փարաջանով; Russian: Серге́й Ио́сифович Параджа́нов; Georgian: სერგო ფარაჯანოვი; Ukrainian: Сергій Йо́сипович Параджа́нов; sometimes spelled Paradzhanov or Paradjanov; January 9, 1924 – July 20, 1990) was an Georgian Armenian film director and artist from the Soviet Union who made significant contributions to Ukrainian, Armenian and Georgian cinema.[1] He invented his own cinematic style, which was totally out of step with the guiding principles of socialist realism (the only sanctioned art style in the USSR). This, combined with his controversial lifestyle and behaviour, led Soviet authorities to repeatedly persecute and imprison him, and suppress his films.

Although he started professional film-making in 1954, Parajanov later disowned all the films he made before 1965 as "garbage". After directing Shadows of Forgotten Ancestors (renamed Wild Horses of Fire for most foreign distributions) Parajanov became something of an international celebrity and simultaneously a target of attacks from the system. Nearly all of his film projects and plans from 1965 to 1973 were banned, scrapped or closed by the Soviet film administrations, both local (in Kyiv and Yerevan) and federal (Goskino), almost without discussion, until he was finally arrested in late 1973 on charges of rape, homosexuality and bribery. He was imprisoned until 1977, despite a pleas for pardon from various artists. Even after his release (he was arrested for the third and last time in 1982) he was a persona non grata in Soviet cinema. It was not until the mid-1980s, when the political climate started to relax, that he could resume directing. Still, it required the help of influential Georgian actor Dodo Abashidze and other friends to have his last feature films greenlighted. His health seriously weakened by four years in labor camps and nine months in prison in Tbilisi, Parajanov died of lung cancer in 1990, at a time when, after almost 20 years of suppression, his films were being featured at foreign film festivals. In January 1988, he said in an interview, "Everyone knows that I have three Motherlands. I was born in Georgia, worked in Ukraine and I'm going to die in Armenia."[2] Sergei Parajanov is buried at Komitas Pantheon which is located in the city center of Yerevan. [3]

Parajanov was born Sarkis Hovsepi Parajaniants (Սարգիս Հովսեփի Փարաջանյանց) to artistically gifted Armenian parents, Iosif Paradjanov and Siranush Bejanova, in Tbilisi, Georgia. (The family name of Parajaniants is attested by a surviving historical document at the Sergei Parajanov Museum in Yerevan.)[4] He gained access to art from an early age. In 1945, he traveled to Moscow, enrolled in the directing department at the VGIK, one of the oldest and highly respected film schools in Europe, and studied under the tutelage of directors Igor Savchenko and Aleksandr Dovzhenko.

In 1948 he was convicted of homosexual acts (which were illegal at the time in the Soviet Union) with a MGB officer named Nikolai Mikava in Tbilisi. He was sentenced to five years in prison, but was released under an amnesty after three months.[5] In video interviews, friends and relatives contest the truthfulness of anything he was charged with. They speculate the punishment may have been a form of political retaliation for his rebellious views.

In 1950 Parajanov married his first wife, Nigyar Kerimova, in Moscow. She came from a Muslim Tatar family and converted to Eastern Orthodox Christianity to marry Parajanov. She was later murdered by her relatives because of her conversion. After her murder Parajanov left Russia for Kiev, Ukraine, where he produced a few documentaries (Dumka, Golden Hands, Natalia Uzhvy) and a handful of narrative films: Andriesh (based on a fairy tale by the Moldovan writer Emilian Bukov), The Top Guy (a kolkhoz musical), Ukrainian Rhapsody (a wartime melodrama), and Flower on the Stone (about a religious cult infiltrating a mining town in the Donets Basin). He became fluent in Ukrainian and married his second wife, Svitlana Ivanivna Shcherbatiuk, also known as Svetlana Sherbatiuk or Svetlana Parajanov, in 1956. Shcherbatiuk gave birth to a son, Suren, in 1958.[6]

Andrey Tarkovsky's first film Ivan's Childhood had an enormous impact on Parajanov's self-discovery as a filmmaker. Later the influence became mutual, and he and Tarkovsky became close friends. In 1965 Parajanov abandoned socialist realism and directed the poetic Shadows of Forgotten Ancestors, his first film over which he had complete creative control. It won numerous international awards and, unlike the subsequent The Color of Pomegranates, was relatively well received by the Soviet authorities. The Script Editorial Board at Goskino of Ukraine praised the film for “conveying the poetic quality and philosophical depth of M. Kotsiubynsky’s tale through the language of cinema,” and called it “a brilliant creative success of the Dovzhenko studio.” Moscow also agreed to Goskino of Ukraine's request to release the film with its original Ukrainian soundtrack intact, rather than redub the dialogue into Russian for Soviet-wide release, in order to preserve its Ukrainian flavor.[7] (Russian dubbing was standard practice at that time for non-Russian Soviet films when they were distributed outside the republic of origin.)

Parajanov departed Kiev shortly afterwards for his ancestors' homeland, Armenia. In 1969, he embarked on Sayat Nova, a film that many consider to be his crowning achievement, though it was shot under relatively poor conditions and had a very small budget.[8] Soviet censors intervened once again and immediately banned Sayat Nova for its allegedly inflammatory content. Parajanov re-edited his footage and renamed the film The Color of Pomegranates. Critic Alexei Korotyukov remarked: "Paradjanov made films not about how things are, but how they would have been had he been God."[citation needed] Mikhail Vartanov wrote in 1969 that "Besides the film language suggested by Griffith and Eisenstein, the world cinema has not discovered anything revolutionarily new until The Color of Pomegranates ...".[9] 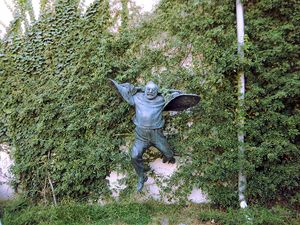 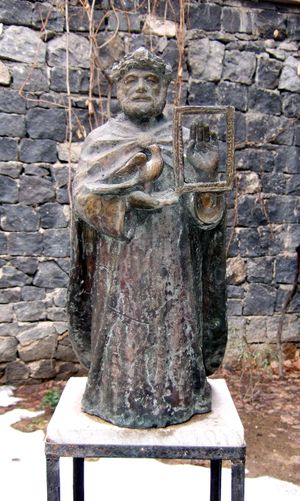 Parajanov's statue in front of his museum in Yerevan

By December 1973, the Soviet authorities had grown increasingly suspicious of Parajanov's perceived subversive proclivities, particularly his bisexuality, and sentenced him to five years in a hard labor camp in Siberia for "a rape of a Communist Party member, and the propagation of pornography."[10] Three days before Parajanov was sentenced, Andrei Tarkovsky wrote a letter to the Central Committee of the Communist Party of Ukraine, asserting that "In the last ten years Sergei Paradjanov has made only two films: Shadows of Our Forgotten Ancestors and The Colour of Pomegranates. They have influenced cinema first in Ukraine, second in this country as a whole, and third in the world at large. Artistically, there are few people in the entire world who could replace Paradjanov. He is guilty – guilty of his solitude. We are guilty of not thinking of him daily and of failing to discover the significance of a master." An eclectic group of artists, filmmakers and activists protested, to little avail, on behalf of Parajanov, among them Yves Saint Laurent, Françoise Sagan, Jean-Luc Godard, François Truffaut, Luis Buñuel, Federico Fellini, Michelangelo Antonioni, Andrei Tarkovsky and Mikhail Vartanov.

Parajanov served four years out of his five-year sentence, and later credited his early release to the efforts of the French Surrealist poet and novelist Louis Aragon, the Russian poet Elsa Triolet (Aragon's wife), and the American writer John Updike.[8] His early release was authorized by Leonid Brezhnev, General Secretary of the Communist Party of the Soviet Union, presumably as a consequence of the Brezhnev's chance meeting with Aragon and Triolet at the Bolshoi Theatre in Moscow. When asked by Brezhnev if he could be of any assistance, Aragon requested the release of Parajanov, which was effected by December 1977.[10]

While he was incarcerated, Parajanov produced a large number of miniature doll-like sculptures (some of which were lost) and some 800 drawings and collages, many of which were later displayed in Yerevan, where the Parajanov Museum is now permanently located.[11] (The museum, opened in 1991, a year after Parajanov’s death, hosts more than 200 works as well as furnishings from his home in Tbilisi.) His efforts in the camp were repeatedly compromised by prison guards, who deprived him of materials and called him mad, their cruelty only subsiding after a statement from Moscow admitted that "the director is very talented."[8]

After his return from prison to Tbilisi, the close watch of Soviet censors prevented Parajanov from continuing his cinematic pursuits and steered him towards the artistic outlets he had nurtured during his time in prison. He crafted extraordinarily intricate collages, created a large collection of abstract drawings and pursued numerous other avenues of non-cinematic art, sewing more dolls and some whimsical suits.

In February 1982 Parajanov was once again imprisoned, on charges of bribery, which happened to coincide with his return to Moscow for the premiere of a play commemorating Vladimir Vysotsky at the Taganka Theatre, and was effected with some degree of trickery. Despite another stiff sentence, he was freed in less than a year, with his health seriously weakened.[10]

In 1985, the slow thaw within the Soviet Union spurred Parajanov to resume his passion for cinema. With the encouragement of various Georgian intellectuals, he created the multi-award-winning film Legend of Suram Fortress, based on a novella by Daniel Chonkadze, his first return to cinema since Sayat Nova fifteen years earlier. In 1988, Parajanov made another multi-award-winning film, Ashik Kerib, based on a story by Mikhail Lermontov. It is the story of a wandering minstrel, set in the Azeri culture. Parajanov dedicated the film to his close friend Andrei Tarkovsky and "to all the children of the world".

Parajanov then attempted to complete his final project. He died of cancer in Yerevan, Armenia, on July 20, 1990, aged 66, leaving this final work, The Confession, unfinished. It survives in its original negative as Parajanov: The Last Spring, assembled by his close friend Mikhail Vartanov in 1992. Federico Fellini, Tonino Guerra, Francesco Rosi, Alberto Moravia, Giulietta Masina, Marcello Mastroianni and Bernardo Bertolucci were among those who publicly mourned his death.[9] They sent a telegram to Russia with the following statement: "The world of cinema has lost a magician".[9] 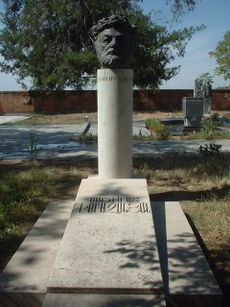 Despite having studied film at the VGIK, Parajanov discovered his artistic path only after seeing Andrei Tarkovsky's dreamlike first film Ivan's Childhood. Parajanov had many admirers of his art but his vision did not attract many followers. "Whoever tries to imitate me is lost", he reportedly said. [12] However, directors such as Theo Angelopoulos, Béla Tarr and Mohsen Makhmalbaf share Parajanov's approach to film as a primarily visual medium rather than as a narrative tool.[13]

The Parajanov-Vartanov Institute was established in Hollywood in 2010 to study, preserve and promote the artistic legacies of Sergei Parajanov and Mikhail Vartanov.[14]

Among his projects, there also were plans for adapting Longfellow's The Song of Hiawatha, Shakespeare's Hamlet, Goethe's Faust, the Old East Slavic poem The Tale of Igor's Campaign, but film scripts for these were never completed.

Parajanov's life story provides (quite loosely) the basis for the 2006 novel Stet by the American author James Chapman.

Selected bibliography of books and scholarly articles about Sergei Parajanov.