Sergey Aksyonov was born in Bălți in the Moldovan SSR on 26 November 1972. His father was the leader of a group called the Russian Community of Northern Moldova in Bălți.[2][3]

In 1989 he moved to Crimea and enrolled in a college for military engineers in Simferopol, however the fall of the Soviet Union occurred before he could graduate from the academy to become a Soviet Army officer. He then refused to swear an oath of allegiance to Ukraine, which he considered 'an unjustly severed appendage of Russia'.[2][4]

Sources have alleged that Aksyonov served in the mid 1990s as a lieutenant, or overseer, with the nickname "Goblin"[7][8][9][10][4] in the organized criminal gang "Salem".[11][4] Aksyonov's connection with the criminal world is acknowledged by the former chief of militsiya in Crimea Hennadiy Moskal (1997-2000). In 1995 some members of Salem had taken office as local deputies, receiving Legislative immunity.[12][13][14][15] “Aksyonov used to work side-by-side with another gang member, Serhiy Voronkov, in the early 1990s. Voronkov is a well-known mafia boss who was released from prison in 2008 and is still doing business in Crimea," said Andrei Yanitskiy, a journalist of Livy Bereh newspaper who investigated Aksyonov.[16] A native of Sevastopol,[17] Yanitskiy alleges that Aksyonov is still a member of the Salem gang.[16]

According to Mikhelson, Aksyonov started his criminal career in the gang "Greki" (Greeks)[4] that was created in Crimea by the Savopulo brothers,[4] and only later Aksyonov switched to more notorious "Salem".[4] In 1994 authorities were suspecting him and Aleksey Zhuk in the killing of Oleg Fenyuk through a contract.[4] Soon, however Greki were liquidated, yet unlike many others Aksyonov managed to survive.[4] The same Zhuk was killed 10 minutes after his phone talk with Aksyonov, which raised some suspicion among the former "partners".[4]

In January of 1996, Aksyonov was wounded after a Volvo in which he was riding overturned on the Simferopol-Moscow highway (

) during a shootout.[16][4] However, according to official documents the intended target was Samhan Mazahir-oglu Agaev (nickname "Sani").[4] Beside Agaev and Aksyonov, in the vehicle also were Aleksandr Bogomol and Pahrutdin Aliev.[4] The hit was conducted with automatic weapon by militants of the Greki gang Ruslan and Rusel from Yevpatoria who were driving a black Samara.[4] The hit was contracted by Ivan Savopulo.[4] Both Ruslan and Rusel were arrested on January 24, 1996, but soon were released due to lack of evidence.[4]

In 1997 chief of Bakhchysarai patrolling unit Berezhnoi claimed that Aksyonov, with a former Major of militsiya Vladimir Berenshtein ("Ben"), killed a chief of Crimea network of heat supply Kuzin and a director of alcoholic factory.[4] A HUBOZ operative stated that Aksyonov kept close relations with Sergei Voronkov ("Voronok") and the "godfather" of Salem Vyacheslav Sheviev[4] (leader of Party of Economic Revival). Coincidentally, members of the Party of Economic Revival were involved in establishing of the Azerbaijani separatist organization Nagorno-Karabakh Republic.

Around that time Aksyonov started to buy and stockpile weapons.[4] There is suspicion that the regional office of General Prosecutor of Ukraine received $60,000 to discontinue the investigation into the murder of Volodymyr Tykhonchuk.[4] Aksyonov also received all the assets of Agaev who was killed in spring of 1997.[4] By 1998 both Salem and Bashmaki had become the most powerful gangs in Crimea and the President of Ukraine was forced to send special operations units of militsiya and Security Service of Ukraine to restore order in the region.[4]

In 2010, Aksyonov sued Mikhail Bakharev, vice speaker of the Crimean parliament, for making statements of this kind. Although the court of the original jurisdiction ruled for Aksyonov and demanded that Bakharev publish a retraction, the decision was overturned by an appellate court which determined that there was no evidence to disprove the allegations.[18] Andriy Senchenko, a Crimean member of Verkhovna Rada from Batkivshchyna party alleged that Aksyonov was involved in these activities together with Supreme Council Chairman, Vladimir Konstantinov.[12][19][20][21] Senchenko alleges that “there were reports that he participated in the contract killing of (Volodymyr) Tykhonchuk [in 2004], then head of Crimean State Securities Commission, and before that in the killing of head of State Property Fund (Oleksiy) Golovizin [in 1997].”[16] Aksyonov was investigated by the police in both murders, but has never been prosecuted. Senchenko believes Aksyonov managed to evade criminal responsibility due to his connections on the peninsula.[16]

During an armed occupation of the Crimean parliament by Russian forces under his command, Aksyonov was voted into office following a vote of no confidence in the new Ukrainian government.[22][23][2] Already having well documented links to organized crime, since March 5, 2014 he has been wanted by the Ukrainian Security Service after being charged under Part 1 of Article 109 of the Criminal Code of Ukraine ("Actions aimed at the violent overthrow, change of constitutional order, or the seizure of state power").[24]

As a resident of Moldova, on 10 January 2003 Aksyonov was granted the Russian citizenship.[25]

His political career in Crimea started in 2008. In that year he became a member of "Russian Community of Crimea" ("Русская община Крыма") and a member of public organisation "Civic Asset of Crimea" ("Гражданский актив Крыма").

In 2008-2009, Aksyonov borrowed almost $5 million from Mykola Kirilchuk, a former Crimean minister of industry, to develop the Russian Unity party, Kirilchuk states. Kirilchuk has since fled Crimea and has been trying to get his money back though the court system since.[16] Since 2009 he has been a member of the board in Гражданский актив Крыма, co-president of Coordinating Council «За русское единство в Крыму!» ("For Russian Unity in Crimea!"), leader of All-Crimean public political movement Russian Unity ("Русское единство").[citation needed]

During a talk show (of the TV channel ATR) on 3 March 2012 Aksyonov stated about a possible accession of Crimea to Russia: "I think the time for this process has already passed. Today we live in Ukraine. I have an Ukrainian passport, Ukrainian citizenship, so all problems should be discussed only in friendly relations between our countries".[27] 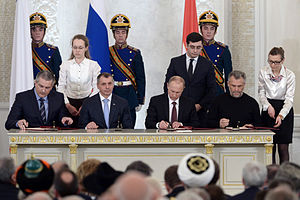 From left to right, Sergey Aksyonov, Vladimir Konstantinov, Vladimir Putin, and Aleksei Chaly sign the Treaty on the Adoption of the Republic of Crimea to Russia.

Following the Ukrainian revolution, on February 27 an emergency session was held in the Crimean legislature while it was occupied by armed Crimea’s self-defense forces.[2] After sealing the doors and confiscating all mobile phones, the MPs who had been invited by Aksyonov to enter the building, passed the motion in the presence of the gunmen armed with Kalashnikov's and rocket launchers.[2][16][28][29] The result was that 55 of 64 votes elected Aksyonov Prime Minister.[30] Various media accounts have disputed whether he was able to gather a quorum of 50 of his peers before the session convened that day, and some Crimean legislators who were registered as present have said they did not come near the building.[2] Others denied being in the city, and that duplicate voting cards stolen from parliament's safe were used in their name.[31] Opposition deputies have avoided speaking out publicly out of fear of reprisal, and due to threats received.[31] Crimean Prime Minister Anatolii Mohyliov was barred from attending the session.[31]

Under the Ukrainian constitution, the prime minister of Crimea is appointed by the autonomous republic's parliament following consultations with the president of Ukraine. The director of the information analysis department of the legislature's secretariat, Olha Sulnikova, has stated that an agreement exists with ousted president Viktor Yanukovych.[28] The interim president of Ukraine, Oleksandr Turchynov decreed the appointment of Aksyonov as the head of the government of Crimea to be unconstitutional.[32][33]

On March 5, 2014, the Shevchenko district court of Kiev issued a warrant for Aksyonov and Vladimir Konstantinov's arrest,[34] and the Security Service of Ukraine was charged to bring them to court.[34]

Due to the Crimean crisis he was put on the Canadian, the EU and the US[35] sanction lists, 17 March 2014. His assets in these countries were frozen, and Aksyonov was banned from entering these countries.

In the 2014 Crimean parliamentary election Aksyonov ran as a candidate for United Russia; because, according to himself, "The Popular Front" had delegated him to the United Russia party list.[36]

Aksyonov has promised that Ukrainian would cease to be an official language if Crimea joined Russia. “We use two languages on a daily basis – Russian and Crimean Tatar,” Aksyonov said. “It’s certain that the republic [of Crimea] will have two languages.”[29] Aksyonov's main goals for the immediate future of Crimea is to "use the funds, allocated for construction of infrastructures, for healthcare, energy and so on."[37] Aksyonov has also pushed for the Kerch Strait Bridge to be completed by 2018.[38]

Sergey Aksyonov has led efforts to stamp out dissent among ethnic Crimean Tatars over the annexation, saying “All activities aimed at non-recognition of Crimea’s joining to Russia and non-recognition of the leadership of the country will face prosecution under the law and we will take a very tough stance on this.”[39]

Aksyonov says homosexuals "have no chance" in Crimea, and that "we in Crimea do not need such people." He also promised that if gays tried to hold public gatherings, "our police and self-defense forces will react immediately and in three minutes will explain to them what kind of sexual orientation they should stick to."[40]