Sergey Viktorovich Lavrov (Russian: Серге́й Ви́кторович Лавро́в, pronounced [sʲɪrˈgʲej ˈvʲiktərəvʲɪtɕ lɐvˈrof]; born 21 March 1950) is a Russian diplomat and currently the Foreign Minister of Russia, incumbent since 2004.[1] His nomination to the Foreign Minister's office was approved by two Russian presidents, in 2008 by Dmitry Medvedev and in 2012 by Vladimir Putin.

Prior to that, Lavrov was a Soviet diplomat and Russia's ambassador to the United Nations from 1994 to 2004. Besides his native Russian, Lavrov speaks English, French, Sinhala and Dhivehi.[2]

Lavrov was born in Moscow on 21 March 1950[3] to an Armenian father and a Russian mother from Georgia.[4][5] His mother worked in the Soviet Ministry for Foreign Trade. Lavrov graduated from high school with a silver medal. Since his favorite class was physics, he planned to enter either the National Research Nuclear University or the Moscow Institute of Physics and Technology, but he entered the Moscow State Institute of International Relations (MGIMO) and graduated in 1972.[3] During his education at the MGIMO, Lavrov studied international relations. Soon he learned Sinhalese, then the only official language of Sri Lanka, as well as Dhivehi, the official language of the Maldives. Moreover, Lavrov learned English and French, but has stated that he is unable to speak the French language fluently.[citation needed] After he was admitted to the university, Lavrov, along with other students, was sent for a month to build the Ostankino Tower. During his summer vacations, Lavrov also worked in Khakassia, Tuva and the Russian Far East. Each semester Lavrov with his fellow students conducted drama performances, which were later presented on the main stage of the university. During the third year of his studies, Lavrov married.[6]

Lavrov graduated in 1972. As per the rules of that time, a graduate of the Moscow State Institute of International Relations had to work for the Foreign Ministry for a certain amount of time. Lavrov was employed in the Soviet embassy in Sri Lanka as an advisor, as he was already a specialist on the country. At the time, the Soviet Union and Sri Lanka had close market and economic cooperation and the Soviet Union launched the production of natural rubber in the country. The Soviet embassy in Sri Lanka also maintained relations with the Maldives. The embassy in Sri Lanka employed only 24 diplomats. Lavrov was given the task of continuously analysing the situation in the country, but he also worked as a translator, personal secretary and assistant for Rafiq Nishonov. In addition, he gained the diplomatic rank of an attaché.[6]

Section of the International Economic Relations and the U.N.

In 1976 Lavrov returned to Moscow. He worked as a third and second secretary in the Section for the International Economic Relations of the USSR. There he was involved in analytics and his office also worked with various international organizations including the United Nations. In 1981, he was sent as a senior adviser to the Soviet mission at the United Nations in New York City. In 1988 Lavrov returned to Moscow and was named Deputy Chief of the Section of the International Economic Relations of the USSR. Between 1990 and 1992 he worked as Director of the International Organization of the Soviet Foreign Ministry.[6] 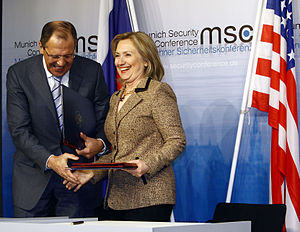 On 9 March 2004, President Vladimir Putin appointed Lavrov to the post of minister of foreign affairs.[3] He succeeded Igor Ivanov in the post. On 21 May 2012, Lavrov was reappointed foreign minister to the cabinet led by prime minister Dimitri Medvedev.[3]

Lavrov is regarded as continuing in the style of his predecessor: a brilliant diplomat but a civil servant rather than a politician. A Russian foreign policy expert at London's Chatham House, has described him as "a tough, reliable, extremely sophisticated negotiator", but adds that "he's not part of Putin's inner sanctum" and that the toughening of Russian foreign policy has got very little to do with him.[9] 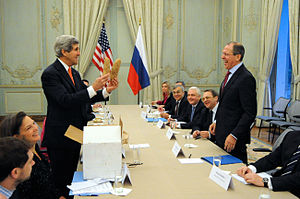 U.S. Secretary of State John Kerry and Lavrov before a bilateral meeting in Paris, on January 13, 2014

After the March 2014 referendum [11] of Crimea to Russia which,[12] and after the United Nations General Assembly vote had declared the results,[13] on 29 March Lavrov was interviewed over the crisis in Ukraine.[14] Here he proposed that Ukraine: be independent of any bloc, the Russian language be recognised officially; and that the constitution be organised along federal lines, amongst other things.[14] Lavrov noticed William Hague's newspaper article which described the initial sanctions regime in response to Russia's "outrageous land grab", "bullying" and which left them "face(ing) global isolation".[15] Lavrov reminded readers that the zero-sum "either-or" bloc-politics of Ukraine were first suggested in 2004 by Karel De Gucht, then Foreign Minister of Belgium.[14]

While visiting Kiev, Ukraine on March 22, Canadian Prime Minister Stephen Harper stated that he supports expelling Russia from the G8 and expects to discuss the potential expulsion with other G7 leaders at an upcoming meeting in The Hague.[16] On March 24, G8 leaders met formally in The Hague, without Russia being present, and voted to officially suspend Russia's membership in the G8. Russian Foreign Minister Lavrov stated earlier that day that the G8 was an informal organization and membership was optional for Russia.[17] Australian Foreign Minister Julie Bishop, as host of the then-next G20 meeting, proposed on 19 March 2014 to ban Russia over its role in the 2014 Crimean crisis.[18] She was reminded on 24 March by a communique of the BRICS foreign ministers, of whom Lavrov is one, that "The Ministers noted with concern, the recent media statement on the forthcoming G20 Summit to be held in Brisbane in November 2014. The custodianship of the G20 belongs to all Member States equally and no one Member State can unilaterally determine its nature and character."[19]

Lavrov was interviewed again on 30 March.[20] He described the meeting at the Nuclear Security Summit (NSS) in The Hague earlier that week. His NSS position was consistent with the one in his 29 March interview,[14] in which he spoke of the February 21 agreement with he signed along with Viktor Yanukovich, Vitaly Klitchko, Arseniy Yatsenyuk, and Oleg Tyagnibok as well as the Foreign Ministers of Poland, France and Germany to promote peaceful changes in Ukrainian power. Lavrov stressed federalism as a solution to the constitutional impasse in the Ukraine, and deplored the disofficialisation of the Russian language. He noticed the work of the secretariat of the Council of Europe at the Venice Commission to prevent a legitimation of the Crimean referendum, and to expel Russia. Lavrov was taken aback by what the U.S. President Barack Obama said about Russia being a regional power and about the costs they will have to pay. He claimed that hard-ball tactics were used by the U.S. at the U.N. to declare invalid the Crimean referendum.[21] Lavrov deplored the misuse of the Schengen Agreement to force Crimeans to visit Kiev in order to gain a Schengen visa, and noticed that the E.U. proposes a visa-free regime for Ukrainian citizens. The Russians surveilled the contacts of E.U. ambassadors with the Svoboda party and claimed that the Ukrainians appeared to be in violation of the ICAO agreement on respite of pilots. Lavrov was quoted as saying "I’m not so much surprised by the pettiness of those who have seized power in Ukraine. But the pettiness of their Western sponsors is amazing." Lavrov reiterated the three-part Russian proposal for the progress of Ukraine:

His subordinate in London, Ambassador Alexander Yakovenko, had on 28 March authored a piece in the Daily Telegraph which largely repeats the Russian three-point plan. Yakovenko remarked that the United States, United Kingdom, and Germany each have federalized systems, and suggests that Russian along with Ukrainian should be given an official language status while other languages will be granted a status in accordance with the European Charter for Regional or Minority Languages.[22]

The Kiev government on 30 March denounced Lavrov's proposals as amounting to “the complete capitulation of Ukraine, its dismemberment, and the destruction of Ukrainian statehood. (Lavrov)’s proposals for federalisation, a second official language, and referendums are viewed in Ukraine as nothing less than proof of Russia’s aggression. We sincerely regret that Minister S. Lavrov had to voice them,” said Foreign Minister Andrii Deshchytsia in a statement.[23] This position was repeated forcefully on 10 April in London's Daily Telegraph by Ambassador Volodymyr Khandogiy. Khandogiy asserted that "Ukraine always was – and, I’m convinced, will be – a unitary state. Kiev has unambiguously urged Moscow to avoid meddling in Ukraine’s internal affairs. Instead, the Russians offer an idea of federalisation aimed at destroying Ukraine," and concludes with an unfortunate Biblical reference to Matthew 7.[24] 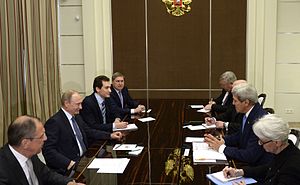 In a significant breakthrough toward the peaceful resolution of this conflict, the Prime Minister of the Ukraine, Arseniy Yatseniuk, on 11 April offered concessions to rebels in the city of Donetsk, thus addressing point #1 of the Lavrov proposal (see above) as follows. He told regional leaders and businessmen there that parliament should consider a “law on referendums … to allow regions to decide issues of key importance to them. Executive committees of each region will be handed all financial, economic, administrative and other powers so (that) they control their own territories, giving them the ability to develop these territories to attract investment and receive additional income for each region by amending the budget law of Ukraine. The central government is ready not only for dialogue with the regions, but to meet legal demands and wishes of every resident of the country.”[25]

Lavrov denied accusations that Russia is arming the pro-Russian separatists, "There are reasons to believe that they hear us on other aspects of Russian position regarding the crisis in Ukraine, but that doesn't mean that they immediately move to heed our calls."[26] Lavrov said the separatists want to "defend their culture, their traditions, celebrate their holidays rather than anniversaries of Roman Shukhevych and Stepan Bandera."[27]

He is a keen sportsman and a smoker.[9] Lavrov likes to watch football games on television,[28] is an ardent fan of the Moscow club Spartak, and a keen amateur footballer in his own right.[29] He has one daughter, Ekaterina, a graduate of Columbia University, who stayed in New York until 2014, when she was asked to come back to live in Moscow.[30] 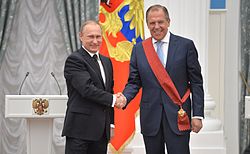 Russian President Vladimir Putin and Lavrov, awarded with the Order of Service to the Fatherland, 1st class, May 2015