Sergey Kuzhugetovich Shoygu (Russian: Серге́й Кужуге́тович Шойгу́, Tuvan: Сергей Күжүгет оглу Шойгу; born 21 May 1955) is a Russian politician who has served in the government of Russia as Minister of Defence since 2012. Previously he was Minister of Emergency Situations from 1991 to 2012 and briefly served as Governor of Moscow Oblast in 2012. He holds the military rank of General of the Army. He is also the President of the International Sport Federation of Firefighters and Rescuers.[1]

Shoygu was born in Chadan, Tuva, to a Tuvan father and a Russian mother.[2] During his youth, he acquired the nickname Shaitan (Satan), due to the various stunts he engaged in.[3] In 1977, Shoygu graduated from the Krasnoyarsk Polytechnic Institute with a degree in civil engineering. Following graduation in 1977, he worked in the construction projects worldwide for the next decade, advancing from low levels to become an executive. In 1988 he became a minor functionary in the Abakan branch of the Communist Party of the Soviet Union and then in Komsomol for a couple of years. In 1990 he moved to Moscow from Siberia and was appointed Deputy Chief of State Architecture and Construction Committee of the Russian Federation.[4]

In 1991, he was appointed the head of Rescuer Corps, which was later given more responsibilities and renamed first to the State Committee on Emergencies, and eventually to the Ministry of Emergency Situations, making Shoygu a government minister. He became popular because of his hands-on management style and high visibility during emergency situations, such as floods, earthquakes and acts of terrorism. In 1999 he became one of the leaders of the Russian pro-government party Unity. He was awarded Russia's most prestigious state award – Hero of the Russian Federation – in 1999. 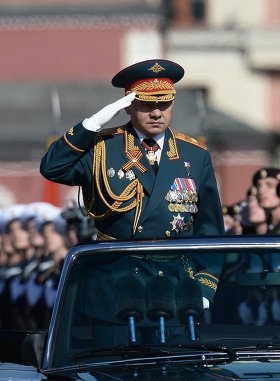 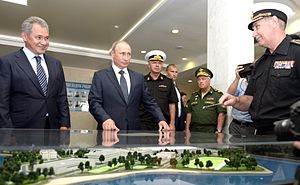 On 6 November 2012, Shoygu was appointed Minister of Defence[8] when Putin ousted his longtime ally, Anatoly Serdyukov. According to expert Sergey Smirnov, the so-called "Petersburg group” siloviki of Sergei Ivanov, Sergey Chemezov and Viktor Ivanov wanted one of its associates to take Serdyukov’s place at the Defense Ministry. But Putin didn’t want to strengthen them, so he took the neutral figure Shoygu.[9]

On 7 November 2012, the minister decided to resurrect the tradition of Suvorov and Nakhimov cadets participating in the 9 May parade. On July 2013 Shoygu ordered commanders to begin every morning in the barracks with a rendition of the Russian Anthem, to compile an obligatory military-patriotic book reading list and take the preparation of demob albums under their control.[10] On August that year he ordered to dress all Defense Ministry civilian workers, other staff and management employees in so-called "office suits".[11]

Shoygu stated on 26 February 2014 that Russia planned to sign agreements with Vietnam, Cuba, Venezuela, Nicaragua, the Seychelles, Singapore and several other countries either to house permanent military bases and/or to house airplane refuel stations in those countries.[12]

In July 2014 Ukraine opened a criminal case against Shoygu; he was accused of helping to form “illegal military groups” in Eastern Ukraine who at the time fought against the Ukrainian army.[13]

Sergey Shoygu is married to Irina Shoygu, and has two daughters (Yuliya, born 1977, and Kseniya, born 1991).[4] In his spare time, Shoygu enjoys sports such as football, horseback riding, and enjoys music of Vanessa Mae and The Ramones. He speaks nine languages,[citation needed] including English, Japanese, Chinese, and Turkish. He also has the largest collection of ancient samurai swords in Russia, worth over $40 million. 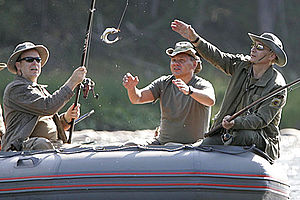 Shoygu with Vladimir Putin and Prince Albert in Tuva, 2007

Russian scientist Viktor Petrik attempted to use Shoygu's name to market his water filters. Shoygu has requested that Petrik cease using his name to market products.[14]

On 16 May 2011, Shoygu fired his personal driver because of the driver's threat to shoot a motorist made during a row on the Moscow Ring Road.[15]