From Infogalactic: the planetary knowledge core
Jump to: navigation, search
This name uses Eastern Slavic naming customs; the patronymic is Semyonovich and the family name is Sobyanin.

Sergey Semyonovich Sobyanin (Russian: Серге́й Семёнович Собя́нин; born 21 June 1958) is a Russian statesman and politician. He has served as Mayor of Moscow from October 2010 to 5 July 2013, and was re-elected Mayor on September 2013 city election.

Sobyanin previously served as the Governor of Tyumen Oblast (2001—2005), Deputy Prime Minister of Russia (2005-2008 in Mikhail Fradkov's Second Cabinet) and Head of the presidential administration (2008-2010). Sobyanin is a member of the ruling United Russia political party, and is elected to its higher governing bodies,[1] current member of presidium of Regional Council of the United Russia in Moscow[2] and the head (political council secretary) of the party’s Moscow branch from March 2011 to December 2012.[1][3]

He is considered to be a close ally to Russian billionaire businessman Vladimir Bogdanov, Director General of Surgutneftegaz.[4][5][6]

As the Mayor of Moscow, Sobyanin has gradually relaxed the massive construction projects of his predecessor, for which he has won acclaim for the "most sane piece of city planning in years."[7] As Mayor, Sobyanin created large mass media holding group of numbers TV and radio channels and newspapers, owned and controlled by Moscow Government.[8][9][10] And he has also won praise for his efforts in combatting corruption.[11] At the same time, Sobyanin was criticized for the banning of gay parades in the city, for which was strongly condemned by LGBT groups.[12]

Sergey Sobyanin was born in the village of Nyaksimvol in Russia's Polar North (then in the Russian SFSR of the Soviet Union).

After finishing a local school in Beryozovsky District in 1975, Sobyanin matriculated to the Kostroma Technology Institute in Kostroma. On graduation he received an assignment to the large tube-rolling factory in Chelyabinsk. Started working as a machinist there.

In 1984, he returned to Kogalym. There, he worked as a vice-chairman of the Kogalym selsovet (lowest level of administrative subdivision in rural areas), in a municipal economy department and local tax administration.[citation needed]

In 1989, he got a second degree in jurisprudence (All-Union Correspondence Institute of Law). His PhD thesis was titled "Legal position of the autonomous okrugs as federal subjects of Russia". On 23 May 2007, at the Institute of Legislation and Comparative Jurisprudence at Government of Russia, defence of Sobyanin's higher doctoral thesis "RF subject in economical and social development of the state" were to take place on the basis of his monograph published shortly before the event. But the defence was cancelled due to an unknown reason. Examination of Dissernet of Sobyanin's doctoral thesis and the monograph of 2007 exposed high level of plagiarism.[13][14] 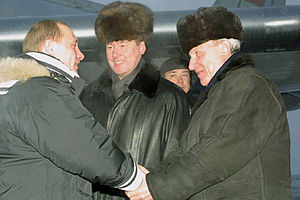 Since 1993, he has been the First Deputy of the Head of the Administration of the Khanty–Mansi Autonomous Okrug.

In 1994, he was elected chairman of the Khanty–Mansi Duma.

In January 1996, he became a member of the Federation Council of Russia.

Since July 1998, he has been chairman of the Constitutional Law, Judicial, and Legal Problems Committee.

On 27 October 1996, he was re-elected as a delegate and a chairman of the Khanty–Mansi Duma.

On 12 July 2000 he was appointed the First Deputy of Plenipotentiary of President of Russia in the Urals Federal District.

On 14 January 2001 he was elected governor of Tyumen Oblast. During the campaign, oil tycoon Vladimir Bogdanov was its confidant.[6]

He has been a member of the Supreme Council of the "United Russia" political party since 2004.

In 2005, Sergey Sobyanin sent a request to the President of Russia about a vote of confidence. That was done in case of the change of the governor assignment procedure. Vladimir Putin nominated him for election by the Duma of the Tyumen Oblast and he was finally reelected on 17 February 2005. 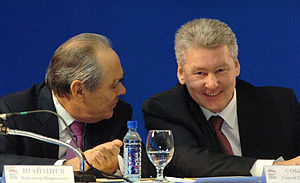 Tatarstan's President Mintimer Shaimiev and Sobyanin talk during the 7th congress of the United Russia in Yekaterinburg, 2006

In November 2005, he was appointed a head of the Administration of the President of Russia.

Laureate of the "2003 Russia's Man of the Year: Politician" prize.

Sobyanin has in recent years become a major target of controversy in the press. According to an independent poll, most Muscovites believe that since coming to power, Sobyanin's leadership has not differed from that of Yury Luzhkov.[15]

In February 2011, Sobyanin drew the ire of LGBT groups when he deemed Gay Parades to be "illegal" in Moscow.[16] In response to this act, several gays organised a parade without approval on May 2011, during which 30 gay supporters were arrested, including several foreigners. Actor Ian McKellen criticized Sobyanin for the ban on parades, even going as far as using the word "coward" to describe Sobyanin.[17]

The preservation organization Archnadzor criticized Sobyanin for his razing of historical landmarks to make way for contemporary buildings.[18] In March 2012, Sobyanin garnered controversy for doing little to clean up the city side walks.[19]

Sergey Sobyanin was married to Irina Sobyanina, a cousin of the Minister for Energy in Mikhail Kasyanov's Cabinet, ru. They divorced on 21 February 2014.[20]