Zhadan was born in Starobilsk, Luhansk Oblast in Ukraine. He graduated from Kharkiv University in 1996, then spent three years as a graduate student of philology. He taught Ukrainian and world literature from 2000 to 2004, and thereafter retired from teaching. He lives and works in Kharkiv.

In March 2008, the Russian translation of his novel Anarchy in the UKR made the short list of the National Bestseller Prize. It was also a contender for "Book of the Year" at the 2008 Moscow International Book Exhibition.

His novel Anthem of Democratic Youth has been adapted for the stage and is being performed at the Ivan Franko National Academic Drama Theater in Kyiv. 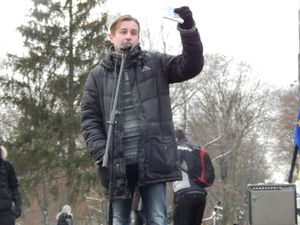 Serhiy Zhadan at "Rock for change" rally in Kharkiv, 2013

In 2013, he participated in Euromaidan demonstrations in Kharkiv.[1][2] In 2014, he was assaulted outside the administration building in Kharkiv.[3]

Zhadan collaborated with Kharkiv-based music band Luk. Most of Luk's Ukrainian-language songs included lyrics based on works by Zhadan (in particular the first album Tourist zone is based on Zhadan's play "Merry Christmas, Jesus Christ").

The tribute album Khor monholskykh militsioneriv (Mongol policemen choir) was released in 2008. The songs include lyrics by Zhadan, performed by Kharkiv musicians.

Rostislav Melnikov and Yuriy Tsaplin of the New Literary Review wrote in 2007:

Zhadan's prose is so poetic, his free verse so prosaic. It is difficult to assign a genre to his work: memoir, travelogue, timely or untimely meditation - or a mixture of all these, centered on the themes my generation and our epoch.[4]

There is no summarizing the spicy, hot, sweet, vicious improvisations of Serhiy Zhadan - this is verbal jazz. When you read him, you fear for contemporary Russian literature: of those now writing in the Russian language, there is none among them who is so infernally free (and above all, free from "writerly" prose, from the tendency to "produce an impression").[5]