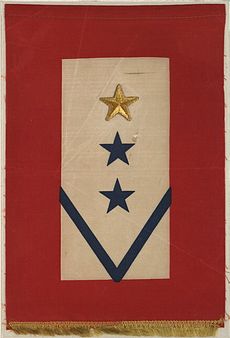 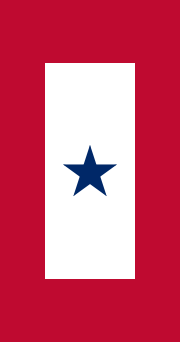 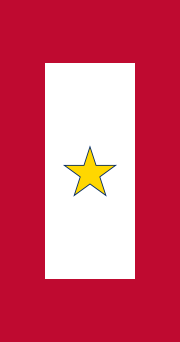 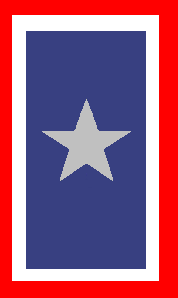 The banner was designed in 1917 by United States Army Captain Robert L. Queisser of the Fifth Ohio Infantry, in honor of his two sons who were serving in World War I.[2] It was quickly adopted by the public and by government officials. On September 24, 1917, an Ohio congressman read into the Congressional Record:

The mayor of Cleveland, the Chamber of Commerce and the Governor of Ohio have adopted this service flag. The world should know of those who give so much for liberty. The dearest thing in all the world to a father and mother – their children.[3]

These flags were first used in World War I, with subsequent standardization and codification by the end of World War II.[4] They were not popular during the Vietnam War, but have come back into use.[5] In modern usage, an organization may fly a service flag if one of its members is serving active duty.[6]

Manufacture of these flags are only by specific government license in the territories under American jurisdiction.[1] The same section of the United States Code that limits manufacture of the banner also mentions lapel pins. There is no legal specification of the banner's size, but according to the DoD code,[7] the flag size ratio must be 10:19, the same as the Flag of the United States. When displayed with the national flag, the latter should take the place of honor. If the flags displayed differ in size, the national flag should be larger.

Blue and gold are the only colors specified for use, but silver stars are increasingly in use to represent those discharged from service because of wounds or being invalided home.[8] The Silver Star Families of America is an organization attempting to encourage the U.S. Congress to make the Silver Star Service Banner official for those wounded or injured in a war zone. Forty-nine states, Guam, Saipan, the U.S. Virgin Islands, the Chickasaw Nation and over 2,700 cities and counties have issued proclamations in support of the Silver Star Banner and of Silver Star Service Banner Day on May 1 of every year.[9]

In World War II, the Brazilian Clube Militar (Military Club) and the Casino da Urca adopted the concepts of the American service banner by giving posters to the family members of the Brazilian Expeditionary Force. On these posters the phrase Daqui saiu um Expedicionário was written, which means "From here came an Expeditionary". Although the design differs from the American banners, the mothers of the Brazilian soldiers also received a pin prominently featuring a blue star similar to American pins.[11]

The individuals entitled to display the service flag are clearly defined in 36 USC § 901 which reads:

The U.S. Code also discusses the wearing of lapel pins.