The Seto Inland Sea (瀬戸内海, Seto Naikai?), often shortened to Inland Sea, is the body of water separating Honshū, Shikoku, and Kyūshū, three of the four main islands of Japan. It serves as a waterway, connecting the Pacific Ocean to the Sea of Japan. It connects to Osaka Bay and provides a sea transport link to industrial centers in the Kansai region, including Osaka and Kobe. Before the construction of the Sanyō Main Line, it was the main transportation link between Kansai and Kyūshū.

Yamaguchi, Hiroshima, Okayama, Hyōgo, Osaka, Kagawa, Ehime, Fukuoka, and Ōita prefectures all have coastlines on the Inland Sea; the cities of Hiroshima, Iwakuni, Takamatsu, and Matsuyama are also located on it.

The Inland Sea region is known for its moderate climate, with a stable year-round temperature and relatively low rainfall levels. The sea is also famous for its periodic red tides (赤潮, akashio?) caused by dense groupings of certain phytoplankton that result in the death of large numbers of fish.

Since the 1980s, its northern and southern shores have been connected by the three routes of the Honshū-Shikoku Bridge Project, including the Great Seto Bridge, which serves both railroad and automobile traffic.

The International Hydrographic Organization's definition of the limits of the Inland Sea (published in 1953) is as follows:[1]

On the East (Kii Suidô). A line running from Takura Saki (34°16'N) in Honsyû to Oishi Hana in the island of Awazi, through this island to Sio Saki (34°11'N) and on to Oiso Saki in Sikoku.

On the South (Bungo Suidô). A line joining Sada Misaki (33°20'N) in Sikoku and Seki Saki in Kyûsyû. 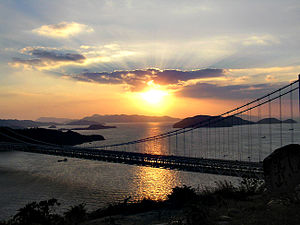 Sunset in Seto Inland Sea. The bridge on the foreground is the Great Seto Bridge in Kurashiki, Okayama Prefecture.

Each part of the Inland Sea has a separate name in Japanese. For example, Iyo-nada (伊予灘?) refers to the strait between Ehime, Yamaguchi, and Ōita prefectures in the western portion of the sea; Aki-nada (安芸灘?) is the open expanse west of the Geiyo Archipelago, near Hiroshima prefecture; and Suō-nada (周防灘?) refers to the expanse between Yamaguchi prefecture and Suō-Ōshima. There are also many straits located between the major islands, as well as a number of smaller ones that pass between islands or connect the Inland Sea to other seas or the Pacific.

Almost 3,000 islands are located in the Inland Sea, including the larger islands Awaji-shima and Shōdo-shima. Many of the smaller islands are uninhabited.

Over 500 marine species are known to live in the Inland Sea. Examples are the ayu, an amphidromous fish, the horseshoe crab, the finless porpoise, and the great white shark, which has occasionally attacked people in the Inland Sea. In old days, a lot of whales entered the sea to feed or breed, however due to whaling and pollution, they have totally disappeared from the Inland Sea, except for occasional lost individuals. 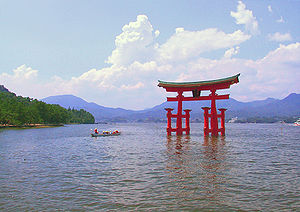 The torii of Itsukushima Shrine

It is believed that in the last ice age the sea level was lower than today. After the ice age, sea water poured into a basin between the Chūgoku mountains and Shikoku mountains and formed the Inland Sea as we know it today.

Due to the importance of water traffic, regional powers often had their own private navies. In many documents, these navies were called suigun (水軍?, lit. "water army"), or simply pirates. Sometimes they were considered to be public enemies, but in most cases they were granted the right to self-governance as a result of their strength.

In the 12th century, Taira no Kiyomori planned to move the capital from Kyoto to the coastal village of Fukuhara (today Kobe) to promote trade between Japan and the Song Dynasty of China. This transfer was unsuccessful, and soon after Kyoto became the capital again. Later, the Battle of Yashima took place off the coast of present-day Takamatsu.

During the feudal period, suigun seized power in most coastal areas. The Kono in Iyo province (today Ehime prefecture) and Kobayakawa (later Mori) in Aki province (today a part of Hiroshima prefecture) clans were two of the more famous suigun lords.

In the Edo period, the Inland Sea was one of the busiest transport lines in Japan. It was a part of a navigational route around Japan's islands via the Sea of Japan. Many ships navigated from its coastal areas to the area along the Sea of Japan. It was not only the main transport line between Kansai and Kyūshū, but also for Hokuriku, Tōhoku, and even Hokkaidō (which was called Ezo at the time). Major ports in the Edo period were Osaka, Sakai, Shimotsui, Ushimado, and Tomonoura. The Inland Sea also served many daimyo in the western area of Japan as their route to and from Edo, to fulfill their obligations under sankin-kōtai. Many used ships from Osaka. Thanks to transport through the Inland Sea, Osaka became the economic center of Japan. Each han had an office called Ozakayashiki in Osaka. These Ozakayashiki were among Japan's earliest forms of banks, facilitating domestic trade and helping to organize the income of the daimyo, which was in the form of koku, giant bales of rice.

The Inland Sea was also part of the official Chosendentsushi route, bringing Korean emissaries to the Shogunate.

After the Meiji Restoration, the coastal areas of the Inland Sea were rapidly industrialized. One of the headquarters of the Japanese Navy was built in the town of Kure. Since the Meiji period, development of land transport has been reducing the importance of the Inland Sea as a transport line. Remarkable land transportation innovations include the Sanyō Main Railroad Line in Honshū and the Yosan Main Railroad Line in Shikoku (both completed before World War II) and three series of bridges connecting Honshū and Shikoku (completed in the late 20th century). The Inland Sea is still used, however, by an international cargo transport line and several local transport lines connecting Honshū with Shikoku and Kyūshū.

The coastal area of the Inland Sea is one of the most industrialized sections of modern Japan. Besides Osaka, Kobe, and Hiroshima, some other major industrial cities are Kurashiki, Kure, Fukuyama, and Ube in Honshū, and Sakaide and Niihama in Shikoku. Innoshima is also known for its ship factory.

The main industries are steel production, ship construction, and since the 1960s, oil refining and oil-derived production.

Thanks to the moderate climate and beautiful landscape, fishing, agriculture, and tourism bring a lot of income to the area as well.[citation needed]

File:JapanInlandSeaBridges.PNG
Major ports and bridging Expressways of the Inland Sea.

Today the Inland Sea serves its coastal areas mainly for two purposes: first, international or domestic cargo transportation, and second, local transportation between coastal areas and islands on the sea. Major ports are Kobe, Okayama, Takamatsu, Tokushima, Matsuyama, and Hiroshima. Honshū and Shikoku have been connected by three series of bridges since the late 1980s. Those series of bridges, collectively known as the Honshū-Shikoku Bridge Project, are, from east to west, Akashi-Kaikyo Bridge, Great Seto Bridge, and Nishiseto Expressway. On the other hand, no bridge over the Inland Sea connects Kyūshū and another island.

Historically, the Inland Sea as transport line served four coastal areas: Kansai, Chūgoku, Shikoku, and eastern Kyūshū. The Inland Sea provided each of these regions with local transportation and connected each region to the others and far areas, including the coastal area of the Sea of Japan, Korea, and China. After Kobe port was founded in 1868 to serve foreign ships, the Inland Sea became a major international waterway with connection to the Pacific.

Due to the development of land transportation, the travel between east and west — that is, transportation within Shikoku, within Honshū, and between Honshū and Kyūshū — shifted to railroad and road transport. Two coastal railways, San'yō Main Line in Honshū and Yosan Main Line were built. Those railway lines stimulated the local economy and once invoked a rail mania. Many short railroads were planned to connect a certain station of those two lines and a local seaport on the Inland Sea, and some of them were actually built. The Ministry of Railroads, later the Japanese National Railways and then Shikoku Railway Company, ran some train ferry lines between Honshū and Shikoku including the line between Uno Station (Tamano) and Takamatsu Station (Takamatsu). When the Great Seto Bridge was finished and began to serve the two coastal areas, that ferry line was abolished.

The coastal area of the Inland Sea is one of the most famous tourist destinations in Japan. Even before Japan opened to foreigners in the middle of the 19th century, the sea's beauty was praised and introduced to the Western world by those who visited Japan, including Philipp Franz von Siebold, and after the country's opening, Ferdinand von Richthofen and Thomas Cook.

Its coastal area, except for Osaka prefecture and a part of Wakayama prefecture, was appointed the Setonaikai National Park (瀬戸内海国立公園, Setonaikai Kokuritsu kōen?) on March 16, 1934, as one of three oldest national parks in Japan.

Itsukushima Shrine, on the island of Itsukushima in the city of Hatsukaichi, is a UNESCO World Heritage Site and one of the most famous Japanese sites outside Tokyo and Kyoto. Shodoshima, nicknamed the "island of olives," and the Naruto whirlpools are two other well-known tourist sites. Neighboring locations like Kotohira and Okayama are often combined with the tour of the Inland Sea region. Some historic sites, including Yashima in Takamatsu and Kurashiki, also attract many visitors. Hiroshima is the neighbor city to Itsukushima Shrine and another UNESCO World Heritage Site because of atomic bomb damage in 1945.

Some sites along the Inland Sea were featured in eighth-century Japanese literature, both in prose and in verse, including Kojiki, Nihonshoki, and Man'yōshū. Since some sites were used as places of exile, their feeling and landscape were evoked in waka. In fiction, in The Tale of Genji, Genji fled from Kyoto and resided in Suma (now a part of Kobe) and Akashi for two years.

In medieval literature, because of the Genpei War, the Inland Sea is one of the important backgrounds of The Tale of the Heike, particularly in its latter part.

In the Western world, Donald Richie wrote a literary nonfiction travelogue called The Inland Sea relating a journey along the sea, beginning from the East at Himeji and ending at Miyajima in the West, close to Hiroshima, going from island to island, exploring the landscape, meeting and discussing with local people, as well as musing on Japanese culture, the nature of travel and of identity, and his own personal sense of identity. In 1991, filmmakers Lucille Carra and Brian Cotnoir produced a film version of Richie's book, which further explored the region through interviews and images photographed by Hiro Narita. Produced by Travelfilm Company and adapted by Carra, the film won numerous awards, including Best Documentary at the Hawaii International Film Festival (1991) and the Earthwatch Film Award. It screened at the Sundance Film Festival in 1992.[3]