Seven Days to the River Rhine 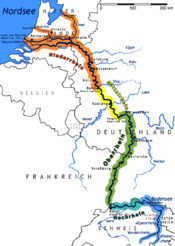 The Rhine is one of the most important rivers in Europe.

Seven Days to the River Rhine was a top-secret military simulation exercise developed in 1979 by the Warsaw Pact. It depicted the Soviet bloc's vision of a seven-day nuclear war between NATO and Warsaw Pact forces.[1][2][3]

This possible World War III scenario was released by the conservative Polish government following their election in 2005, in order to "draw a line under the country's Communist past", and "educate the Polish public about the old regime." [2][4][3]

Radosław Sikorski, the Polish defense minister as of 2005,[4] stated that documents associated with the former regime would be declassified and published through the Institute of National Remembrance in the coming year.[2][4]

The files being released would include documents about "Operation Danube", the 1968 Soviet invasion of Czechoslovakia.[2][5] They also included files on an army massacre of Polish workers in Szczecin in the 1970s, and from the martial law era of the 1980s.[2][4][3]

The Czechs[6] and Hungarians [7] declassified related documents in the 1990s, adding to this Cold War revelation.

The plans was premised on NATO launching a nuclear attack on the Vistula river valley in a first-strike scenario, which would prevent Soviet bloc commanders from sending reinforcements to East Germany to forestall a possible NATO invasion of that country.[2][4][3] The plan expected that as many as two million Polish civilians would die in such a war and Poland would be completely destroyed.[2][4][3]

A Soviet counter-strike would be launched against West Germany, Belgium, the Netherlands and Denmark .[2][3]

NATO initiating the conflict might have been a politically palatable cover, for what was an offensive plan. This is seen in many NATO and USSR war game scenarios.[8]

Maps associated with the released plan show nuclear strikes in many NATO states, but exclude both France and the United Kingdom. There are several possibilities for this lack of strikes, the most probable being that both France and the United Kingdom are nuclear weapons states, and as such retain nuclear arsenals that could be employed in retaliation for nuclear strikes against their nations.[2][3][9][6][10]

The French forces employed a nuclear strategy known as dissuasion du faible au fort (weak-to-strong deterrence); this is considered a "counter-value" strategy, which implies that a nuclear attack on France would be responded to by a strike on Russian cities. See Force de frappe for more information on the French conceptualization of nuclear warfare.[2][3]

The Guardian newspaper, however, speculates that "France would have escaped attack, possibly because it is not a member of NATO's integrated structure. Britain, which has always been at the heart of NATO, would also have been spared, suggesting Moscow wanted to stop at the Rhine to avoid overstretching its forces."[11][2][3]

There are many high-value targets in Britain (like RAF Fylingdales, RAF Mildenhall and RAF Lakenheath) that would then have to be struck in a conventional manner in this plan, though a nuclear strike would be far more effective (and, as the plans show, a preferable option for the Soviet leadership as shown by their strikes in Western Europe). The plan also indicates that USAF fighter-bombers, primarily the long-ranged F-111, would be employed in nuclear strikes, and that they would launch from those British bases.[2][3]

The Soviets planned to use about 7.5 megatons of atomic weaponry in all during such a conflict.[7]

Stuttgart, Munich and Nuremberg in Germany were to be destroyed by nuclear weapons and then captured by the Czechoslovakians and Hungarians. [6]

The Soviets planned to have reached Lyon by day nine and then pressed on to a final position at the Pyrenees.[6] The Czechoslovakians thought this was a bit overoptimistic at the time, and today's Western planners thought such a goal was completely unattainable.[6] There were also plans relating to a planned naval operation in the North Atlantic against NATO shipping.[4]