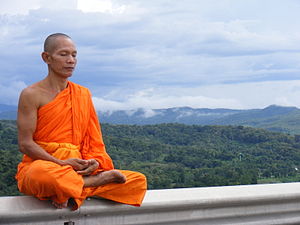 This evaluation of seven enlightenment factors is one of the "Seven Sets" of "Enlightenment-related states" (bodhipakkhiyadhamma).

The Pali word bojjhanga is a compound of bodhi ("enlightenment") and anga ("factor").[2]

According to one discourse in the Samyutta Nikaya entitled "Bhikkhu Sutta" (SN 46.5):

During meditation, one may contemplate the seven Factors of Enlightenment as well as on their antithesis, the Five Hindrances (sensual pleasure, ill-will, sloth-torpor, restlessness-worry, doubt).[5] In addition, one Samyutta Nikaya sutta identifies developing each of the enlightenment factors accompanied by each of the four brahma viharas (lovingkindness, compassion, sympathetic joy, equanimity).[6]

Again according to the Samyutta Nikaya, once when the Buddha was gravely ill he asked Venerable Mahacunda to recite the seven Factors of Enlightenment to him. In such a way the Buddha was cured of his illness.[8]

In the Visuddhimagga, in a section discussing skills needed for the attainment and maintenance of absorption (jhana), Buddhaghosa identifies the bojjhangas in the following fashion:

In Meditation everyone most likely experiences two of the five hindrances (Pāli: pañca nīvaraṇāni). They are sloth and torpor (Pāli: thīna-middha), which is half-hearted action with little or no collectedness and restlessness and worry (uddhacca-kukkucca), which is the inability to calm the mind.[citation needed]

As indicated above, in the "Fire Discourse" (SN 46.53), it is recommended that joy or rapture, investigation, and energy are to be developed when experiencing sloth and torpor. Relaxation, concentration, and equanimity are to be developed when experiencing restlessness or worry. Mindfulness should be constantly present to remain aware of physical change as well as mental change in either skillful or unskillful direction.[7]