From Infogalactic: the planetary knowledge core
Jump to: navigation, search
This article is about Ukraine's Wonders. For other Seven Wonders, see Wonders of the World (disambiguation). 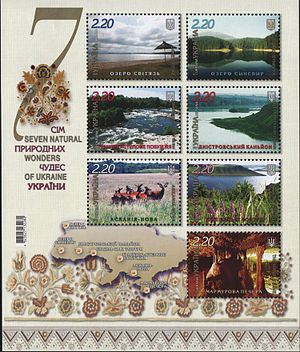 The Seven Natural Wonders of Ukraine (Ukrainian: Сім природніх чудес України, Sim pryrodnikh Tchudes Ukrainy) is the selection of the most popular and unique natural landmarks in Ukraine, as the second stage of the Seven Wonders of Ukraine national program. All seven sites are publicly owned protected areas of at least regional level, available for tourism.

Three objects from the nomination list needed a special nomination:

As for the original event of the Seven Wonders of Ukraine the local and provincial (oblast) authorities composed a list of 1,000 possible candidates. An expert council consisting of 100 people, including culturologists, historians, and tourist specialists, chose a list of 21 candidates from which people on the internet could vote.

The internet voting on the 21 possible candidates was opened on July 7, 2008, at the program's web-site. A total of around 77,000 internet users voted in the campaign. The voting was closed on August 26, 2008, and the results were officially announced on the same day. The whole campaign was initiated back in May 2007 by Mykola Tomenko a Ukrainian politician and the deputy of the Parliament of Ukraine of the fifth convocation.

Each manager of a winning nomination was awarded a statue of their candidate made out of green marble, matte steel, and gold-mirror acrylic paint.