Severo Ochoa was born in Luarca (Asturias), Spain. His father was Severo Manuel Ochoa, a lawyer and businessman, and his mother was Carmen de Albornoz. Ochoa was the nephew of Álvaro de Albornoz (President of the Second Spanish Republic that was exiled, 1947–1951), and a cousin of the poet and literary poet and critic Aurora de Albornoz. His father died when Ochoa was seven, and he and his mother moved to Málaga, where he attended elementary school through high school. His interest in biology was stimulated by the publications of the Spanish neurologist and Nobel laureate Santiago Ramón y Cajal. In 1923, he went to the University of Madrid Medical School, where he hoped to work with Cajal, but Cajal retired. He studied with father Pedro Arrupe, and Juan Negrín was his teacher.[citation needed]

Negrín encouraged Ochoa[citation needed] and another student, José Valdecasas, to isolate creatinine from urine. The two students succeeded and also developed a method to measure small levels of muscle creatinine. Ochoa spent the summer of 1927 in Glasgow working with D. Noel Paton on creatine metabolism improving his English skills. During the summer he refined the assay procedure further and upon returning to Spain he and Valdecasas submitted a paper describing the work to the Journal of Biological Chemistry, where it was rapidly accepted [Ochoa, S., and Valdecasas, J. G. (1929) A micromethod for the estimation of total creatinine in muscle. J. Biol. Chem. 81: 351–357], marking the beginning of Ochoa's biochemistry career.[2]

Ochoa completed his undergraduate medical degree in the summer of 1929 and developed an interest in going abroad to gain further research experience. His previous creatine and creatinine work led to an invitation to join Otto Meyerhof’s laboratory at the Kaiser Wilhelm Institute for Biology in Berlin-Dahlem in 1929. At that time the Institute was a "hot bed" of the rapidly evolving discipline of biochemistry, and thus Ochoa had the experience of meeting and interacting with scientists such as Otto Warburg, Carl Neuberg, Einar Lundsgaard, and Fritz Lipmann in addition to Meyerhof who had received the Nobel Prize in Physiology and Medicine less than a decade earlier.

In 1930 Ochoa returned to Madrid to complete research for his MD thesis, which he defended that year. In 1931, a newly minted MD, he married Carmen García Cobián, he did not have any children. He then began postdoctoral study at the London National Institute for Medical Research (NIMR), where he worked with Sir Henry Dale. His London research involved the enzyme glyoxalase and was an important departure in Ochoa's career in two respects. First, the work marked the beginning of Ochoa's lifelong interest in enzymes. Second, the project was at the cutting edge of the rapidly evolving study of intermediary metabolism.[3]

In 1933 the Ochoas returned to Madrid where he began to study glycolysis in heart muscle. Within two years, he was offered the directorship of the Physiology Section in a newly created Institute for Medical Research at the University of Madrid Medical School. Unfortunately the appointment was made just as the Spanish civil war erupted. Ochoa wisely decided that trying to perform research in such an environment would destroy forever his "chances of becoming a scientist." Thus, "after much thought, my wife and I decided to leave Spain." In September 1936 Severo and Carmen began what he later called the “wander years” as they traveled from Spain to Germany, to England, and ultimately to the United States within a span of four years.[3][4]

Ochoa left Spain and returned to Meyerhof's Kaiser Wilhelm Institute for Biology now relocated in Heidelberg, where Ochoa found a profoundly changed research focus. During his 1930 visit the laboratory work was "classical physiology," which Ochoa described as “one could see muscles twitching everywhere”.[3] By 1936 Meyerhof's laboratory had become one of the world's foremost biochemical facilities focused on processes such as glycolysis and fermentation. Rather than studying muscles "twitch," the lab was now purifying and characterizing the enzymes involved in muscle action but were involved in yeast fermentation. 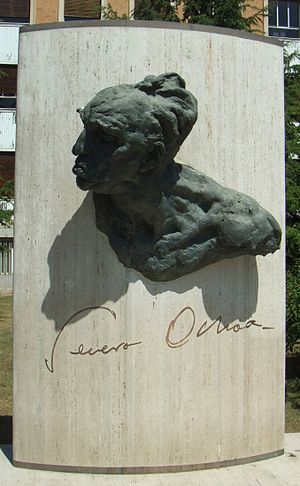 In 1956, he became an American citizen.[5] In 1959, Ochoa was awarded the Nobel Prize for Physiology or Medicine for his work on the synthesis of RNA. [5]

Long after his death, Spanish actress Sara Montiel claimed that she and Severo Ochoa were involved in an (unconfirmed) romantic relationship in the 1950s, as stated in an interview in Spanish newspaper El País: "El gran amor de mi vida ha sido Severo Ochoa. Pero fue un amor imposible. Clandestino. Estaba casado y, además, no pegaba que él estuviera investigando y yo haciendo películas". ("The great love of my life was Severo Ochoa. But it was an impossible love. Clandestine. He was married, and besides, him doing research and me doing films wasn't a good match.") [6]

Ochoa continued research on protein synthesis and replication of RNA viruses until 1985, when he returned to Spain and gave advice to Spanish science policy authorities and scientists.[citation needed] Ochoa was also a recipient of U.S. National Medal of Science in 1979.[citation needed]

A new research center that was planned in the 1970s, was finally built and named after Ochoa.

The asteroid 117435 Severochoa is also named in his honour.

In June 2011, the United States Postal Service issued a stamp honouring him,[7] as part of the American Scientists collection, along with Melvin Calvin, Asa Gray, and Maria Goeppert-Mayer. This was the third volume in the series.