From Infogalactic: the planetary knowledge core
Jump to: navigation, search
This article is about the city. For the submarine class, see Yasen class submarine.

Severodvinsk (Russian: Северодвинск; IPA: [sʲɪvʲɪrɐdˈvʲinsk]) is a city in the north of Arkhangelsk Oblast, Russia, located in the delta of the Northern Dvina River, 35 kilometers (22 mi) west of Arkhangelsk, the administrative center of the oblast. As of the 2010 Census, the population was 192,353.[10]

The territories around the North Dvina were discovered at the start of the first millennium by Vikings. British and Norman[12] ships came to these places for mining, fur and fishing before the 13th century, but later the climate became colder and access to the northern seas became closed.

The settlement on the site of modern Severodvinsk was first mentioned in 1419, when the Swedes sailed into the bay and burnt down the Nikolo-Korelsky Monastery that stood by the shore. This monastery is believed to have been founded by St. Euphemius, an Orthodox missionary in Karelia. The abbey stood in ruins until 1471, when two sons of Marfa Boretskaya died in a vicious storm; their bodies were recovered on the beach near the monastery twelve days later. At the urging of Boretskaya, the monastery was restored and her sons were buried there.

On August 24, 1553, a ship of Richard Chancellor reached the salt-mining settlement of Nyonoksa, which is still famous for its traditional wooden architecture. The British sailors visited the Nikolo-Korelsky Monastery, where they were surprised to find a community of "sailors in soutanes (cassocks)" and a pier large enough to accommodate several ships. The main church of this extraordinary establishment was dedicated to Saint Nicholas, the holy patron of sailors; hence, the whole White Sea became known in 16th-century English maps as "St. Nicholas Bay". In late 1613, during the Time of Troubles, Severodvinsk with the monastery was captured and looted by Polish-Lithuanian vagabonds, the Lisowczycy.

The Nikolo-Korelsky Monastery flourished after the establishment of the Muscovy Company, as the bulk of their trade passed through the local harbor. In August 1618, the harbour was visited by John Tradescant the elder, who conducted a survey of an island situated opposite the monastery. This island became known to the British as "Rose Island", because it was there that Tradescant found an exceedingly rare plant which he named "Rosa moscovita" and brought back to London.[15] 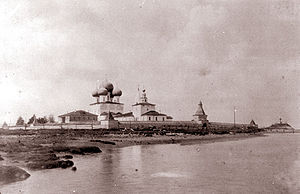 View of the Nikolo-Korelsky Monastery in the early 20th century

The surviving buildings of the monastery were constructed at the close of the Muscovite period. The five-domed cathedral of St. Nicholas was built in 1670-74, preceded by the Assumption church (1664–1667), to which it is joined by a gallery. Several decades later, the walls and towers were built of timber; the best preserved of these towers was transported by the Soviets to Kolomenskoye, Moscow, where it still remains.

Severodvinsk is the second largest city in Arkhangelsk Oblast. Its main industry remains defense related — the construction and repair of submarines at the huge Northern Machinebuilding Enterprise-SEVMASH (Северное Машиностроительное Предприятие-СЕВМАШ). The Soviet Union's first nuclear submarine Leninsky Komsomol was built here in 1957 and at the beginning of the 1980s, the world's largest submarine, Typhoon class submarine, was also built here, later recorded in the Guinness Book of World Records.

The modern city of Severodvinsk was developed in the Soviet period. As it began to be built it was called Sudostroy (Судострой).[12] It received town status in 1938 and until 1957 was named Molotovsk (Молотовск), after Vyacheslav Molotov.[12] On September 12, 1957 it was renamed Severodvinsk.

During World War II, a significant portion of the materials delivered to Russia by the Arctic Convoys to Murmansk and Arkhangelsk were unloaded in Severodvinsk. For example, the Empire Elgar, a British heavy lift ship that arrived in Arkhangelsk with convoy PQ16 and subsequently spent eight weeks unloading ships from the ill-fated convoy PQ17.

A Russian naval base supports the sea trials of nuclear submarines from the major submarine construction (64.5817 N, 39.8307 E) and repair facilities located in the area. In Soviet times the 17th-century buildings of the Nikolo-Korelsky monastery, located on the territory of the shipyard, were adapted and used for shipbuilding purposes.[16] In recent years the monastery buildings, specifically the main church, have been restored and re-consecrated. Church goers attending services have to be shipyard workers or able to obtain a pass to enter the church portion of the shipyard.

Severodvinsk is an access restricted town for foreign citizens. A special pass is required.[17]

From 1950 until 1990, high-tech industries generated demand for a considerable quantity of suitably qualified experts and workers which prompted growth in population. Since 1992, the population has declined due to economic crises and unemployment that has provoked significant migration from the city.

The main role of the city has been, and remains, the production and repair of submarines and military ships. During the Cold War, the city prospered, but with the decline and break-up of the Soviet Union and the end of the Cold War the city has declined. The city's large military enterprises have survived the economic crises of the 1990s and have adjusted to new economic conditions. Severodvinsk now has the largest shipbuilding yard in Russia for large ships (tankers, cargo ships). 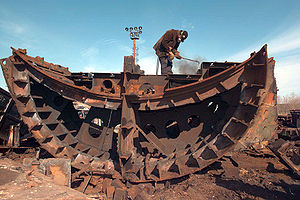 Disassembly of a Soviet submarine in Severodvinsk, as part of the Nunn-Lugar Cooperative Threat Reduction Program

core line of business is the construction and repair of submarines and other naval ships, as well as civilian vessels and oil platforms

Repair of submarines, military and civil ships, construction of oil platforms and faceting of diamonds.

Manufacture of road-building equipment and snow-ploughs.

Severodvinsk is the terminal station of a railway line which splits of at Isakogorka station from the line connecting Moscow and Arkhangelsk.

The Kudemskaya narrow-gauge railway in 2010 has appeared in Forbes ranking, of 10 most beautiful railway routes of the world. 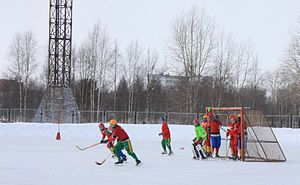 It has a youth bandy team called Sevmash.[20]

In the city there are thirty-two schools, a school for handicapped children, school for orphans, legal school.
School #17 grows regular winners of Russian Olympiads in Physics, many of whom upon completion enter Physics departments of best Universities of the country. Gymnasium #14 is the best Foreign Language school in the city.[citation needed]

The city hosts branches of the following institutions:

There are approximately twenty monuments and memorial complexes in the city, including:

Fifteen objects in Severodvinsk are protected as cultural heritage monuments[21] In particular, the Nyonokotsky Pogost in the village of Nyonoksa is protected as an architecture monument on the federal level. This is one of the few surviving triple wooden church ensembles, consisting of two churches (a bigger, not heated, church used in the summer, a smaller, heated church used in the winter) and a bell-tower. Nyonoksa was also notable for salt production.

In addition, the wooden St. Nicholas Church, currently located on Yagry Island in the northern part of Severodvinsk, was relocated there in 1990s and was the first religious building open in the city. The church was built in the end of 19th century in the village of Solza about 20 kilometers (12 mi) from Severodvinsk.

Severodvinsk is twinned with: