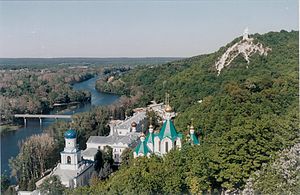 View of the Donets and Sviatohirsk Lavra, the Holy Mountains. 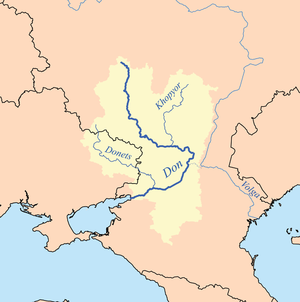 The Siverskyi Donets (Ukrainian: Сіверський Донець) or Seversky Donets (Russian: Северский Донец), usually simply called the Donets, is a river on the south of the East European Plain. It is the fourth longest river in Ukraine. Donets originates in the Central Russian Upland, north of Belgorod, flows south-east through Ukraine (Kharkiv, Donetsk and Luhansk Oblasts) and then again through Russia (Rostov Oblast) to join the Don River, about 100 km (62 mi) from the Sea of Azov. The Donets is the fourth largest river in Ukraine and the biggest in the Eastern Ukraine. It is an important source of fresh water in the east of the country. It gives its name to the Donets Basin, known commonly as the Donbass, an important coal mining region in Ukraine.

In the 2nd century CE Ptolemy knew the Don River, into which the Donets flows, as Tanais,[5] and Western Europeans recognized that the Don had a significant tributary which they called either the small Tanais or Donetz.[6] The Slavic name of Seversky Donets derived from the fact that the river originates from the land of Severians. As the Italian-Polish chronicler Alexander Guagnini (1538-1614) wrote: "There is also another, small Tanais, which originates in the Seversky Principality (for this reason it is called Donets Seversky) and flows into the large Tanais above Azov".[7]

The Donets originates on the Central Russian Upland, near Podolkhi village, Prokhorovka area, north of Belgorod,[11] at an elevation of 200 m (660 ft) above sea level. Its basin contains over 3000 rivers, of which 425 are longer than 10 km (6.2 mi) and 11 are longer than 100 km (62 mi); 1011 of those rivers directly flow into the Donets.[12][13][14] These rivers are mostly fed by melting snow, and thus the water supply is uneven during the year. The spring flood lasts about two months, from February to April[2] - during this period the water level rises by 3 to 8 m (9.8 to 26.2 ft). Excessive flooding is rare due to abundant artificial water reservoirs constructed along the river.[14][15] 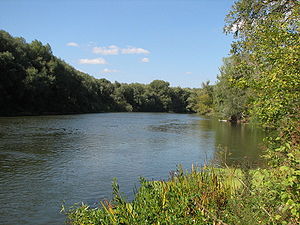 View of the Pechenga Reservoir from space

In the upstream, above Belgorod, the river contains several dams and small reservoirs. In the downstream, after the confluence of the Wolf River (Volchiya River), there is Pechenihy Reservoir (volume 86 km3)[2] which supplies water to the city of Kiev. Below Pechenga Reservoir, Donets is fed by Udy and by its largest tributary Oskol. There the valley widens and contains numerous oxbow lakes in its floodplain. Within Ukraine, the river flows between the Cisdesna plateau[17] and the Donets lowland.[17] In its middle, the river is partly fed by the Dnieper River waters which are brought though the Dnieper–Donbas–Seversky Donets channels which provide water to the coal industry of the Donets Basin, usually called the Donbass. Near the Russian city of Donetsk (Rostov oblast), the river crosses the Donets Ridge and flows in a narrow valley with steep and rocky slopes. In the lower part of Donets lowland,[17] the flow is interrupted by sluices and is slow. At the delta it splits into three distributaries.[2]

Drawing of a Stone Age tool found near the village of Krasny Yar, Luhansk Oblast.[19]

The river played a crucial role for its ancient settlers as a source of water and food, means of transportation and trade route. The first archaeological evidence of settlers relates to Cheulean and Acheulean periods of Lower Paleolithic through stone tools (axes) found on the river banks near Izium city of Kharkiv Oblast and in Luhansk Oblast.[20] Over the ages, the river banks were populated by tribals of various cultures, including Mousterian, Yamna, Catacomb, Scythian, Alan, Khazar and later Slavic cultures. Many of the related tribals had nomadic lifestyle characteristic of Kipchak people, Golden Horde and later of Cossacks. The river flows through the historic lands of Sloboda Ukraine as well as the lands of Don River Host. The many Cossacks became later assimilated into the strengthening Russian Empire, which had rebuilt and reinforced the fortress of Belgorod and cities of Kiev, Izium, Luhansk, Chuhuiv and others in order keep defensive lines against the raids of nomads from the south-east. Later, the protective role of the river basin gave way to economic needs. In the 18th–19th centuries, the river was extensively used for watermills, which numbered by hundreds by the end of the 18th century, and the mill dams interrupted navigation on the river.[21]

Industrialization in the 19th century shifted interests to mineral exploitation in Donbas, with water-hungry plants concentrated mostly in Kiev, Luhansk and Donetsk.[22] Already by the 1930s, Kharkiv, Donetsk and Luhansk were lacking water forcing the authorities to gradually create a network of canals and reservoirs. In 1936, the Kochetok Reservoir was created and coupled to the water system of Kharkiv.[14] By the 1950s, this measure proved insufficient, and in the 1960s, Pechenga Reservoir was constructed in place of the Kochetok Reservoir. It has with the capacity of 400 million m3 and provides about 75% of water consumed by Kharkiv. To supply water to southern Donbas and Donetsk, the 130-km long Donets-Donbass channel was built around 1958 starting near Raigorodok city,[2] and in compensation, the Dnieper-Donbass channel was created to supply water from Dnieper River to the upstream of the Donets via the Bereka River.[23] As a result of the industrial activity, the wild nature of Donets Basin transformed into an industrial settlement.[24][25] After the breakup of the USSR, most of the basin territory became part of Ukraine.

Currently, with the War in Donbass, Luhansk Oblast is roughly split along the river between the Lugansk People's Republic controlling most of the portion of the oblast south of the Donets, and the Ukrainian government with the territory north of the Donets. 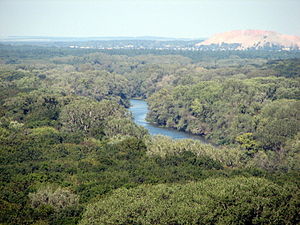 Donets in Luhansk Oblast, near Shypylivka.

Being one of the largest rivers in Ukraine, the Donets is very intensively used in farming and industry. Ukraine alone uses more than 2 km3 (0.48 cu mi) of river waters per year, half of which is returned as polluted discharges; this consumption effectively reduces river runoff by 32 m3/s (1,100 cu ft/s).[16]

Donets suffered greatly even back in the 18th century, when old oaks were cut down along its banks.[29] The industrial development of the 19th century reduced the groundwater levels of the basin. This resulted in shallowing of the river and slowed down navigation. Until the mid-19th century, the river was rich in fish which population rapidly declined since then.[14] The water quality is graded as level IV (polluted) to V (dirty). The main pollutants are fertilizers, petroleum, phenols, zinc, chromium and copper.[30][31] In Kharkiv Oblast, water is contaminated by industrial and communal wastes of Belgorod, Izyum and Shebekino cities, but the water is partially purified through the Pechenga Reservoir. The density of plants and thus the contamination increase downstream in Donetsk and Luhansk areas, especially around Lysychansk and Sievierodonetsk, about 400 km from the mouth. Some tributaries of the Donets, such as Kozenyi Butt, Bakhmut and Lugan are so polluted that consuming fish caught there is dangerous.[16] The purest segment of Donets is between the source and Belgorod, and between the Pecheneg Reservoir and Chuhuiv. Average water salinity is 650–750 mg/L, and it increases in winter to 1000 mg/L mostly due to industrial wastewater.[32] 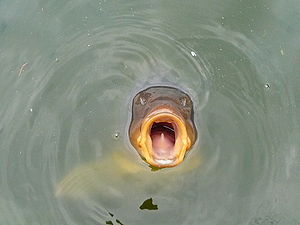 The Donets hosts 44 species of fish, predominantly small fishes such as European perch, rutilus and common rudd. Medium and large species include bream, perch, catfish and pike and are becoming increasingly rare.[14][33] Near Pechenga Reservoir a large hatchery of carp has successfully operated since 1967.[34] 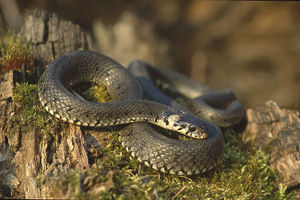 On the banks of the river, in the floodplain wetlands, there are abundant water frogs, toads (especially green toad), smooth and great crested newts[35] and less common grass snake, dice snake and European pond terrapin.[24]

Human activities, mainly cultivation of the steppes, resulted in the disappearance of animals formerly common in the basin, such as tarpan, steppe antelope, saiga antelope, marmots and others.[24] Back in the 1960s–1970s, especially near Oskol River, it was not unusual to meet bobak marmot, Eurasian deer, wild boar and Russian desman.[34] Current mammals of the basin include European beaver, Dipodidae, suslik, mice, European otter, European mink, weasel and bats.

The number of bird species of the river basin reduced sharply over the past 100–150 years. The disappeared species include steppe eagle, tirkusha, sociable lapwing, bustard, black and winged lark. Less common are geese, swans, golden eagle, white-tailed eagle, peregrine falcon, honey buzzard and osprey. The reduction is mainly caused by the destruction of forests, especially old groves along the river banks.[34] The creation of artificial forest belts (windbreaks) in the basin in the 1960s brought insectivorous birds new to this area, such as Streptopelia, European magpie and shrikes.[34] From the traditional bird types, still common are several species of ducks, crows, Charadriiformes, Podiceps, great reed warbler and much less common are herons and storks. Only 12 individuals of demoiselle cranes remain in the area, near Svyatogorsk city. During the migratory season, the region is visited by greylag and black geese.[24] 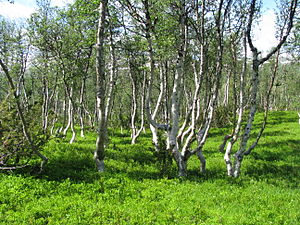 Banks of the river used to contain groves of trees, which were cut during the 18th–19th centuries. Some of the trees were used for shipbuilding during the Russian-Turkish wars in the time of Peter I.[29] By the 20th century, most meadows along the river banks were converted into farmers' fields. Only a small part of the old groves remains, mainly in the Kharkiv Oblast. North of Izium, there are still broadleaf forests, and pine forests are found near Chuhuiv. Many species of wild plants survive near floodplain wetlands. These include willow, downy birch, alder and krushinnik. Along the river banks, there are cane, swamp horsetail, carex, kizlyak, swamp sabelnik and other types of grass.[24] 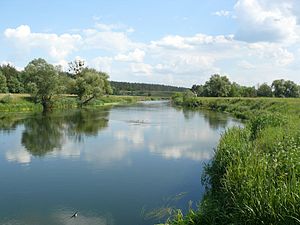 The Donets is regarded as one of the most scenic rivers of East European Plain and contains many hiking and biking routes along its banks. Canoe rafting is rather popular, especially between Zmiyev and Svyatogorsk. Rafting is of the first (lowest) degree of difficulty. The busiest tourism months are from May to September.[36] The most picturesque part is probably near the town of Izium, which hosts a National Park of Holy Mountains.[24] Down to Lysychansk, the water is clean for swimming, and there are many sandy beaches on the shores. Near Pechenga Reservoir, there are several health resorts.

Satellite pictures from the source to the mouth